Is the valency of carbon satisfied in graphite?

Graphite has hexagonal parallel planes. In a hexagonal structure the carbon atom has three bonds. Since the valancy of carbon is 4 is the valency satisfied in graphite?

In the hexagonal graphite structure the carbon atoms are $\ce{sp^2}$ hybridized, just like in benzene. In graphite, this p-orbital is used for bonding just as it is in benzene, resulting in an extended pi system in the graphite structure. Graphite is really just a large number of benzene rings annelated together to form a continuous, ring structure. Just as carbon satisfies its valence requirement of 4 in benzene (3 sigma bonds and 1 pi bond), carbon's valency requirements are satisfied the same way in graphite. 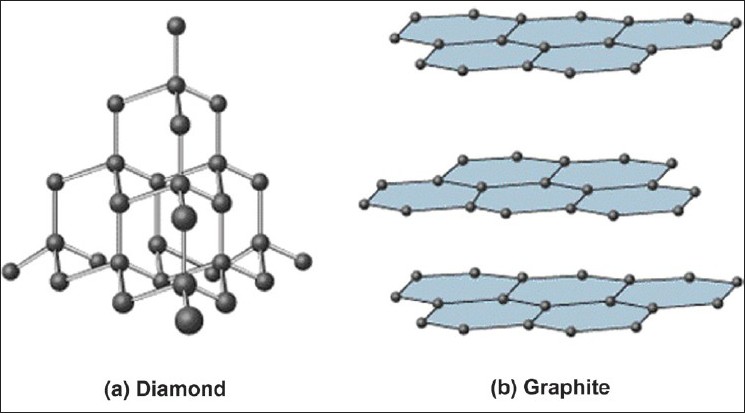 Just as much as in benzene or any other $\mathrm{sp^2}$ carbon case. The concept of valency doesn't mean that the given atom has to form bonds with the given number of neighbors, but refer to a simple way of counting electrons and formed bonds.

The situation of benzene is a little trickier, as it does not have a double or a single bond between the carbons. If the carbons would form a single bond, there would be a extra dangling electron remaining on each of them. In reality these electrons are delocalized (shared) over the whole ring. If you count the valence electrons of a carbon, you should count this delocalized electron, too. You can understand graphite along this line: three bonds to the three neighbors plus the remaining one valence electron delocalized over the ring system (the whole graphite sheet) are together gives back the four valence electrons.

You can find more on hybridization in the other answer.

Not the answer you're looking for? Browse other questions tagged bond structural-formula carbon-allotropes or ask your own question.

-1
Does graphite have double bond?
57
Are diamonds really forever?

15
Edges of graphite
29
Electrical conductivity of graphite
9
Structure of carbon fiber
7
Molecular differences in the HB graphite hardness scale
30
Are graphite and hexagonal boron nitride aromatic
2
Delocalised electron in graphite
3
Why is fullerene 60 an insulator while graphite is a conductor?
10
Why do diamond and graphite have different structures, when they are both composed of carbon?
0
Graphite: Thermal and electrical conductivity
7
Why is graphite brittle?