What is the mechanism for this intramolecular SN1 reaction?

What is the mechanism for the following intramolecular $\mathrm{S_N1}$ reaction?

For this question, my professor hinted at an intramolecular reaction, and he asked us to recall the bromonium ion as well. As such, I believe the $\ce{SMe}$ group attacks the open carbocation when $\ce{OTs}$ leaves. I think I understand how the left-side enantiomer is formed: $\ce{SMe}$ attacks the open carbocation, then water attacks from the back because the front-side is occupied by the hydrogen (not shown). However, what is the mechanism for the right-side enantiomer? How does the $\ce{SMe}$ end up in front (on a wedge) along with water after hydrolysis?

You are correct on your initial assumption. This hydrolysis is assisted by the neighboring thiomethoxy group ($\ce{SCH3}$) as depicted in the following scheme: 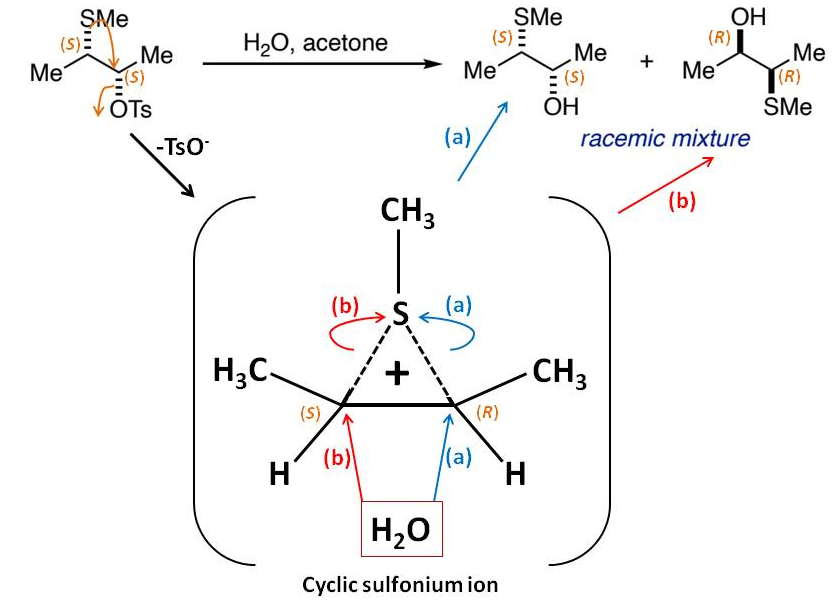 The cyclic methylsulfonium intermediate, which is achiral in this case, is a mimic of bromonium ion in bromination of alkenes (also see Chemistry of Sulfur Mustard on releasing chlorine through cyclic alkylsulfonium ion). Realistically, this intermediate is mimic of bromonium ion of of cis-2-butene (also achiral), and hence would give a racemic mixture. Similar to bromonium ion intermediate, the upcoming nucleophile ($\ce{H2O}$) can attack at two places: through path $a$ or through path $b$. Keep track on the (R,S)-configurations of two stereo centers. The original compound has (S,S)-configuration. The (S)-configuration on carbon attached to $\ce{SCH3}$ is unchanged but carbon attached to $\ce{OTs}$ has been changed to (S)-configuration in cyclic intermediate, because it is necessary to have an anti-periplanar conformation for attacking group ($\ce{SCH3}$) and leaving group ($\ce{OTs}$), similar to $\mathrm{E2}$ mechanism.

As a result, you get racemic mixture.

The key, as emphasized in Zhe'a comment to Mathew's answer, is that the cyclic intermediate is achiral. This ensures a perfect racemic product mixture ("erasing" the stereochemical information, i.e. you could have started with the other enantiomer as a reactant and obtained the same product mixture).

Here is a 3D rendering of the stereochemistry of the carbon atoms in the intermediate (ignore the geometry around the sulfur):

In the orientation shown, oxygen would attack from the bottom while the methyl sulfide group would remain on the top of the cisoid conformation. In one case, you have a double displacement with retention of configuration, and in the other case single displacements on both carbon centers, inverting both:

Rotating around the central carbon-carbon bond would give the product conformations as shown.

Not the answer you're looking for? Browse other questions tagged organic-chemistry reaction-mechanism molecular-structure nucleophilic-substitution or ask your own question.

6
What are the products in this SN1 reaction?
2
Can someone confirm and/or correct my logic regarding this mechanism?
11
What is the mechanism for this reaction?
10
Why does a proton prefer to attack a double bond instead of protonating an alcohol in a reaction of unsaturated alcohol with sulphuric acid?