Importance of halogens and nitrogen in degree of unsaturation

Why is oxygen (or other elements) isn't present in the formulae for calculation of the value of degree of unsaturation $(\mathrm{DU})$ as it usually more common than nitrogen and halogens.

where $C,$ $H,$ $N,$ $X$ are the numbers of carbon, hydrogen, nitrogen and halogen atoms present in the compound, respectively?

So here is the method I learned years ago without memorizing an awkward formula. The concept is to reduce the molecular formula to a hydrocarbon and compare it to the most saturated hydrocarbon bearing the same number of carbon atoms. Consider the infamous free-base, hydroxychloroquine, $\ce{C18H26ClN3O}$. 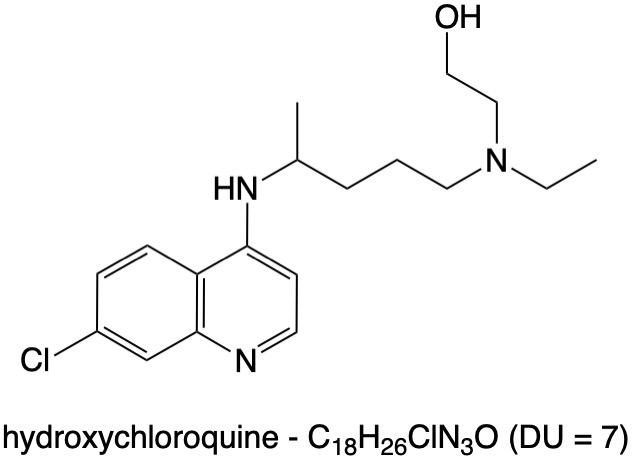 As to the question as to why oxygen is dropped from the equation, if the oxygen in hydroxychloroquine weren't there, the degree of unsaturation would still be the same. For example, the Degrees of Unsaturation of tetrahydrofuran and cyclobutane are the same, D.U. = 1.

The degree of unsaturation is defined as the index of hydrogen deficiency (IHD) that determines the total number of rings and π bonds. It means the removal of two hydrogen atoms from a molecule is equal to one added $\mathrm{DU}.$

If you add a halogen to a molecule, you need to remove a hydrogen atom (decreased half-one $\mathrm{DU}).$ If you do the same for a nitrogen atom, you need to remove a hydrogen atom from the molecule and add two others to the nitrogen (for amines as a saturated substituent), so you have one more hydrogen (increased half-one $\mathrm{DU}).$ As a result, the number of halogen and nitrogen atoms must be considered in the equation, but about other atoms such as oxygen $(\ce{C-OH})$ and sulfur $(\ce{C-SH}),$ there is no change in the total number of hydrogen atoms when adding them as saturated substituents to a molecule.

In the case of the unsaturated substituents such as imines and carbonyls, it's clear that the total number of hydrogen atoms decreases, so the $\mathrm{DU}$ increases.

Not the answer you're looking for? Browse other questions tagged organic-chemistry bond or ask your own question.

15
Derivation of formula for the degree of unsaturation
13
Which elements can be diatomic?
2
Heating organic compound in a stream of nitrogen gas
1
Detection of oxygen by Lassaigne test
8
When would a R-O-R bond be linear?