How would I find R/S configuration in this case?

I know about the rules to assign R/S configurations when the orientation of each bond to the central Carbon atom is given- the whole, give them a priority order based on their Atomic number/masses, move the group with the least priority as far as possible from the eye, and then draw an arrow joining the other groups in order of their priority. If the arrow goes clockwise, it's an R configuration, otherwise it's an S configuration. But how would I do the same when the orientation of none of the groups are given? The answer key says that compounds I and II have R orientation- but when I simply apply the steps above to the compound I, I get S. How do I do this? https://imgur.com/a/K57fCJL is the question 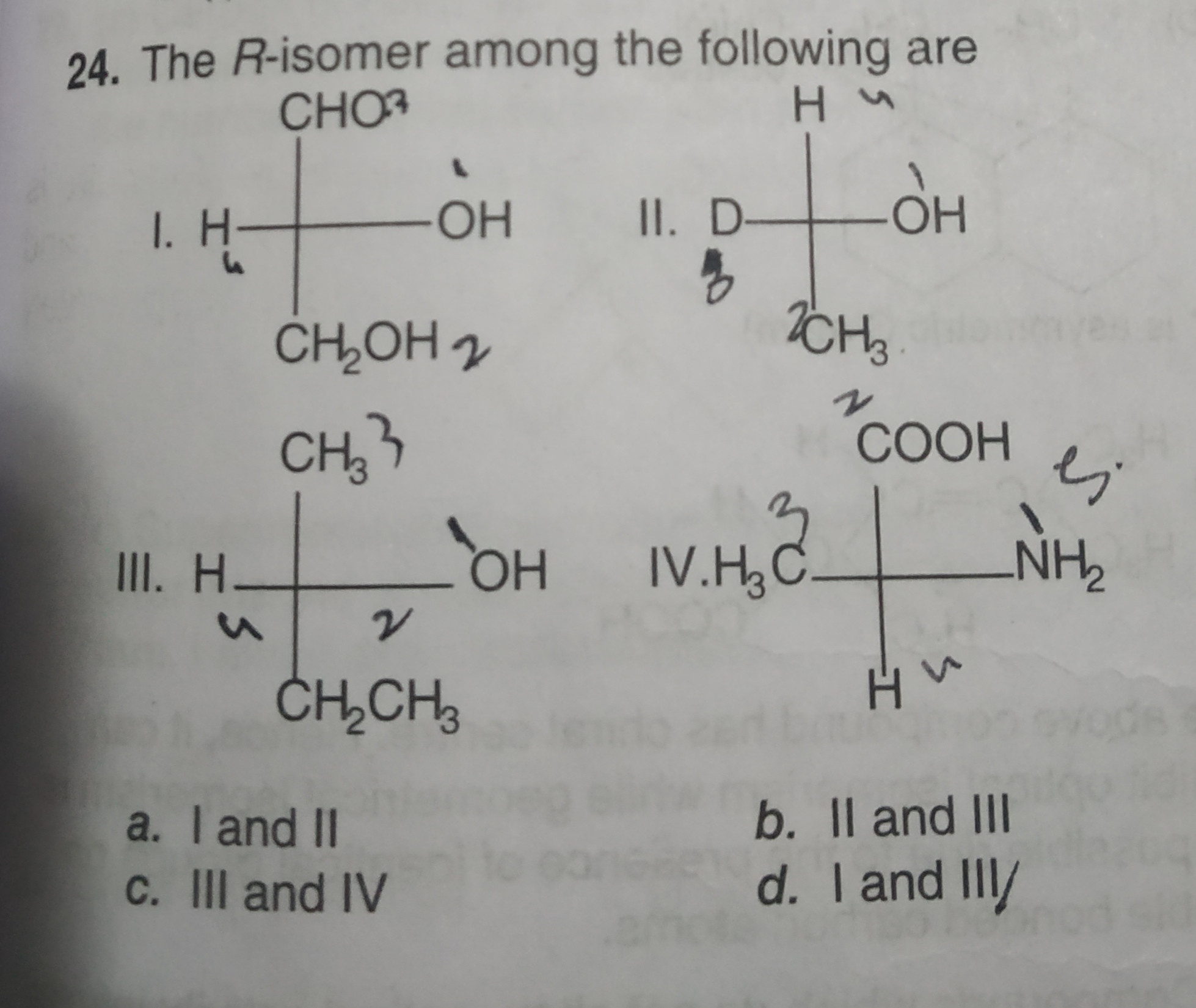 Instead of using the rule that we have to consider the opposite rotation (while moving the fingers from the more priority group to the less priority), when the least priority is in front of the observer. You can visualize it this way, when you see the the compound I, drawn on paper, then $\ce{H}$ and $\ce{OH}$ is towards you and $\ce{CHO}$ and $\ce{CH2OH}$ is away from you and the rotation is counterclockwise. But when you see the same compound below the paper, the $\ce{H}$ and $\ce{OH}$ is away from you and $\ce{CHO}$ and $\ce{CH2OH}$ is towards you, but now the rotation is clockwise. So now we consider this rotation to say that it is in R configuration.

Hence the 'pushing $\ce{H}$ as far as possible' thing is done when $\ce{H}$ is on dashed bond (into the screen). Just use the rules of Fischer projections and change the molecule to the form which you feel most comfortable to determine R/S configurations.

I think you have a problem with assigning priority order in these groups. Actually, we assign priority according to the atomic number. Let's say you have two $\ce{CH3Br}$ and $\ce{CH3Cl}$. Now look upon the first atom of both the group. If both the group have the same atomic number then move to next. If there is a double-bonded atom, like $\ce{O}$ so if it is like $\ce{=O}$, then we would treat it like $\ce{-O-O}$. And then same priority rule according to the atomic number will continue, and clockwise rotation will give R and anti-clockwise rotation will S. If you jump hydrogen while moving clockwise or anti-clockwise, then R is converted to S and S is converted to R. There are some more rules for some typical example. Since you have asked for this question so I haven't mentioned them. You can get the answer.

5
Pseudochirality with more than two groups on one carbon atom
4
Determining absolute configuration when the lowest priority group is not facing backwards
4
E/Z stereoisomers : assigning priorities with a cycloalkane group
5
Determination of (R) and (S) configurations from a Haworth projection
4
How to wedge d/hash notation a molecule?
11
Friedel–Crafts alkylation of benzene with tetrachloromethane
8
Assigning R/S configuration
0
IUPAC nomenclature of cycloalkadienes with substituents and alkenes on the same carbons
2
Determining R-S configuration with lowest priority groups in plane of paper