Number of octahedral and tetrahedral voids present in a HCP structure

The given image depicts the tetrahedral and octahedral voids in HCP structure. 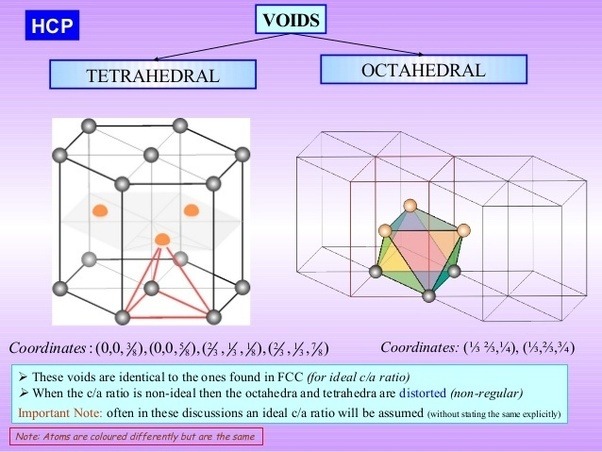 For the tetrahedral part

I figured out that there would be 6 tetrahedral voids in total.

My visualisation: In the image, 3 inverted and 3 upright tetrahedron can be formed. Is this correct?

For the octahedral part

It is hard to visualise the octahedrons for an atom. And so, I can't figure out the number of octahedral voids in HCP.

Also, I want to calculate how much part of the octahedron (see figure) is in each HCP structure.

Finally, the image shows only one octahedron. Can you help me in visualising the other octahedrons?

My visualisation: In the image, 3 inverted and 3 upright tetrahedron can be formed. Is this correct?

It is correct that there are inverted and upright tetrahedra. In the picture above, the T's squeezed between red circles are inverted, and the T's between pink circles are upright.

I can see eight tetrahedra with their center in the unit cell reposted below. Six have one of the orange atoms (in the image posted by the OP) as their tip, and two have all orange atoms as their base. 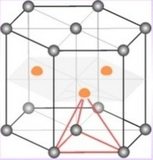 Complicating things, there are also tetrahedra with their center at the edge of the unit cell, making counting them difficult (see below).

It is hard to visualise the octahedrons for an atom. And so, I can't figure out the number of octahedral voids in HCP.

The atoms forming the octahedral coordination sphers are hard to visualize in the picture of the question because the unit cell does not fully contain a full set of six. Here is the view from the top again, with the base of the unit cell shaded (red circles correspond to orange atoms in the unit cell shown form the side): 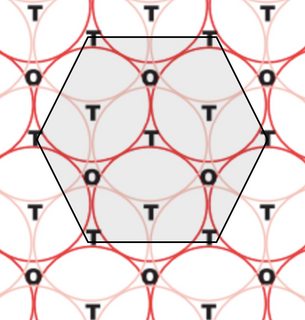 Because we are only showing two layers of atoms, this reflects only half of the unit cell. In this half of the unit cell, there are three voids with octahedral coordination. To visualize them, you need three "pink" atoms at the base of the unit cell (the center one and two vertices of the hexagon) and three "red" atoms (located at c = 1/2, i.e. the second hexagonal layer). Of these three, two are in the unit cell and one is in a neighboring one. If you complete the unit cell by adding another layer, you get a total of six octahedrally coordinated voids in the cell. Because none are on the edge of the cell, this is the total number.

Also, I want to calculate how much part of the octahedron (see figure) is in each HCP structure.

I'm not sure how to do that. I can say that two of the coordinating atoms are in our unit cell, one is in the neighboring cell, and three are on the border of the unit cell. So the larger part of the volume is probably within the unit cell.

Number of octahedral and tetrahedral voids present in a HCP structure

We already know that there are 6 octahedrally coordinated voids per unit cell. Let's get the ratio of the two types of voids. If you look at the "red/pink" pictures, you notice that T's and O's come in horizontal rows, with one row of O's next to two rows of T's. So there are twice as many T's than O's, or 12 tetrahedrally coordinated voids per unit cell.

You can also figure this out in a more complicated way. There are 8 T-voids with center inside the unit cell, and 12 T-voids with center on the edge. These are shared among three unit cells touching at these centers (3-fold axis). So the math is 8 plus (12 divided by 3) is a total of 12, as we already figured out.

Or you can make an argument how many tetrahedral coordination spheres an atom partakes in. Each atom forms the tip of two (up and down) and the base of six (three directions, up and down), that is eight. A tetrahedron has four vertices, so two tetrahedra per atom. The unit cell contains six atoms, so twelve tetrahedra per unit cell.

Shape of the voids and visualization: Distinguishing between octahedral and tetrahedral holes

Not the answer you're looking for? Browse other questions tagged physical-chemistry solid-state-chemistry or ask your own question.