How to predict and measure excess values of reactivity ratios for copolymerization with three monomers?

I ask this question because I haven't found interesting literature on the subject and I would like to know if my way to think is good or pure bullshit. Also the question is quite long because I have to expose my whole problem and I had some trouble to make it perfeclty clear in a short text.

I'm currently in internship in a R&D emulsion polymerization group and I started to read the chapter about copolymerization in the book "Principe ofpolymerization, 3rd Ed" by George Odian. So I won't say that I'm very familiar with that topic at the moment. I will also develop in my question what I will call "excess values" related to what I already learnt in thermodynamics but I am only using these as it is, I think, better for the understanding; but not for thermodynamics purpose.

Also I haven't found a lot of questions about copolymerization here so I will first introduce a bit the topic in relation to my question.

I mention first that I am only speaking about countinuous feed reactors i.e. the molar ratio or my monomers reamain the same during all the reaction (except the end and the beginning).

In the system of copolymerization, we have two monomers, called $\ce{M1}$ and $\ce{M2}$. We want to know how the final molar ratio of each monomers in the polymer depending on the initial molar ratio of these monomers. During the polymerization, the growing chains may either end with a $\ce{M1^*}$ or a $\ce{M2^*}$ (can be ions or radical) (these previous notations denote the whole growing chains). Then we have the four following possible reactions:

where $k_{ij}$ are the kinetic constants of the reactions.

and then doing calculation of kenitics playing with the rate of consumption of both monomers and a steay-state approximation for both of them, one can find the "copolymerization equation" as called by George Odian":

where $[X]$ denote the concentration of $X$.

And then finally get, 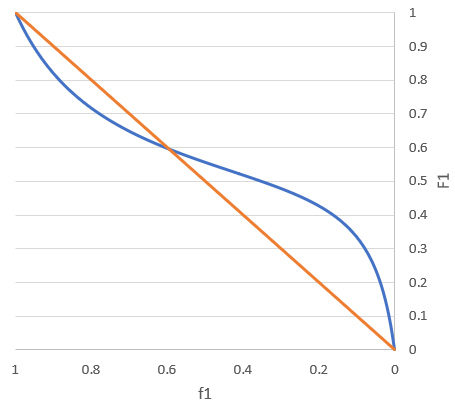 So now let called what I discussed before an ideal system, as it is "easy" to determine the reactivity ratios for only two monomers in presence. I will call "real" the case in which we "perturbe" the ideal system with a third monomer $\ce{M_3}$ in a small amount compare to the total of the two others. I would like to know how this new system of monomer behaves as I would like to be able to predict some propterties of my final polymers without making too much experiments and I also would like to generalize this method for more monomers in the mixtures.

In the following ideal will be abbreviate by $id$ and real by $\mathbb{R}$.

Is it possible to determine with accuracy the new value of $r_1^\mathbb{R}$ and $r_2^\mathbb{R}$ in reference of their values $r_1^{id}$ and $r_2^{id}$ in the ideal system and corrected by an excess value for each of them?

My idea is to use for example an FTIR to determine $F_1^\mathbb{R} = F_1^{experimental}$ for different values of $f_3$ so that I could define the excess values in function of this third monomer and then predict the reactivity of the whole system knowing the reactivity of the ideal system.

For the moment I feel like I found a mine of gold but I would like to know the thought of other people with better knowledge than me on that question. I don't know that much about FTIR though but I know this is not always super accurate in complex systems. Do you think this should work (I can't do the experiment as this is not the purpose of my internship) or is this more "bullshit"?

Browse other questions tagged experimental-chemistry polymers reactivity reaction-control or ask your own question.

2
Flory Huggins Theory
1
How can you predict a double displacement reaction with no precipitate?
1
How are reactivity and dipole moment related?
0
How to measure and transfer sticky solids
0
How to measure and transfer suspensions?
1
Temperature and pressure for three phase equilibrium of aqueous sodium chloride solutions
2
Reactivity of different alcohols with NaNH2 and CH3I