I know soap molecules form micelles. Do they also form liposomes in water? I need the reasons too.

Liposomes are a lipid bilayer separating an aqueous internal compartment from the aqueous phase. Micelles are closed lipid monolayers with a fatty acid core and polar surface, or a polar core with fatty acids on the surface (inverted micelle, Aerosol-OT). A soap would then form a micelle but not a lipsoome for its ionic water-soluble head.

Amphiphiles spontaneously form a variety of self-assemblies in water, such as micelles, vesicles, and bilayers. The simplest form of self-assembly for single chain amphiphiles are micelles.

The concept of packing parameter proposed by J. Israelachvili allows a simple and intuitive insight into the self-assembled aggregates of amphiphiles in water

where $v$ and $l$ are the volume and length of the surfactant hydrophobic tail, respectively, and $a_0$ is the optimal surface area per amphiphile.

Let me briefly explain the concept of optimal surface area per amphiphile ($a_0$). It is based on the principle of opposing forces; the hydrophobic interactions act to pack the soap molecules closer together to avoid exposing their hydrophobic tails to water, while the repulsive energy between the charged headgroups of the soap molecules increases as molecules are pushed closer together. The surface energy of the self-assembly is minimized when the amphiphilic molecules occupy the optimal area.

Single-tailed amphiphiles (like your soap molecules) have a large head-group area and have a packing parameter $P < \frac13$. Thus, they form spherical micelles. Ionic surfactants such as sodium dodecyl sulphate (SDS/NaDS) generally forms spherical micelles in solution at low salt concentrations. Single-tailed amphiphiles with a small head-group area ($\frac13 < P < \frac12$) will form elongated or cylindrical micelles. Non-ionic surfactants and ionic surfactants such as SDS and CTAB in high salt are known to form elongated micelles. Double-tailed amphiphiles with a large head-group area (phosphatidylcholine, phosphatidylserine, phosphatidylinositol etc) have a packing parameter approaching unity and tend to self-assemble into planar bilayers and vesicles/liposomes.

The figure here will explain this schematically: 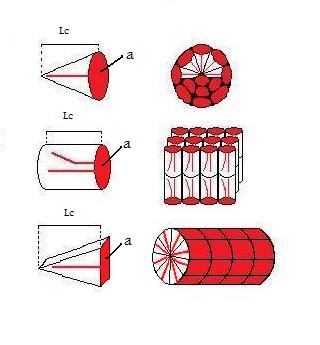 11
At what amount is digesting soap unhealthy?
2
Soap versus Shampoo
0
Boiling dish soap
2
Is micelle formation in a soap solution a chemical reaction?
7
What exactly happens while washing clothes
0
Is *rinsing* (after washing) with cold water is as efficient as rinsing with hot water?
14
Is there such a thing as a “minimal soap” molecule?