When do reactions reach steady state?

By definition, the time we're looking for is the time when $\frac{\ln 2}{65}N_R=\frac{\ln 2}{6}N_I$, which is when $\frac{N_R}{N_I}=10.83$ I don't have the formula for the exact amount of the intermediate vs. time memorized, but I don't think the problem required us to know the formula. I tried estimating the amounts of the various species present after 20 hours to see if steady state is actually reached then:

This type of consecutive reaction does not really come to steady state for very long, as seen in the figure, i.e there is only a small time over which $d[mTC]/dt \approx 0$. The decay rate of mTC is faster than that of Mo and so mTc appears quickly and decays slowly. (The amount of mTC is multiplied by 10 in the figure is the amount formed is small].

The maximum amount of mTC, which is assumed to be 'steady state' is found by differentiating.

The time at maximum is $\displaystyle t_m= \ln(k_2/k_1)/(k_2-k_1)$ which is 22.7 hours so the 'steady state' is established just before this and lasts a little past this time. How much in either way is somewhat subjective unless you use a definition of say $\pm 5$ % of the maximum etc. 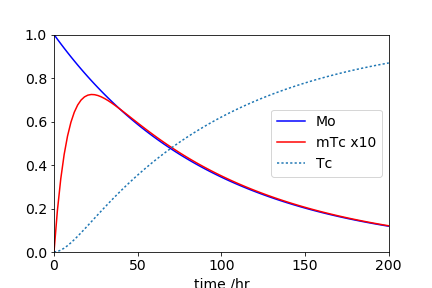 Not the answer you're looking for? Browse other questions tagged kinetics nuclear or ask your own question.