I would like to know what the name is for the structure drawn below. This looks like a pyramid with 4 atoms at each vertex. Does the name of the structure depend on whether the atoms are all the same or if they are a combination of different ones? 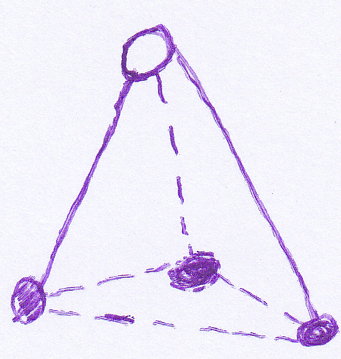 This coordination polyhedron is not to be confused with a tetrahedron (polyhedral symbol: T-4), which applies to a coordination number of four, or an atom that is attached to four atoms or groups.

If the four faces of this shape are equilateral triangles, that would make this shape a tetrahedron (literally meaning four faces). This is the molecular shape associated with the $\mathrm{sp^3}$ hybridization. The shape is independent of what atoms constitute the corners.

12
What's the difference between a tetrahedron and a trigonal pyramid?

8
Are there any chemicals with this structural skeleton?
26
Do vinyl cations adopt a classical or non-classical structure?
12
What is the structure of trifluoromethanesulfonic acid in the gas phase?
3
correct psilocybin molecular structure
1
Is PCl5 really trigonal bipyramidal in shape?
7
Meaning of the term "vertex" in the topic of skeletal formulae
0
What is the 3D shape of an ethane molecule?