I have a substance that is extremely non-polar and therefore does not ionize in the ESI source, which makes it impossible to quantify small amounts. The substance contains only two functional groups, which are a point of attack for possible derivatization. One is an alkyne, and the other is a hydroxyl group. Both groups are attached to the same carbon. Since the substance is to be detected from blood plasma, I decided against derivatization at the hydroxyl group, since numerous side reactions with proteins, which also carry a lot of hydroxyl groups, are to be expected. The alkyne, however, is a good point of attack and is suitable for bioorthogonal reactions. A professor once said about the copper(I) catalyzed alkyne-azide cycloaddition (CuAAC) that this is a reaction that "any fool could manage". I have been trying to get the reaction going for a few days now, but so far, I have not been able to detect any product in LC-MS... Decide for yourself what this says about me as a chemist.

Since I have followed several approaches from papers, I slowly ask myself if my substance is not suitable for a CuAAC. Since the research project and the substance are new and unpublished, I cannot provide a complete structural formula here. But this much can be revealed: It is essentially a steroid, which carries a hydroxy group and an alkyne on carbon C17. 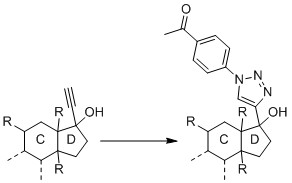 I performed the reaction with the pure substance (i.e. without blood plasma) according to Presolski et al., but I did not use THPTA nor aminoguanidine. All concentrations were used as described in the paper and the reaction was performed at 40°C according to the suggestion under "Troubleshooting". The azide was dissolved in DMF. Thus, there were 10 µL DMF (5%) in the buffer solution.

I also performed the reaction with the pure substance according to Hong et al.. Again, the proposed concentrations were used but neither THPA nor aminoguanidine were used.

I also tested different variations of those protocols with much longer reaction times (8 to 24 hours), more or less temperature, with and without pH 7 buffer.

As far as I know, the 4-substituted 1,2,3-triazoles formed by CuAAC should be extremely stable, even to metabolic degradation (Agalave et al.), so I do not believe that they decomposed so quickly that they were all destroyed by the measurement. To avoid ion suppression, I purified the reaction after the one-hour reaction time by RP-SPE, using the SigmaAldrich/Merck protocol.

The reaction was, in fact, successful when applying the already cited protocol by Presolski et al. and using a DMF-water-ratio of 3:1 and incubating at 60 °C for 2 h. Unfortunately, though, the intensities are pretty weak which means that the reaction turnover is not great. The peak of my original substance is at 9.6 × 107 (50 µM concentration) and the intensity of the derivatized product, which should be way better ionized, is 4.2 × 107.

How to get a better turnover while maintaining a reasonably short reaction time?

To speed up the reaction, you should look at changing (1) the reagents, (2) the catalysts, or (3) the reaction conditions. In particular you might be dealing with poor solubility for your alkyne substrate if you are doing the reaction in aqueous conditions.

You could try the picolyl azides I mentioned in the comments in lieu of the 4-acetophenyl azide you originally tried. These azide reagents chelate copper significantly, thus increasing reaction rates since proximity of two of the three components of the reaction (\ce{Cu+} and aizde) is enhanced by the chelation effect.

There are a variety of exotic $\ce{Cu+}$ organometallic complexes that work better than the "standard" copper salts. An example publication is Sebest et al. 2018, which reports that the N-heterocyclic carbene complex $\ce{[CuI(Mes‐6)]}$ (Mes-6 being an NHC ligand pictured below) worked well at loadings down to 0.05 mol% in their trial reaction. 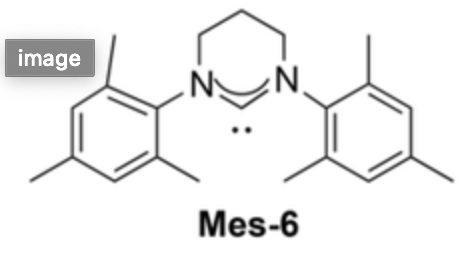 This might be overkill if you are not using the ligand THPTA used in your original protocol. Maybe you could just use that?

You an always heat more, but I think a more important variable is your solvent. Is your reaction solvent one that dissolves all the species, including alkyne, azide, and copper(I) complex? Instead of aqueous conditions, can you try acetonitrile or 100% DMF? Or n-butanol?

If it were me, I'd try getting some THPTA or other ligand to improve $\ce{Cu+}$ solubility in organic solvents, and trying the reaction in non-aqueous solvents where your steroid is likely to be soluble. I'd also get the picolyl azide if my lab could afford it. If that doesn't work, and I still wanted to improve things, I guess I'd look at increasing temperature or using more exotic NHC ligands for the copper.

Not the answer you're looking for? Browse other questions tagged organic-chemistry analytical-chemistry catalysis mass-spectrometry heterocyclic-compounds or ask your own question.