There is only a shift of a hydrogen atom and a pi bond. So why are these two not tautomers?

The molecular geometry argument is pretty common-sensical, and is true to a certain extent. But I don't think it's the cleanest argument. If you look at a typical ketone and its enol, you will notice that the enol has a more constrained geometry than the ketone:

Furthermore, it's not possible to claim that the ketone and the enol have the same geometries in the carbon chain. Many of the bond lengths in the two tautomers will be different: after all one has a C–C (and C=O) bond and the other has C=C (and C–O). Unlike resonance structures, both of these tautomers are things which exist independently, and they have different bond lengths.

The safest way is to go back to the IUPAC definition. That's a bit boring, but when you read these, you can see the effort that has gone into coming up with a definition that is (as far as possible) consistent with edge cases such as these. Tautomerism is defined as (https://doi.org/10.1351/goldbook.T06252):

Isomerism of the general form $\ce{G-X-Y=Z <=> X=Y-Z-G}$ where the isomers (called tautomers) are readily interconvertible.

Acrolein and propadienol do match the bonding pattern required for tautomerism, but don't pass the second criterion of being "readily interconvertible".

The reason is fairly simple. The process of tautomerisation involves protonating the oxygen, and deprotonating an α C–H (which way round this happens doesn't matter). To deprotonate a proton that is α to C=O, the C–H bond must be oriented parallel to the C=O π system, because the new C=C π bond is going to be made from that C=O π bond and the C-H σ bond. This cannot be the case in acrolein, because of the extended conjugation between the C=C and C=O bonds. Indeed, the α C–H bond in acrolein is perpendicular to the C=O π system.

One of the requirements of tautomerism is that the carbon skeleton of the molecule remains unchanged. Only the proton must change it's location with reference to the molecule. Acrolein and propadienol have very different molecular geometries and hence are not tautomers of each other. Here's a comparision of their structures. The first one is acrolein and second one is propadienol. 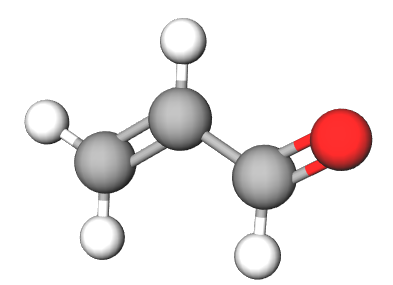 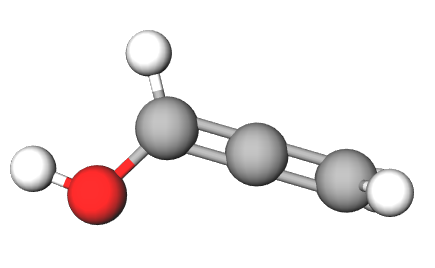 16
Which is the more stable enol form?
6
Can a tertiary enamine tautomerize to an imine?
3
Sulfurous acid tautomerisation
8
Why is the thione tautomeric form of 2-Mercaptopyridine favoured?
7
Ring chain tautomerization of hydroxyacetone
3
Compound having the highest enol content will be?
0
Tautomerism in alkenes
5
On the stabler tautomer in amide-imidic acid tautomerism