Which is the more stable enol form?

If I understand correctly, when we go from a keto to an enol form, we simply abstract an alpha proton and thereby create a double bond to a carbon-bearing the hydroxyl functional group.

When evaluating the stabilities of the two enol forms, it appears that the enol derivative of 2,4-pentadione is more stable because of intramolecular hydrogen bonding. Both have long-range conjugation, so that cannot be a factor. The only difference really is the hydrogen bonding ... and of course ring strain (a 5-membered ring with two double bonds can't be very stable). 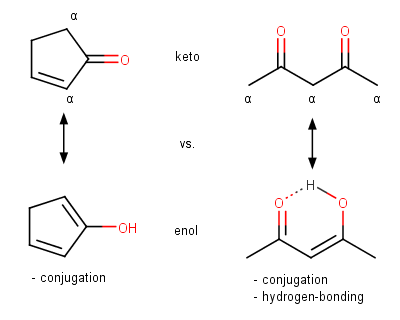 The bonding differences between the keto and enol structures shown above are:

This rough calculation tells us that, generally, the keto form will predominate. However, the energy difference between the two forms is only 66 kJ/mol, a relatively small number; so it is likely that small differences can cause a dramatic shift in the relative concentrations of the two species.

Some general guidelines for predicting shifts in keto-enol equilibria 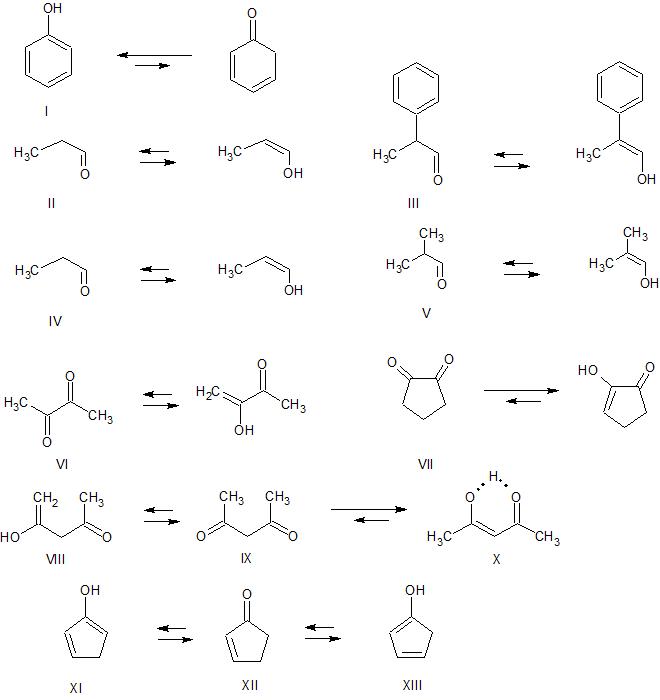 Aromaticity and conjugation - The keto-enol equilibrium for phenol (I) lies entirely on the enol side due to thermodynamic stabilization provided by aromaticity. Compound III would be expected to have a higher enol content than compound II due to the extended conjugation present in the enol of III

Substitution - Replacing hydrogen with alkyl groups on a double bond stabilizes the double bond. Therefore, we would expect compound V to have a higher enol content than compound IV

Dipolar repulsion - The carbonyl dipoles in butane-2,3-dione (VI) can reduce their electrostatic repulsion by adopting the geometry pictured with the carbonyl groups oriented away from one another. Due to the constraints of the 5-membered ring, cyclopentane-1,2-dione (VII) cannot adopt a similar geometry. In this case, the dipolar repulsion is lessened by increasing the enol content in the equilibrium to a point where the enol predominates.

Answer to your question

Cyclopent-2-enone can form two different enols, XI and XIII. Neither enol has any features that would be expected to provide significant enol stabilization. There is no more conjugation than what is found in the ketone, there is no special hydrogen bonding, and no substitution of the carbon-carbon double bonds. Indeed, the proton nmr of cyclopentenone is just as expected, no evidence for a significant amount of enol. On the other hand, 2,4-pentanedione exists primarily as the enol form, at least in non-polar solvents, for the 3 reasons (conjugation, hydrogen bond, double bond substitution) discussed above.

The 2,4-pentanedione enol form shown is the more stable enol, since the lone pair on the enol oxygen can delocalize across the five atoms to the electronegative carbonyl oxygen. Hydrogen bonding is also a minor factor in its favor. The enol form of cyclopent-2,3-en-1-one is indeed (also) a conjugated system, but the lone pair on the enol oxygen cannot delocalize to an electronegative atom, rather only to a carbon atom, and the delocalization occurs only over three atoms instead of five. In thinking about this problem, it may help to draw out and look at the various "resonance structures" of these enols, but from a molecular orbital standpoint, the governing principle is that a more delocalized orbital is lower in energy (when it contains electrons, that is).

The effect is more pronounced in comparing the enolate anions of the two species.

0
Why enol is unstable?
16
Which factors determine the keto:enol ratio for aldehydes, ketones, and 1,3-dicarbonyl compounds?
15
Why is enol content higher in non-polar solvents?
6
Dieckmann condensation's final protonation step
4
Can vinyl alcohol react as a dienophile in Diels-Alder reactions?
2
Why 3-chloroprop-1-en-1-ol is unstable?
3
Enol percentage comparison between 1,3 diketones and 1,2 cyclopentadione
3
Compound having the highest enol content will be?
0
Which of the following compounds possess more than one percent enol content?
0
Which enol form is more stable?
See more linked questions

0
Major form of methyl 3-hydroxy pent-2-enoate?
7
Stability of furanose vs. pyranose form of glucose?
16
Which factors determine the keto:enol ratio for aldehydes, ketones, and 1,3-dicarbonyl compounds?
8
Which tautomer of hexane-2,4-dione is more stable?
3
Enol or Keto form?
4
At what temperature does tautomerization stop?
9
Which of these carbocations are more stable?