I have several mixtures of ethanol and water, ranging from about 85% ethanol to nearly 100% ethanol, and I plan to basify these solutions. Using the method defined by ASTM D6423, one of these solutions was measured to have a pHe of 5.2 due to the presence of some acidic species, but I don't expect these species to act as buffers.

Now, I'm aiming to get these solutions to a pHe of approximately 10, and in practice I'm just going to add the base and check the pHe as I go. However, motivated by the fact that I'll potentially need to do this on quite a large scale at some point, I'm curious if it's possible to put a mathematical backing behind this.

If this were a pure ethanol solvent, I would do something similar using the self ionization constant for ethanol, except nobody has published one as far as I can tell. This answer also failed to find one. The Wikipedia page on the leveling effect depicts ethanol having a wider acid-base discrimination window than water, so I would expect $K_{EtOH}$ to be somewhat higher than $K_W$, but no numbers are given. I checked the source of the graphic as well, and they also give no numbers.

Finding $K_\ce{EtOH}$ wouldn't even fully solve the problem though, as there is a non-negligible amount of water in the solvent. The only source I was able to find discussing pH in mixed-solvent system was this one, which discusses using a correction factor ($\delta$) to allow the measurement of something analogous to pH in mixed solvent systems using an electrode calibrated in an aqueous standard. However they only determined this correction factor in solutions of up to about 72% ethanol, and the relationship is decidedly non-linear, as shown by this plot: 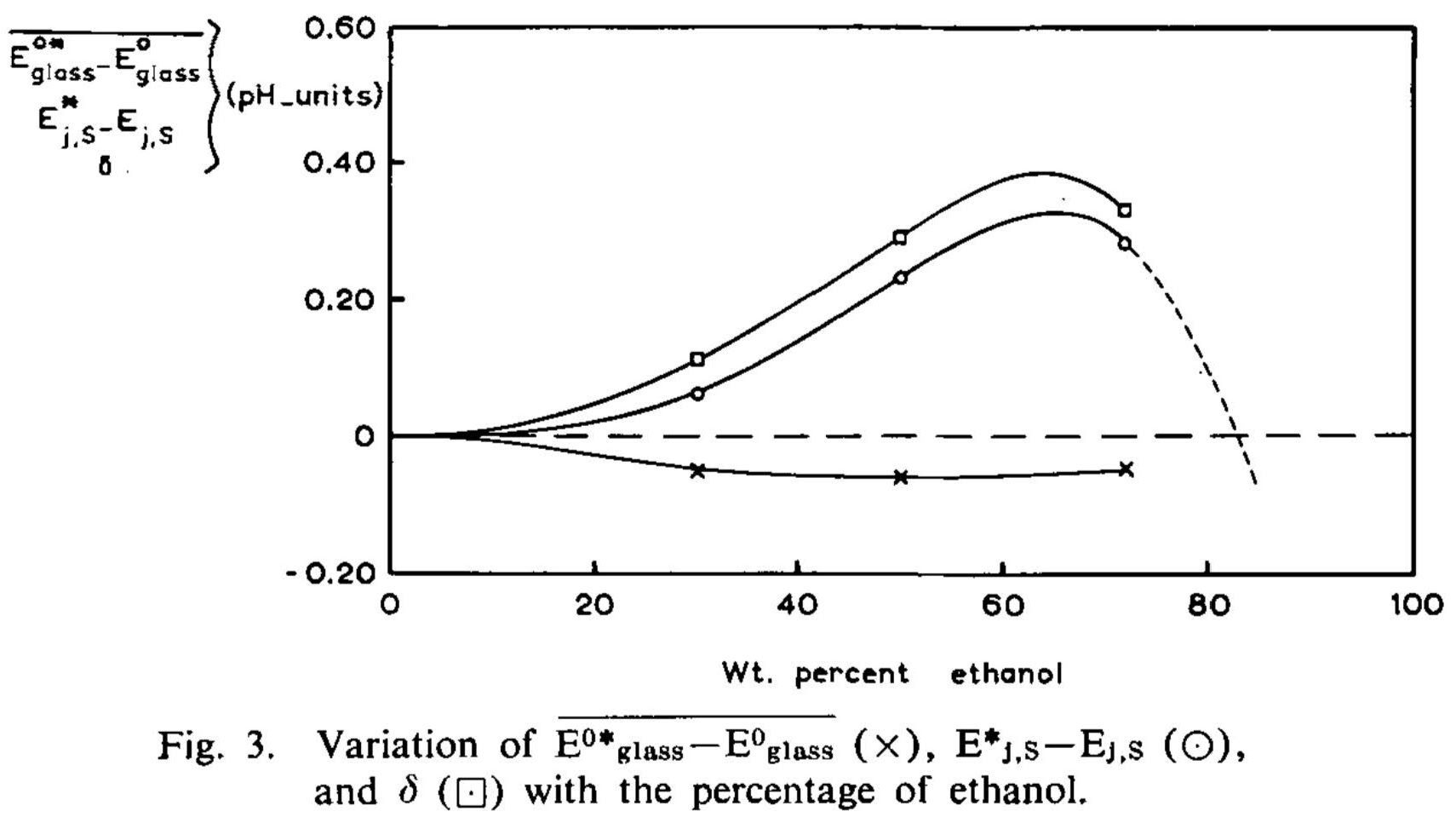 We know that when our probe reads 10 we'll get good results with the rest of the process, so presumably this means in the math I would want to target a pH of $10+\delta$, were $\delta$ known.

This is as far as I've been able to get with my own literature search. If anyone here has any insight into this problem I would greatly appreciate it!

EDIT: Additional detail. I just had some 200 proof ethanol measured by the ASTM D6423 method, and the pHe was measured as 6.5. This is counter to what I expected. I expected it to have a pHe greater than 7 since pure ethanol should be a somewhat weaker acid than water based on everything I've read. I'm not certain if this is helpful information at all, but it's another data point.

I think you have summarized the main issue yourself. The reading of a pH probe in a basic alcoholic solution is just a positive real number. It has no significance whatsoever. The value of 10 means nothing. The pH probe has no idea that it is being dipped in an aqueous organic solution. I am sure the probe will take a very long time to equilibrate to give a stable "real number" output. Since those numbers such as pHe =10 have no theoretical basis it is hard to calculate anything. This is confirmed by a quick look at the standard method.

The ASTM D6423 method says " Readings are taken at exactly 30 s because the meter reading will change throughout the analysis due to glass-electrode voltage drift caused by dehydration of the glass-electrode membrane. Because alcohol dehydrates the glass-electrode membrane, time spent soaking in alcohol solution should be minimized. 4.3 The electrode is soaked in water-based pH 7 buffer between readings to prepare it for the next sample. This rehydrates the glass electrode, a necessary step to preserve the electrode's response characteristics. 4.4 The electrodes are cleaned/rehydrated at least every ten samples by alternately soaking several times in 1 mol/L NaOH solution and 1 mol/L H2SO4 (or 1 mol/L HCl) for about 30 s each. New electrodes are treated by this procedure before first use."

The practical way to "calculate" perhaps is to do a acid base titration. Calculate the titer for each batch with a suitable indicator and add the amount of base accordingly.

Calculations of pH might not take all the factors into consideration, and the high and variable ethanol content is an unusual restriction.

If the unknown acidic species is a contaminant or simply unwanted, and you desire a reproducible constant reference pH, you might consider treating your ethanol solutions with magnesium hydroxide. In water, it will give about pH 9.5. It should absorb/adsorb the acid. If the acid salt becomes an undesired solute, the ethanol solutions could be filtered thru a column of Mg(OH)2; this would more likely adsorb and remove the magnesium salt.

MgO is less reactive than Mg(OH)2. MgO comes in 2 forms, light burned and dead burnt, and either of these might be better because of particle size (settle faster) or column operation (faster thruput).

Not the answer you're looking for? Browse other questions tagged analytical-chemistry ph solvents or ask your own question.

2
What is the difference between IPA and Ethanol in terms of solubility?
6
Is there a potentiometric method for monitoring salt formation in organic solvent?
5
Dissolving Tylenol Science Experiment - why is it fastest in distilled water?
5
Folin–Ciocalteu formula
1
How to calculate he equilibrium constant change for acid-base reactions in a different solvent?