Why is H2O2 named hydrogen peroxide?

Why is $\ce{H2O2}$ named hydrogen peroxide and not dihydrate dioxide?

Oxide is a term reserved for the oxide anion $\ce{O^2-}$. This anion is typically characterised as rather stable since the very electronegative element oxygen is in its maximum negative oxidation state. Dioxide means, that there are two oxides present in whichever structure we are looking at.[1] A typical example for a dioxide would be manganese dioxide, also called manganese(IV) oxide $\ce{MnO2}$. As shown in the image below, it crystallises in the rutile structure, like titanium dioxide $\ce{TiO2}$. 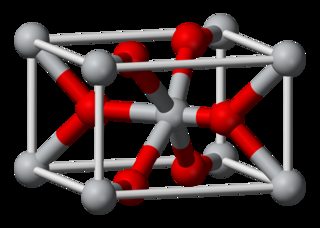 Figure 1: Crystal structure of rutile, $\ce{TiO2}$ which is equivalent to β-$\ce{MnO2}$. Red spheres represent oxides, grey ones the metal in question. Image taken from Wikipedia, where a full list of authors is available.

Hydrogen peroxide, on the other hand, as is evident from the structure in figure 2 below, contains not two $\ce{O^2-}$ units but a single $\ce{O2^2-}$ unit, composed of two oxygens bound to each other. This means that oxygen’s oxidation state is $\mathrm{-I}$ rather than $\mathrm{-II}$ and that hydrogen peroxide is readily reduced. (It can also easily be oxidised back into $\ce{O2}$. The functional group $\ce{O-O}$ is labelled peroxide and it would not make sense calling it dioxide since it does not feature oxides. 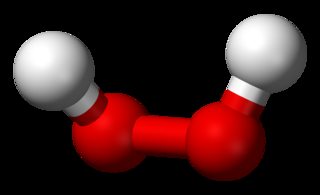 Figure 2: Structure of hydrogen peroxide. Red spheres are oxygen, white ones hydrogen. Image taken from Wikipedia, where a full list of authors is available.

Aside from that, IUPAC also allows for nomenclature to entirely ignore the molecular structure and name entirely by molecular composition. In that compositional nomenclature, dihydrogen dioxide is an acceptable name like dihydrogen monooxide would be for water. Note, however, that this only tells us the number and type of atoms involved while not giving us any clue to how they are connected. It is thus typically better to refer to a peroxide as a peroxide to emphasise the actual functional group present.

Calling it a dihydrogen dioxide (hydrate is water, not hydrogen) would not only be long but also not show the type of reactivity the substance has.

So it's just more convenient to call it hydrogen peroxide, rather than dihydrogen dioxide.

17
Does water have a chemical name?
6
Why H2S2 is hydrogen disulfide and not hydrogen persulfide?
-7
Is Hydrogen Dioxide Water? If so, what is the chemical compound and differences between H2O and H2O2?

15
Why is this compound named resorcinol?
6
Why H2S2 is hydrogen disulfide and not hydrogen persulfide?
0
Why is 1-bromo-3-methylbut-2-ene named like that and not as 2-(bromomethyl)but-2-ene?
1
Why is diazobenzene named so and not phenyl diazobenzene?
3
Why acyl halides are not named as 1-substituted aldehydes?