What is the difference between nuclear fission and nuclear fusion?

Fusion is an increase in the number of protons in the nucleus by fusing two nuclei. You know fusing means joining together, right? So that can help you remember which is which. "Confusion" comes from the same root word, and happens when you mix things up together in your mind - the "fusion" in "confusion" is the bringing things together.

Fission is a decrease in the number of protons by splitting the nucleus: "fission" means a split.

Ron's given you the classic examples for fission and for fusion.

Either process can absorb energy, or release it.

Iron is the key element here.

Whereas, for elements with a higher proton count (i.e. a higher atomic number) than iron, fusion absorbs energy, and fission releases energy.

(it's not quite that simple, otherwise we might find a way to fuse two lighter-than-iron nuclei to release energy and create a heavier-than-iron nucleus which we then split again back to the two original nuclei and release even more energy. That's impossible)

Nuclear fission involves the splitting of a heavy nucleus into two lighter fragments plus the release of energy. As an example here is one route by which $\ce{^235U}$, a fissile material, can split apart.

Note the 3 neutrons generated in the fission process, they are part of the chain reaction; they allow the reaction to propagate at an even faster rate as they go on to react with 3 other $\ce{^{235}_{92}U}$ nuclei.

Nuclear fusion involves the fusing together of nuclei to form a heavier element. Again, energy is released in the process. Here is an example of a fusion reaction involving the combination of 2 deuterium nuclei.

Some time ago I made this rudimentary infographics to help the students remember which is splitting and which is merging, maybe it can also assist you: 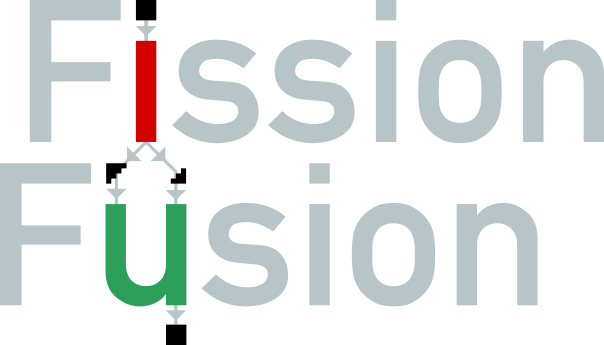 Nuclear fusion is where nuclei of atoms fuse, or come together, to make larger atoms and releases energy. Nuclear fission is when atoms split apart, releasing energy, neutrons, and smaller atoms.

Fusion: In the core of the Sun, hydrogen nuclei smash into each other to make deuterium and helium. Fission: In the reactor core of a nuclear power plant, neutrons hit uranium atoms to make them split and release energy.

6
Nuclear fusion reactions violate law of conservation of mass, but it has not yet been taken into account. Why?
1
Where do the electrons that are released in the sun go?
5
How to derive the nuclear spin of 23Na?
2
Nuclear power: what material is the control rod made from?
6
What chemical elements does a nuclear explosion release into its mushroom cloud?