Grignard reagent will act as a base or a nucleophile [duplicate]

R- from grignard reagent (RMgBr) and gilmann's reagent (R2CuLi) although being a strong base reduces the carbonyl group and does not act as a base.

Why can't it abstract the alpha hydrogen forming an enolate ion?

As most of us chemists have understood and experienced, the Grignard reagent have undergone the many reactions with suitable substrates. Yet, the most familiar and probably the most used reaction is the addition to a carbonyl group to give $2^\circ$- or $3^\circ$-alcohol. The Grignard reagents' affinity for a corbonyl group in the presence of an acidic $\alpha$-$\ce{H}$ has been documented here. However, if at least $\ce{OH}$ group is present in the molecule, acid base reaction would be take over. For example, the usual Grignard reaction would not happen if your glassware is wet or not properly dried.

Albeit they were rarely published, it is well known fact that some side reactions with available acidic $\alpha$-$\ce{H}$ and some reduction reactions have been taken place during original Grignard reactions. These side reactions are frequently complicated the intended reactions, which may replace some or all of the intended addition reaction, reducing expected percent yield (Ref.1). Most importantly, the conversion of an alkyl halide to a deuterium labelled hydrocarbon has been achieved via Grignard reagent preparation (Figure A): 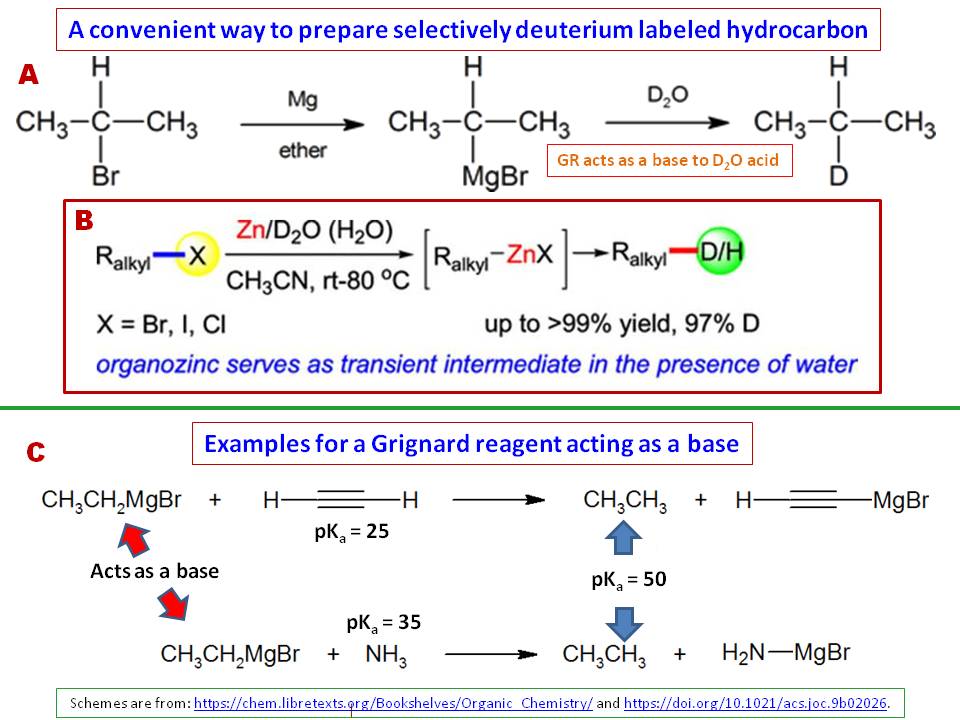 Some times during Grignard preparation, you might experience no Grignard was evidently formed because you have loosen your alkyl halide reagent while substrate ketone was recovered unchanged. That is because, if your ketone is bulky like diisopropyl ketone (2,4-dimethylpent-3-one), following reaction may happen (look under an example for Grignard acting as a base): 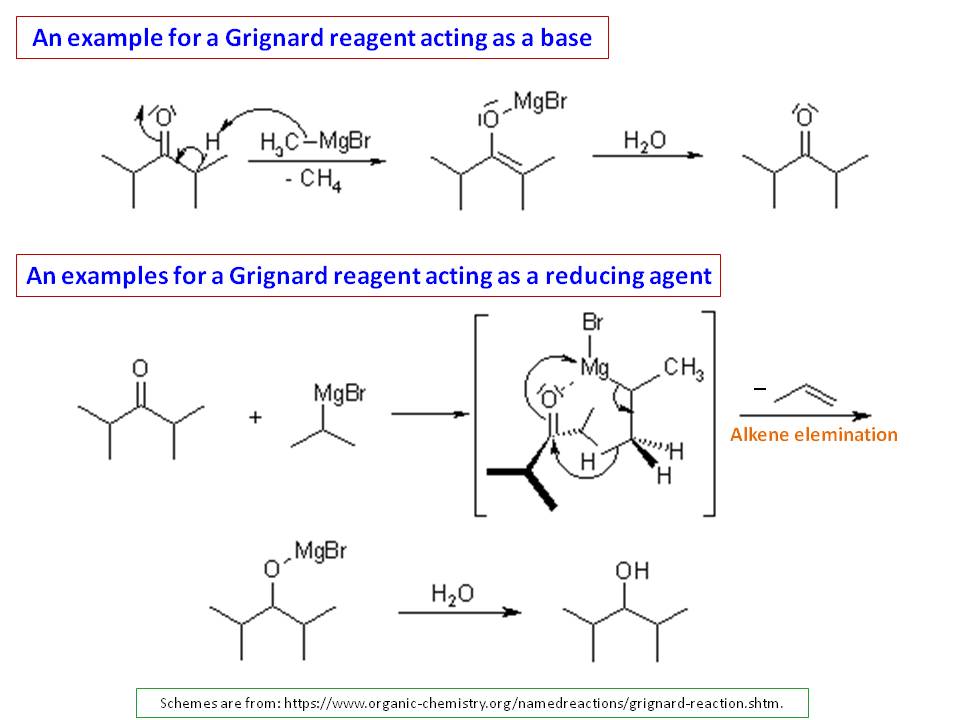 If your Grignard reagent have an active $\alpha$-$\ce{H}$ to give, it can also acts as an reducing agent as in above case of Grignard acting as a reducing agent. This is the case of reaction between benzophenone and specific Grignard reagent (isobutyl magnesium bromde or 3-methylbutylmagnesium bromide) illustrated in Ref.1. The main products from that reaction were dibenzylcarbinol and isobutene.

Not the answer you're looking for? Browse other questions tagged organic-chemistry carbonyl-compounds nucleophilic-substitution grignard-reagent enolate-chemistry or ask your own question.