Can one exclude calibration points using a combination of permutation testing and a non-parametric test statistic?

From visual inspection of data files, it appears that for some compounds there are samples that were spiked at > 0 ng/L that are indistinguishable from blank samples (i.e. those at 0 ng/L). I’d like to test my suspicions statistically and, if significant at a reasonable threshold, would exclude these samples prior to performing the least squares regression.

Here, the sampling distribution would be generated by repeatedly randomising class labels (i.e. concentration labels for 0 ng/L and the calibrant level being tested) and calculating the test statistic. The p-value would be derived as the proportion of the permuted test statistics that were equal-to or greater-than the actual measured statistic, i.e. as calculated before randomising labels. If the p-value turns out to be greater than some pre-determined threshold (probably going to be 0.05 or 0.01), I accept the null hypothesis. Given that I would repeat this test for each concentration level, I’d also plan to apply a Benjamini-Hochberg correction to the final list of p-values and reject then exclude concentration levels with adjusted p-values above the cutoff (I’d aim for either 0.05 or 0.01 – yet to decide).

So, feedback on the following would be great:

You have a very wide range (1-1000) for the independent variable. Using a simple linear least squares analysis isn't appropriate.

I grabbed the image below from webpage https://www.mathworks.com/matlabcentral/answers/392636-confidence-band-around-linear-least-squares-line 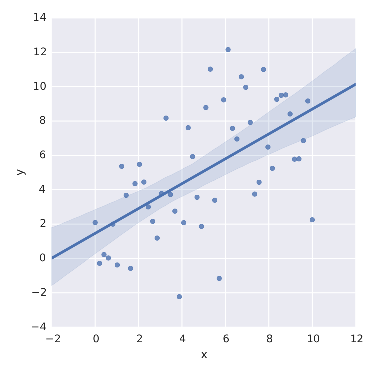 The point I want to make is shown by the shaded area. Assuming homoscedasticity, you wouldn't weight the errors. Thus the confidence interval for the line is narrowest at the center of the fitted range and gets much wider at either end of the range. So your low samples ( 1, 2, 5, and 10) will essentially be irrelevant.

So you need to assume hetroscedasticity and weight the sample errors somehow.

1. Does the proposed test statistic seem reasonable as a non-parametric replacement to the t-statistic?

2. Is it appropriate to exclude samples from the regression, for which the p-value for the test statistic exceeds the defined threshold?

Hope this helps a little. I just don't know enough about S/N for LC/MS or the detector system that you're using to tell you what you should do.

Your statement "Given that, for many compounds, the data are often non-‘normal’ around the lower-end of the calibration curve in such dataset,..." is disconcerting.

Before running a nonparametric analysis, try viewing the problem from a parametric vantage of Generalized Least-Squares. To quote a source:

So, one of the important aspects of your data is that you have repeated observations, likely with correlated error structure.

2
The Principle of Internal Standardization (in the context of ion chromatography)
2
What type of test can I do to show that water is one of the products in a neutralisation reaction?
2
Internal Standard Methodology
5
Testing for asbestos using readily available chemicals and tools?
2
How can one determine an atomic mass with high accuracy using gravimetric analysis?
3
Can 2‐chloropropane and acetyl chloride give the iodoform test?
3
What is the purpose of subtracting the blank when constructing an analytical calibration curve?
2
% coefficient of variation (%CV) for log-linear and log-log regression (calibrations)
5
Detection limit for log-log calibration curves