This tag is for questions about amino acids, both natural and non-natural ones. It should only be applied to questions about the monomers. For peptides and proteins, use the proteins tag instead.

Amino acids are compounds containing both an amino and a carboxy group. Typically when using the name one refers to the 22 natural and proteinogenic α -amino acids found in every living species on Earth.

These 20 amino acids are the only monomers that make up most proteins synthesised by living beings. Proteins are the most diverse class of biomacromolecules performing cellular and extracellular tasks as different as giving stability, catalysing reactions, regulating processes and communicating with neighbouring cells or other organisms.

Proteinogenic amino acids are typically L-configured. Exceptions exist in bacteria which are also known to synthesise and use D-amino acids. For most amino acids, the L-configuration corresponds to the (S) configuration. L-Cysteine is (R)-cysteine, though, due to sulfur’s higher CIP-priority.

Except for proline which is secondary, all proteinogenic amino acids are primary amines.

In neutral aquaeous solution, amino acids form zwitterionic structures as shown in the image below for alanine. This is due to the $\mathrm{p}K_\mathrm{a}$ value of the carboxylic functional group typically being around $3$ to $5$ — deprotonated at neutral pH — and the amino group’s $\mathrm{p}K_\mathrm{a}$ typically being larger than $8$ — thus protonated. The zwitterionic structure improves solubility in water due to the charge separation. 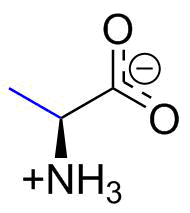 Figure 1: Zwitterionic structure of alanine in neutral aquaeous solution. The image was taken from Wikipedia, where a full list of authors is available.

Another consequence of two Brønsted acidic functional groups is the ability of amino acids to act as buffers in aquaeous solution. The buffer point of alanine is at $\mathrm{pH}\ 6.02$, for reference.

Linkage to form peptides and proteins

Even though some amino acids may contain additional carboxylic groups (aspartate and glutamate) or an additional amino group (lysine), peptides and proteins are always formed by an amide linkage between a carboxyl and the next amino acid’s α amino group.

These linkages are able to accept and donate hydrogen bonds forming secondary structures which are explained in the proteins tag wiki.

DNA encodes the information to construct proteins in form of a triplet code: Three DNA bases always encode one amino acid. A full list of these codons can be found on Wikipedia.

Those amino acids that are not encoded by the genetic code but may still appear in proteins are termed non-proteinogenic. Typically if these are found in proteins, these are generated by post-translational modification. One of the most common modifications is the hydroxylation of lysine to give hydroxylysine — a very important amino acid in collagen structures.

Other amino acids may be of natural origin but not found in proteins at all. Typically, these amino acids will not be α amino acids. One of the most well-known is &#3b3; -aminobutyric acid (GABA), a mammalian neurotransmitter.

Forming part of the chiral pool, being ubiquitous and thus easily isolated and cheap, amino acids are often used as chiral catalysts in chemical synthesis. Proline is often used due to its five-membered ring which further locks the conformation. Examples of reactions catalysed with proline derivatives are the Corey-Bakshi-Shibata reduction and MacMillan aldol reactions. Other amino acids, most notably phenylalanine and valine, form the basis for Evans auxilliaries.

Where did amino acids get their one-letter codes?

How do I calculate the isoelectric point of amino acids, each of which has more than two values of pKa?

Where did amino acids get their one-letter codes?