In the given compound, arrange the numbered groups according to CIP rules: 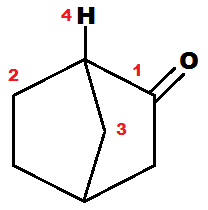 Group $1$ will have highest priority because Oxygen atom is attached to $1$. (It can be considered as two oxygen atoms).

Group $4$ will have least priority due to least atomic number among the numbered groups.

But I am confused about order of priority of group $2$ and $3$. Both have same atoms. (So I will check the next atom which is also same.)