Why is a double bond given priority over substituents during IUPAC nomenclature? 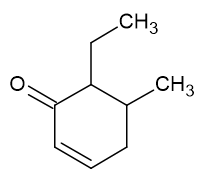 My book names this compound as 6-ethyl-5-methylcyclohex-2-en-1-one.

I have learnt that after numbering the principal functional group which is ketone in this case, we have to treat all other groups as substituents and therefore I think the name should be 2-ethyl-3-methylcyclohex-5-en-1-one.

Why should the double bond be given priority?

organic-chemistry nomenclature
Share
Improve this question
edited May 25, 2021 at 13:43

The most important simplified criteria for the numbering in such cases are:

You have correctly identified the principal characteristic group and assigned the lowest locant to the ketone in accordance with Rule (c).

Next, a low locant is assgined to the double bond according to Rule (e). Therefore, the name of the structure without further substituents is cyclohex-2-en-1-one rather than cyclohex-5-en-1-one since the locant 2 for the double bond is lower than 5.

Thus, the correct name is 6-ethyl-5-methylcyclohex-2-en-1-one.