Why does 2,4 DNP give orange colour crystals?

This is just a question from a curious student after 2 hours of lab work.

Generally, you will notice that compounds containing chromophore and auxochrome groups have a colour. Chromophore groups are groups that are responsible for colour of the molecule once they are “attached” to it: benzene is colourless, but nitrobenzene is pale yellow. Apart from a chromophore group there are groups called auxochrome groups which alter this colour and so the intensity of absorption ( example: nitrobenzene is pale yellow, but p-nitroaniline is a bright yellow to red, the auxochrome enhanced the colour ). Among the chromophore structures, there are groups such as nitro, azo, nitrile, thioketone, conjugated double bonds ( like in retinal, carotene ). Some auxochrome structures are: the aldehyde group, the methyl mercaptan group, hidroxyl group, amine group. To sum it up, functional groups such as these will account for the colour. Now, onto analysing DNP. This compound has 2 nitro groups and a hydrazo group ( 2,4-dinitrophenylhydrazine ). From the start, we have a colour: red ( if it is pure ). When it reacts with an aldehyde or a ketone in a condensation reaction, a double bond forms between the carbon on which oxygen was attached and the unsubstituted nitrogen of DNP. The formation of this double bond will alter the colour, shifting it to an orange. It also depends on the carbonylic compound you use. If the carbonylic compound contained conjugated double bonds ( like propenaldehyde ), the condensation product will contain conjugated double bonds which are chromophoric ( so in this case I can only guess what the resulting colour would be because we have more chromophoric groups ). So, DNP is red in its purest form. Its colour is the result of the existing functional groups. A reaction with an aldehyde or ketones will shift its colour to orange.

Hydrazines react with ketones and aldehydes to make hydrazones. For example, see Chapter 11 of Organic Chemistry by Clayden, Greaves, and Warren.

For the case of the product from 2,4-dinitrophenyl hydrazine, the resulting hydrazones have an extended network of conjugated π bonds. That makes them good chromophores for absorption in the blue to blue-green range of visible light, which is why they appear orange to red-orange. Extending the conjugated π system (e.g. substituted aromatic aldehydes) leads to longer wavelength absorption, making the crystals appear redder.

Nitro aromatics are often crystalline. Hydrazones resulting from 2,4-dinitrophenylhydrazine turn out to be highly crystalline. This is the basis for the classical qualitative analysis method for identifying unknown ketones and aldehydes by the melting point of their 2,4-DNP hydrazone derivatives.

Colour in Organic compound arises due to absorption of energy of excitation when visible light falls upon them. The colour which is visible to us is the complementary colour of the colour absorbed by the compound.
Now, due to presence of high conjugation in any molecule, its energy of excitation comes down. As extent of conjugation increases, the difference in Energy between excitation energy levels decreases and molecule thus absorbs light of higher wavelength (lower energy) for getting excited.
Observe the two compounds, (without the Nitro group ) i.e $2,4$ DNP and itscondensation product with a carbonyl compound. 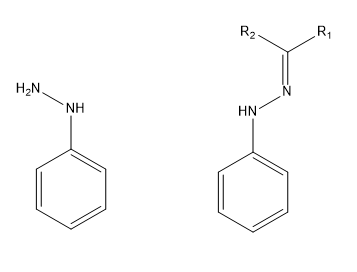 Conjugation in the right molecule is more than the left one due the extra conjugation of the lone pair on Benzylic $N$ atom with the double bond. Nitro group does nothing but increases the extent of delocalisation in same amount in both the compounds.
If you have observed before doing the experiment, $2,4$ DNP is a yellow coloured compound. So, it must absorb at the violet colour region of the visible light. So, the right one should absorb at a lower wavelength. In fact, that is the case we are also observing. The right one absorbs in the blue region of the visible region, and we are observing its complementary colour i.e. Orange.

3
Why are enantiomeric excess % and specific rotation considered?
10
What is the chemical test for identification of benzophenone?
4
Dinitrophenyl (DNP) derivatives of amino acids (specifically epsilon-DNP-lysine)
1
Solubility of succinic acid in water vs ethyl acetate?
11
Ambigious nature of aldehydic group in glucose
1
Lucas test in the presence of EWG like -CN