If all intermolecular forces are electrostatic in nature, why don’t large non polar molecule dissolve in water?

If I have a large non-polar substance A that forms strong dipole-induced dipole force (DIDF) with water, with strength comparable to that of H-bonds between water molecules, will A dissolve in water?

Dipoles can be induced, but they are not permanent. You’re basically asking why a spring doesn’t like to stay compressed when you push on it—it's because that’s not its most stable position. The electron density around hydrogen in a $\ce{C-H}$ bond is much higher than the hydrogen in a polar $\ce{O-H}$ bond, so electrostatic repulsions overwhelm any attractions that may be induced. See the diagram below$[1]$: 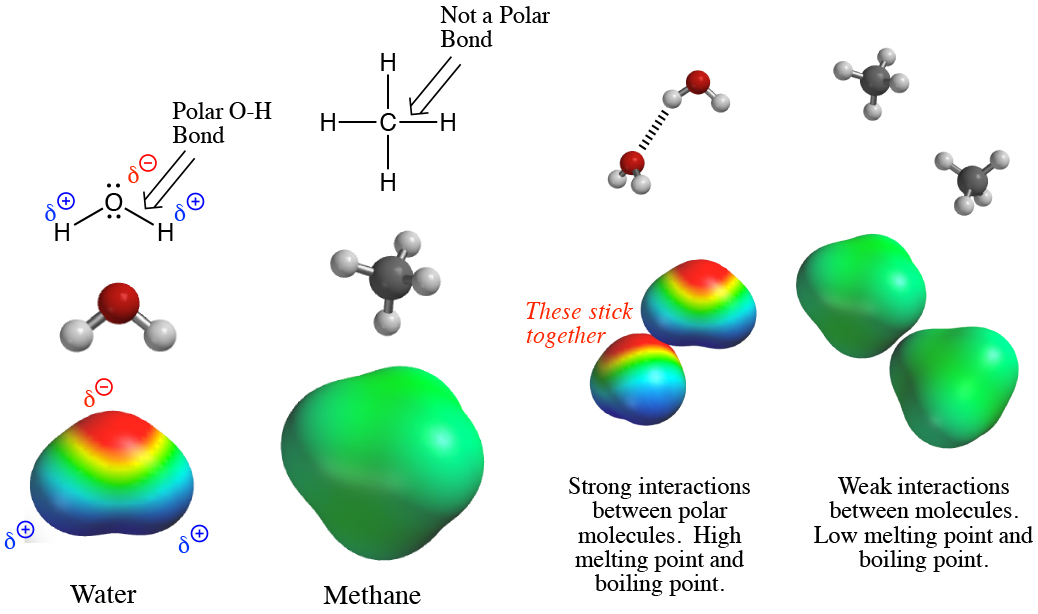 Yes, intermolecular forces are all caused by electromagnetic fields (your title says "electrostatic" but this is slightly wrong as some forces are also caused by interactions you might call magnetic. But the underlying forcefield is the same either way.)

But just because the forces are electrostatic doesn't mean they will be strong. Some interactions involve oppositely charged ions interacting and they are usually strong (this is easily visible in bulk electrostatic experiments like charged balloons sticking to a wall). Next in strength are the interactions where molecules are not charged but have strong dipoles because of (to simplify a little) some degree of charge separation internal to the molecule (these are caused because some elements hog their electrons much more strongly than others). Some of these are so strong and unusual we give them special names: hydrogen bonding (basically a strong and directional dipolar effect with some extra pixie dust because hydrogen is such a light nucleus). Essentially every molecule that is not symmetric will have some dipole, though many will be very weak (asymmetric hydrocarbons have very small dipoles but chlorocarbons have relatively strong ones). But non-polar things (even atoms of noble gases) eventually stick together enough to liquefy. The dominant forces here are van Der Waals forces. These are still electromagnetic attraction based on dipoles but the dipoles are caused by quantum fluctuations in the electron density in the atoms or molecule's bonds. These forces are fairly weak compared to ionic or dipolar interactions.

It is also worth remembering that everything has van der Waals forces but in polar molecules they are just a lot weaker than the dipolar interactions.

So, although the underlying cause of attraction is always something to do with electromagnetic forces, sometimes those forces are very weak. Crudely, they may be too weak to make something soluble.

But solubility is a little more complicated than that. It isn't just about the nature of the force it is also about the detailed mechanism of solubility. For something to dissolve in water you don't just need a strong attraction between the molecule and water, the interaction has to be strong enough to compensate for the inherent attraction of water molecules to each other (which is pretty strong). van der Waals interactions are usually too weak by themselves (even when induced by a strongly dipolar water molecule) to create a strong enough attraction. And, when you take the loss of water-water hydrogen bonds into account if you stick a large non-polar thing into the middle of a bunch of water molecules, the whole equation looks even less favourable for solvation.

If you had something where the induced attraction was as strong as water-water hydrogen bonds, it might well be soluble in water. But that hypothetical compound is extremely unlikely to exist because of the relative strengths of the induced versus the inherent dipolar interactions (which is even worse when you take account of the large number of hydrogen bonds you have to break to fit a large molecule into solution).

Answer edited; In a polar solvent non-polar molecule will have dipole - induced dipole energy as well as some induced-dipole, induced-dipole energy which is smaller. The enthalpy of dissolving a non-dipole molecule in water, such as cyclohexane, is small, some types of molecules have have a small negative or some a small positive value, so the fact that these type of molecules do not dissolve to any great extent is due to entropic effects because $\Delta G = \Delta H-T\Delta S$ depends on entropy change when $\Delta H $ is small.

Mixing is always entropically favourable ($\Delta S$ positive) so something else must be causing the entropy to become negative. This is due to the fact that water has hydrogen bonds and these are used to bridge any 'intruder' molecule. This limits their geometry and hence make entropy negative and so $-T\Delta S$ positive and free energy positive.

Not the answer you're looking for? Browse other questions tagged organic-chemistry solubility intermolecular-forces or ask your own question.