Does ICP-OES detect molecules in suspension?

I'm curious whether ICP-OES has the ability to detect molecules in suspension?

It will depend on the size of the particles which are in suspension. If the particles are very large compared with the capillary feeding the solution into the spray chamber then the capillary will block up and you will detect nothing and end up very unhappy with a broken machine.

If the particles are much smaller than the capillary then they will be able to enter the spray chamber and then be present in the small droplets which enter the plasma torch. As a result it will be possible to observe the particles by means of the ICPOES machine.

The inclusion of solid particles in the liquid fed into the ICPOES will give as the droplets boil to dryness additional solids particles. These solid particles may modify the behaviour of the other elements in the torch. I suspect that it may be similar in some ways to the processes which occur in the fireball as it cools after a low altitude nuclear detonation where things can adsorb onto existing particles. If you look in the literature at studies of fallout particles, the particles from the nevada tests have radioactivity deposited on minerals which are similar to those found at the test site.

I have found that if you increase the salt content of what you are feeding into either a ICPOES or ICPMS that the intensity recorded for a given concentration of an element (not found in the added salt) will decrease. This is a possible sign that some of the element is being lost onto the particles formed by the dehydration of the salt solution.

It is best if the ICPOES machine is only ever fed with samples which have been filtered through a very fine filter. I tend to use a syringe filter with holes which are about 0.5 micrometers. This helps to keep the fine particles away from the machine.

I concur with Nuclear Chemist. You absolutely can see elements present in solids with ICP-OES: I've done it myself, in particular with suspended niobium and tantalum oxides.

If I aspirate a dilute suspension of tantalum oxide particles, I see a clear, albeit somewhat weak, peak at the $263.558\,\mathrm{nm}$ line for Ta: 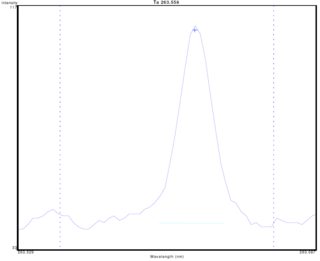 If I centrifuge the suspension and analyze the supernatant, though, the signal is appreciably reduced: 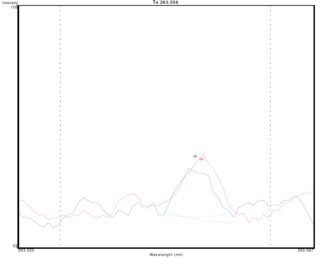 I was only looking to test qualitatively for tantalum in these samples, so the above results were sufficiently conclusive. Had I wanted to quantitate, it would have been quite challenging...ensuring a consistent method for (a) delivering the particulates into the plasma and (b) referencing against some sort of calibration curve would likely have been extremely challenging.

Not the answer you're looking for? Browse other questions tagged analytical-chemistry elemental-analysis or ask your own question.

2
How are samples prepared for analysis with ICP-OES? Can it analyse gases?
1
What analytical methods are used to quantify C, O, N, and H in a sample?
4
(How) Does ICP-OES determine the quantity of detected elements, or just their occurance in the sample?
0
ICP-OES data treatment: correct for dilution and inweight, the units
2
Determine the quantitative composition of a solid sample containing Co, Mn, Al, C, and O
5
Problem digesting sample for Ti analysis using ICP-OES
1
Taking a procedure for ICP and adapting it to use with AAS
6
Determining stoichiometry in ICP-OES data analysis
2
Determining ppm concentrations from food label information for ICP-OES analysis?