How to name this hydrocarbon [closed]

I saw a hydrocarbon bond line diagram. That have a methyl on top and a complex group down. I don't know from where to start numbering.Ihave posted the image.Can any body help me.Thanks in advance. 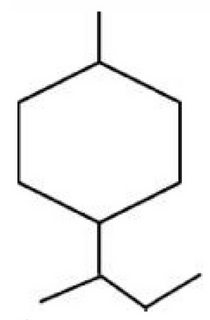 According to the current version of Nomenclature of Organic Chemistry – IUPAC Recommendations and Preferred Names 2013 (Blue Book), the ring is selected as the parent structure to construct the preferred IUPAC name.

Thus, the compound given in the question is named as cyclohexane. The substituents are expressed as prefixes, i.e. x-(butan-2-yl)-y-methylcyclohexane.

The most important simplified criteria for the numbering of the locants x and y are:

The corresponding actual wording in the current IUPAC Recommendations reads as follows:

The compound that is given has no principal characteristic group that would be expressed as a suffix and no multiple bonds. Thus, Rules (c) and (e) are not relevant in this case.

Rule (f) does not lead to a decision since the locant set (all considered together in a series of increasing numerical order) is always ‘1,4’.

Finally, Rule (g) stipulates that the lowest locant is assigned to the substituent that is cited first as a prefix in the name. Therefore, the correct name for the compound that is given in the question is 1-(butan-2-yl)-4-methylcyclohexane.

23
Is the ring or the chain chosen as the parent structure in octan-2-ylbenzene?
8
Nomenclature of cycloalkane with substituent having the same number of carbons
5
IUPAC nomenclature of alicyclic compound with an equal number of cyclic and acyclic carbons
2
Naming compound containing a ring (cycloalkane) side chain?
2
How do I decide the parent chain of an organic compound that has a ring as well as a side chain while naming the compound?

3
What does the prefix "dihydro" in the systematic name of luminol refer to?
3
Why is a hydrocarbon tail non-polar?
6
Facial selectivity of iodonium formation in an iodolactonisation
1
What is the order of nomenclature priority among an alkyl side group, a double bond, and a triple bond?
5
Hydroboration on Limonene
4
IUPAC naming of 1,2-disubstituted cyclohexane derivative
9
How do you name this compound using IUPAC system (including steps)?