But this is given wrong according to my textbook. What is my mistake?

I actually take issue with the question (which was asked of you not by you), as I think this oversimplifies a molecule, that still isn't well understood in the first place.

That is why I find this question incredibly difficult to answer and why I find that Nuclear Chemist's answer dangerous, because it propagates myths about bonding that have been disproved already.

But enough of the commentary, let's clear up some issues.

There comes a time, where you should realise that hybridisation is not always a useful concept to understand bonding. This time is now.

Your analysis of the bonding is not wrong, but maybe a bit too simple.

The reason for this is that the molecule has a very high symmetry, but it also has an unpaired electron. The problem here is that orbital symmetry cannot match with spacial symmetry, which means that hybridisation doesn't actually work here.
A bit more precise: The electron density of α-spin electrons is different from that of β-spin electrons. The hybridisation of the orbitals to produce either electron density need to also be different. In the very least you would have to consider two different hybridisation schemes at once.
All possible states (that is independent of any hybridisation model) then will be in superposition to form the actual ground state. This ground state will have a complicated bonding situation.

Of course you can use VSEPR theory to predict the shape of the molecule, that is a very good starting point. You will find out that the molecule is bent, and that matches the crystal structure. A bent molecule of the form $\ce{B-A-B}$ always has $C_\mathrm{2v}$ symmetry, it therefore always has π-orbitals. Whether those orbitals are essentially bonding or not, is an entirely different question.
It also does not tell you which atomic orbitals will be involved.

One obvious fault in the question is that there is no involvement of d-orbitals whatsoever in the molecules. The d-orbitals of chlorine are simply not accessible energetically; at least not in the way that it would form stable bonds. Anyone who is jibber-jabbering about 'octet-expansion' has stopped learning about chemistry about 20 years ago. (There are plentiful discussions about this on chemistry.se alone.)
As long as that last part of the question is not meant as a trap (which would be even more awful), it alone shows that the exercise is not well-thought about.

The π-orbitals will therefore be entirely composed out of p-orbitals of the involved elements.

If you look close enough you will realise, that writing a valid Lewis structure of the molecule is not that hard, and you don't even need π-bonds in the first place.
These are solely dictated by symmetry.

In principle that molecule is of a similar system like allyl-systems (with two extra electrons), or ozone (with one more electron). You will need a better than rudimentary grasp at molecular orbital theory to understand it.
Let's assume that things would be easier, and try tor roll with that for as long as possible. I have written a couple of times that terminal atoms can be (as a rule of thumb) regarded as having sp-orbitals. Therefore the two oxygen will use one sp-orbital to form a σ-bond towards chlorine, the other one is an in-plane-σ-lone-pair. That leaves for every oxygen one in-plane-p-lone-pair, which we will (in the spirit of the approximation) disregard as having any effect on bonding. There is one remaining out-of-plane-p-orbital per oxygen. These will, due to symmetry, participate in π-bonding.
From VSEPR-theory we know the molecule is bent. The approximate hybridisation of the orbitals of chlorine that match that would be sp². Let's just assume that this is the case. Two of these will be the counterpart for the σ-bonds. The remaining will be either a lone-pair, or singly occupied. Already in this very simplified view, the problems start here. Let's further assume, that because it has higher s-character, the orbital will be lower in energy and therefore be doubly occupied. That leaves the odd electron in an out-of-plane-p-orbital, which will participate in π-bonding.
In this simplified and assumption riddled thought-experiment, the π-bonding will form three molecular orbitals pictured below. 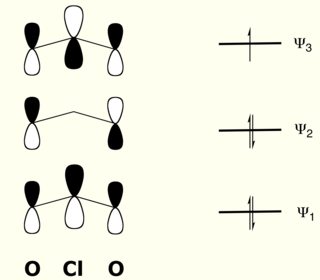 Essentially the stabilisation from the π-bonds itself should be small, and could be described as π-backbonding, or is similar to negative hyperconjugation; maybe negative π-backbonding (!?).

This all was deduced from a very reduced and simplified set of theory; the reality is probably by far more complicated. Some of the greatest minds of (theoretical) chemistry have been puzzled about $\bf\ce{ClO2}$, and we have not even started to discuss the three-electron bond they assumed in between. Let's just say that this is not an undergrad study problem.

I know this doesn't really answer your question, and this is not very satisfactory either, but this is science: It often gives you more questions than answers.

What I would suggest to you is to start with working out how many electrons (valence electrons) are present in the molecule.

Each oxygen atom ($\ce{O}$) brings six electrons and the chlorine ($\ce{Cl}$) has seven electrons. This gives us a total of 19 electrons.

We should aim for having 8 electrons around each atom, keep in mind that the more heavy p block elements can expand above an octet.

Normally if we have a perfect $sp^3$ molecule such as methane ($\ce{CH4}$) we get an angle of 109.5 degrees between the bonds. But in the case of ammonia ($\ce{NH3}$) or water ($\ce{H2O}$) the increased ability of the lone pairs to repel electron pairs decreases the angle.

Not the answer you're looking for? Browse other questions tagged hybridization or ask your own question.

7
Structure and bonding in ClO2
-1
ClO2 molecular orbital diagram?
0
How do you draw the pi MO diagram for the acetate ion CH3COO-

6
Is this textbook bonding picture of hybridization in ethene wrong?
2
What is the hybridisation of the carbons in the allyl radical?
3
Is there a shortcut method to calculate the Steric Number?
5
Is hybridization of the cyclopropyl anion sp5?