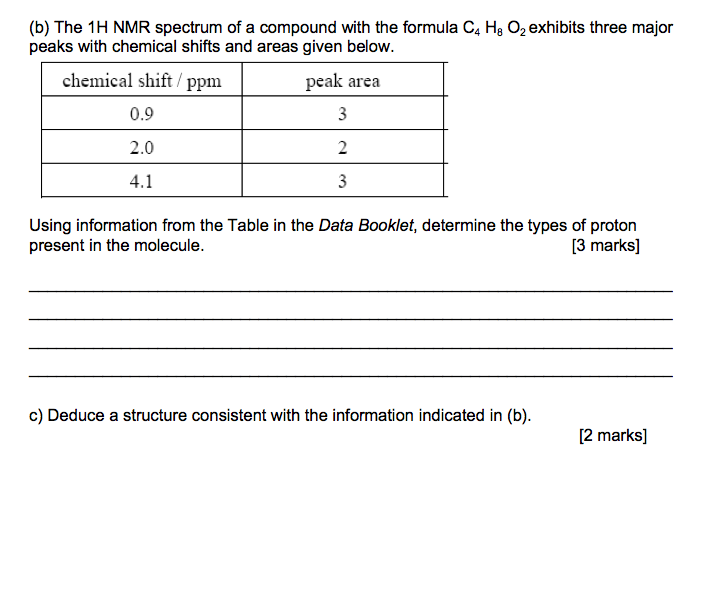 here is the data booklet we must refer too: 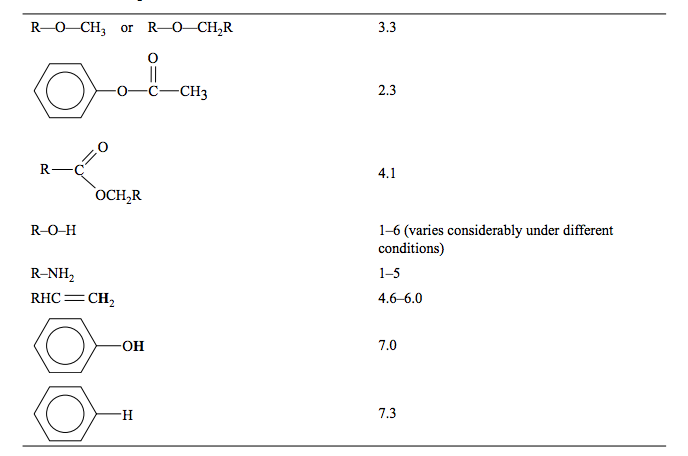 Here is the exam paper solution: 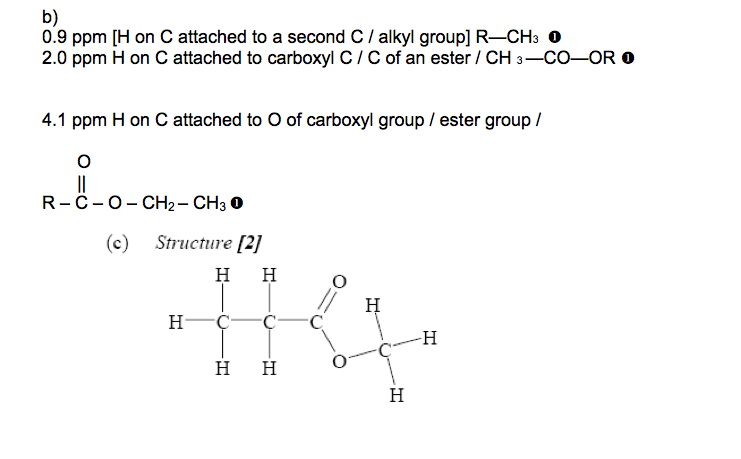 I dont understand how they conclude this.

I found it quite hard to follow both the question and the answer, so I am going to state a few relevant things and paraphrase the answers of @LDC3 to add some clarity.

That the areas need to be considered as a ratio instead of absolute values is important: if the molecule was symmetric, with an ethyl group either side of a ketone e.g. C₅H₁₀O you would see a peak ratio of 3:2 (two environments), but there would actually be 6 protons in the first environment and 4 in the second. This is a bit like empirical vs molecular formulae.

Some tips for deducing structures

1) Start with 'characteristic' shifts. These are usually the lowest and highest shifts.

Here the 4.1 ppm shift is characteristic of ester protons, i.e. -(C=O)OC H₂R (R can also be a proton too!) where, much like the data sheet above, bold is to tell you which protons are being referred to in a more complicated structure. The shift at 0.9 ppm is characteristic of protons which are attached to a standard saturated alkyl chain. This tells you that those protons aren't very near any oxygen, nitrogen or other electron withdrawing or electron donating groups.

The shift at 2.0 ppm is likely to be alkyl chain protons which are next to an electron withdrawing group, which conveniently you have already identified as an ester group by looking at your characteristic shifts! In this case, that means you can put the 0.9 ppm shifted protons at one end of your structure, because there is nowhere else to put them.

The last thing to check is which end of the molecule the 0.9 ppm shifted protons go on. i.e. is the molecule methyl propanoate or ethyl ethanoate? To do this you can look at the peak areas. For this example it is quite easy to check because there are 3 protons at 4.1 ppm, so you know that you have a methyl ester group -(C=O)OC H₃. Our R group from earlier is an H after all! The resulting structure is the one shown in the example: methyl propanoate.

For the chemical shift of 2.0, the person used the example of a methyl group attached to the carboxyl group, he didn't mean to imply that there are 3 hydrogens. In the structure he presented in B, you will see that there are only 2 hydrogens, not 3.

Also, for the chemical shift of 4.1, he used ethyl (which has 2 hydrogens) instead of methyl (3 hydrogens).

Not the answer you're looking for? Browse other questions tagged homework spectroscopy nmr-spectroscopy mass-spectrometry spectrophotometry or ask your own question.

0
How to calculate m/e value for the base peak in mass spectroscopy?
3
Assigning 1H NMR spectrum and predicting peak coupling patterns for 2H-1-benzopyran-2-one
4
How to explain two NMR spectra of the (allegedly) same compound with slightly different shifts?
2
Is there a systematic approach to determing structural formula from NMR spectra?
16
Correlation between 1H and 13C shifts - coincidence or not?
3
Deduce the possible structure given spectroscopic data for the aromatic compound
2
Comparison of chemical shift of methyl group attached to alcohol and carboxylic acid
1
1H NMR of cyclohexanecarbaldehyde
0
Identifying an alkyl bromide from NMR information