The given answer is 1,1-dicyclopropylmethanone:

Step 1 is abstraction of acidic H by the strong base. Then, there's surely going to be anchimeric assistance. But there can be two places where the first carbanion can attack: either at the nearer carbon to form the cyclopropyl group or at the far end one to form a five-membered ring. If it does the former, then this process will be repeated and another cyclopropyl group would be made.

Why not make a more stable five-membered ring in the first step, and then again perform E2 to get 2-ethenylcyclopentan-1-one?

I think the product may be formed by the following pathway.

First, the carbanion will form when the strong base abstracts the proton from the α-position. The lone pair generated would obviously have two points of attack, either at the nearer carbon to form the cyclopropyl ring or at the farther carbon to form a five membered rkng where the whole controversy lies.

This is similar the basic resonace observed in cyclopropane.

The carbonyl functional group also triggers the reaction foreward towards formation of the product.

Let us begin by observing the resonance structures of the carbonyl functional group.

Next, we have to observe the structure of the 1-methylcycloropyl carbocation.

Due to ring strain the bonds are bent and a special kind of resonance involving the σ C-C single bond is observed.

In fact the bonds are actually sp5 hybridized i.e. having large p character to ease the ring strain.

The enormous stablity can be alluded by the following resonce diagram.

Moreover, the immense stablity of tris(cyclopropyl)methyl carbocation, is actually due to this σ-resonace. It is actually the one of the most stable carbocations known. 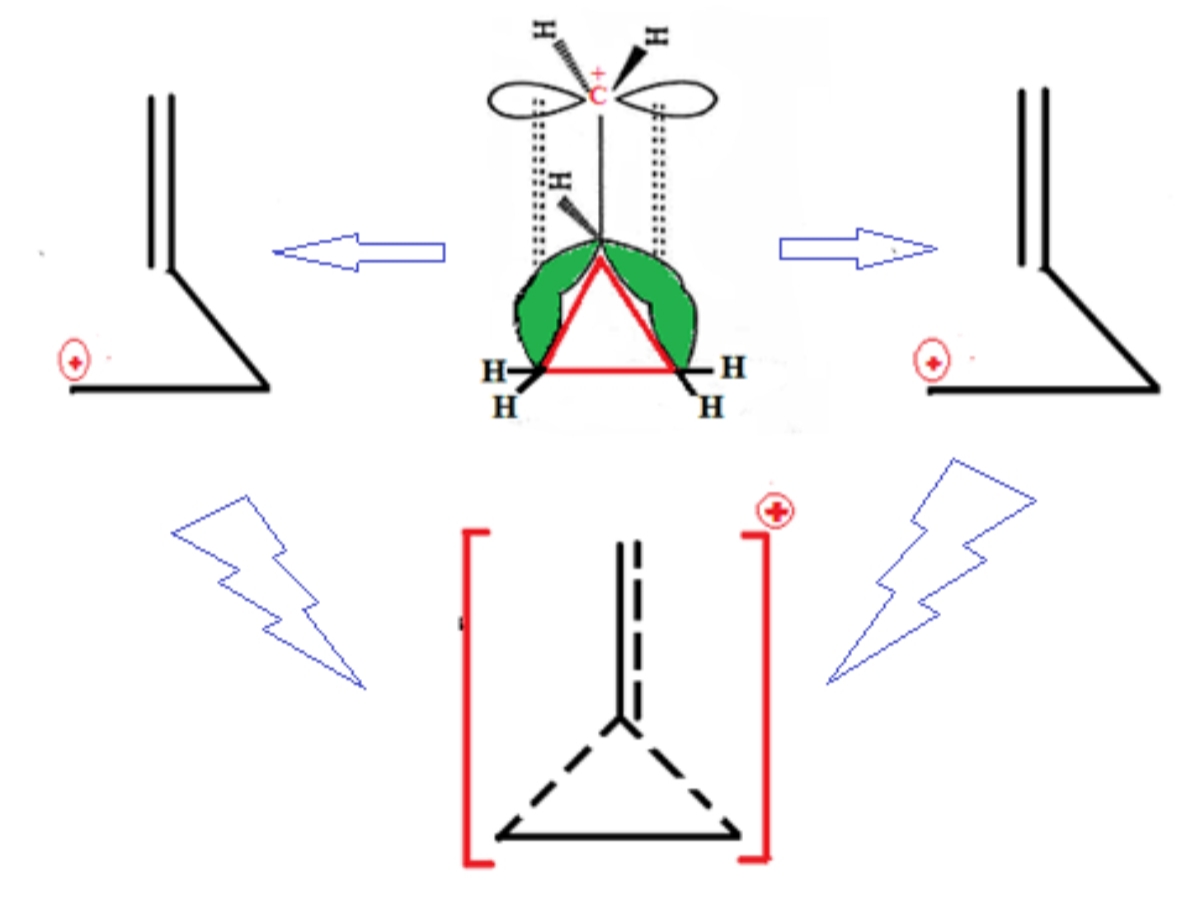 As the number of cyclopropyl groups increase, the stablity increases. 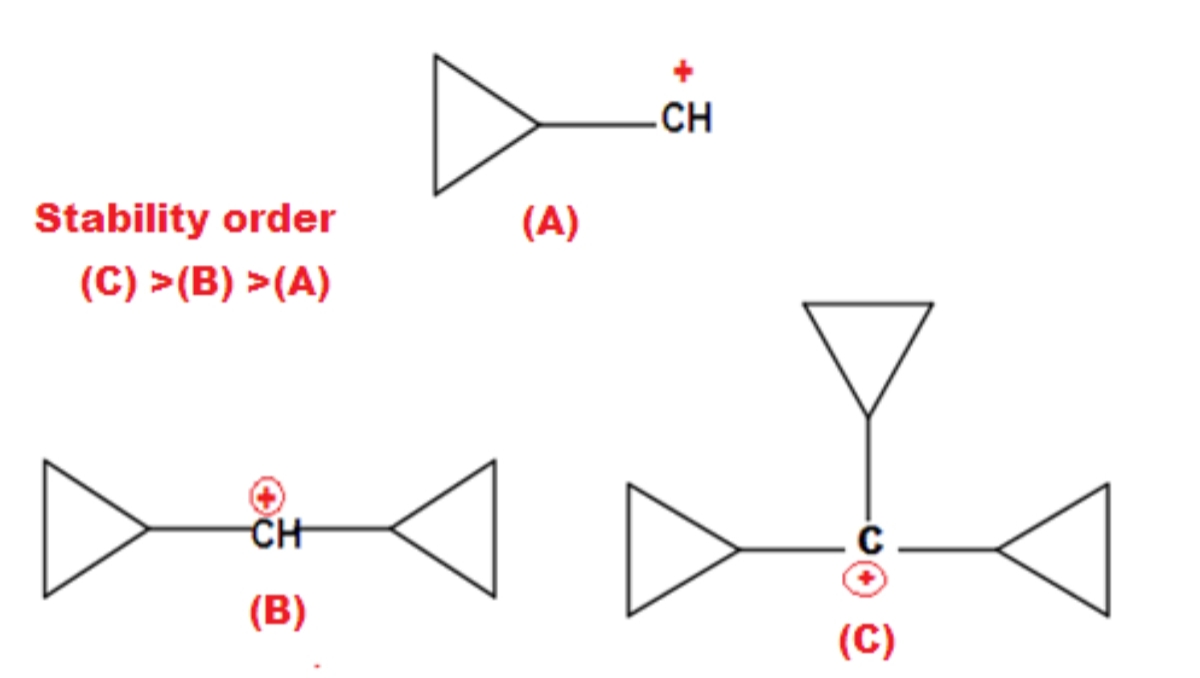 Now to observe a combination of both.

In the final product the M- effect of the carbonyl group will favour the extended delocalisation of electrons of the σ-bond over the oxygen.

Thus, the enourmous stablity concept of cyclopropane may be attributed to the compound under question by the following diagram: 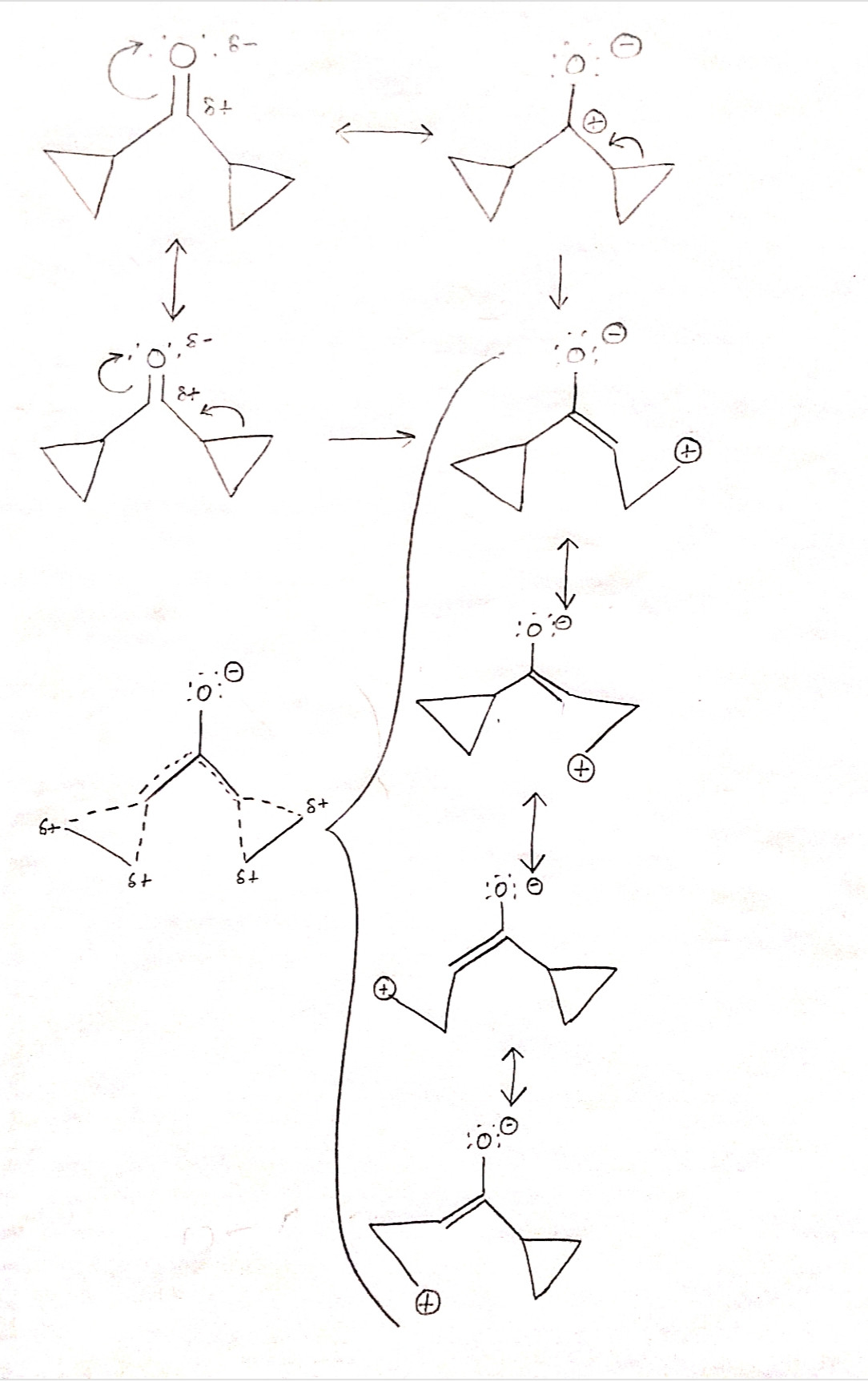 To draw the resonance structures in a simplified way we first show complete charge seperation between the carbon and oxygen of the carbonyl group. Then the structure becomes similar to a cyclopropylmethyl carbocation showing the required stablising resoance of σ-bond.

Due to this unique resonance effect, also known sometimes as dancing resonance, the product becomes exceptionally stable, more stable than the 5 membered ring obtained in the other case.

Enolization is promoted greatly by the basic environment. α-Carbon due to the evident resonance with O- gets a negative charge, becoming able to attack the closest terminal carbon to form the 3-membered ring. Then the enolization step is repeated for another neighbour of the carbonyl group.

45
What is the reason for the exceptional stability of the cyclopropylmethyl carbocation?
7
What is "dancing resonance"?
8
Ring expansion in cyclic compounds

5
Photolysis of N-bromo compound in acidic conditions (radical cyclisation)
2
Deuteration of enone - mechanism?
1
Can some one please explain alkyl shifts for me
1
Does the reaction of 2‐hydroxy‐6‐methyl‐5‐nitrocyclohepta‐2,4,6‐trien‐1‐one with NaOH involve ring contraction?
8
What does the intramolecular aldol condensation of 6-oxoheptanal form?