Convention for numbering of carbons

I'm trying to understand how carbons are numbered in organic molecules (i.e. as in the following image).

(source: Principles of Biochemistry by Nelson and Cox, p. 532)

I've read and heard different methods, among which:

These methods could come to contradictory conclusions, though. One example I could think of: 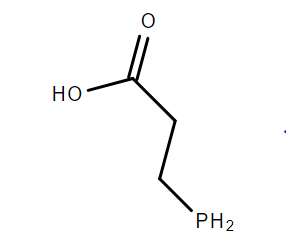 Phosphorous would be the highest atomic number constituent, while the remaining rules (carbonyl carbon, total mass and oxidation state) would assign the carbonyl carbon the lowest number.

I assume some are just simplifications. What is the correct method, or is there no single general one?

Your initial example showing derivatives of glucose and fructose might be misleading since the nomenclature of natural product parent compounds does not necessarily follow the usual nomenclature rules of general organic chemistry.

The carbon atoms of a monosaccharide are numbered consecutively in such a way that:

(1) a (potential) aldehyde group receives the locant 1 (even if a more senior characteristic group is present);

(This rule is probably easier to understand if you draw the monosaccharides in their acyclic form.)

Therefore, the numbering in your own example corresponds to the name 3-phosphinopropanoic acid since the acid group is the principal characteristic group of this compound.

6
Carbon numbering in carbohydrates
6
What is the convention of numbering carbon atoms in organic molecules?

4
How to define the atom numbers in unsaturated hydrocarbons correctly according to IUPAC?
11
Naming convention for graphs?
16
IUPAC systematic name of Carminic Acid
16
Reduction of glucose to hexane with hydroiodic acid
3
Naming convention for adduct ions
4
What is the correct numbering & order for this molecule?