What is the mechanism for the oxidative cleavage of diketones via permanganate under basic/hot conditions?

The products of the reaction are carboxylates. What exactly would cause the alkyne to cleave?

In J. Org. Chem. 1979, 44 (15), 2726–2730, the authors Lee and Chang have investigated the permanganate oxidation of alkynes to α-diketones. In addition, they investigated the oxidative cleavage of several α-diketones to carboxylic acids. In the case of hexadecane-8,9-dione, permanganate oxidation under at least three sets of conditions provided n-octanoic acid 8 (major) and n-heptanoic acid 7 (minor). They suggested that the oxidation of the dione 1 leads only to octanoic acid 8 via intermediate 4 while oxidation of enol 2 affords 2-oxononanoic acid 6 and ultimately octanoic acid 8 via oxidative decarboxylation. In addition, oxidation of heptanal 5 affords heptanoic acid 7. The three solvent systems employed were acetone/aqueous HOAc, aqueous H2SO4 and water. Starting material was recovered in each experiment. Tetradecane-7,8-dione showed similar behavior.

For the mechanism of permanganate oxidation of alkynes to α-diketones, see the accompanying post by @Raul Luciano. 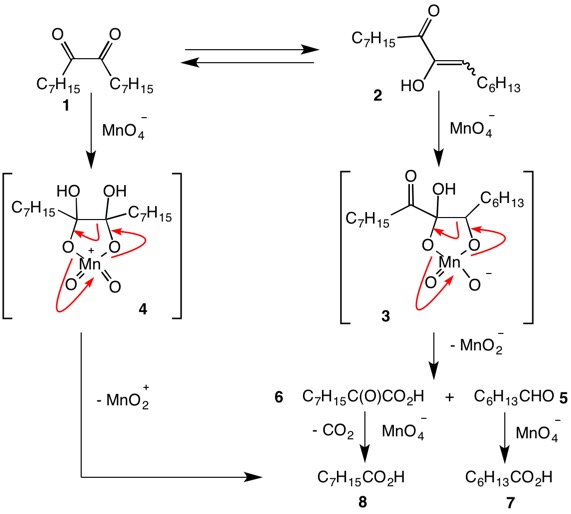 Alkynes react just as alkenes in the oxidative cleavage with $\ce{KMnO_4-}$ (the mechanism is the same). The difference is that since there is a triple bond, $\ce{MnO_4-}$ doesn't break the molecule apart like it does with alkenes (only if you use high temperature and high base/$\ce{MnO_4-}$ concentration), instead it forms a diketone. What causes the alkyne to cleave is the oxidant ion $\ce{MnO_4-}$ that is reduced to $\ce{MnO_2}$. 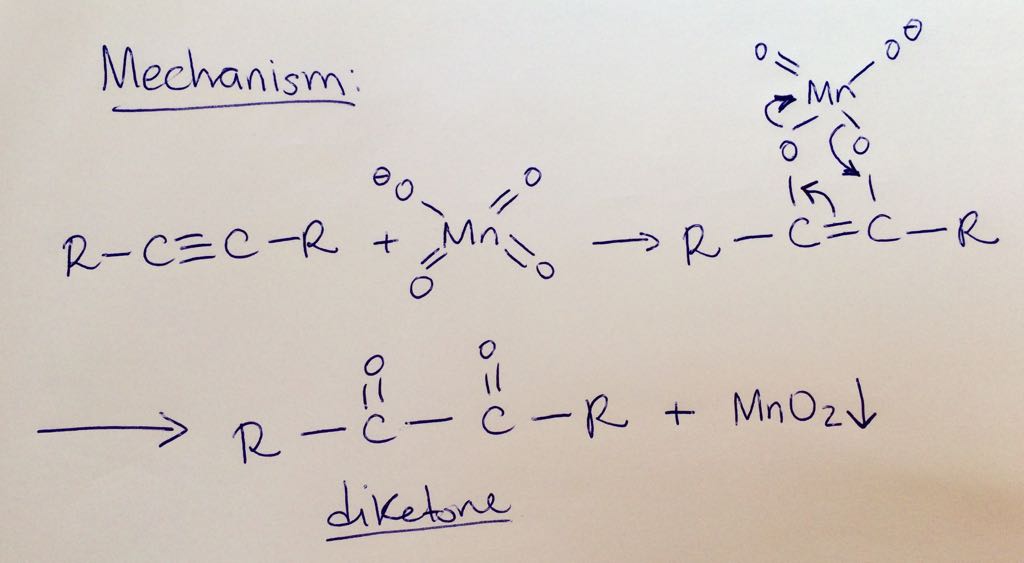 Not the answer you're looking for? Browse other questions tagged reaction-mechanism organic-oxidation or ask your own question.

4
How to figure out if the reaction proceeds via SN1 or SN2 mechanism?
2
Hydrolysis under basic conditions
2
Mechanism for oxidative cleavage of tertiary alcohols by NaOCl
4
Mechanism of ring formation of an epoxide under acidic aqueous conditions