How come one of the hydroxides in the phosphate group are more acidic than the other? 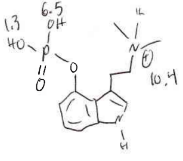 How come one of the hydroxides are more acidic than the other in the phosphate group? Is because of electron repulsion? Can the substituents on a phosphorus group not move around? Why are the two hydroxide groups on the phosphorus atom not the same functional group?

Because the rendering is not really accurate. It would have been better to render the two dissociation constants without trying to associate them with specific hydrogen atoms.

Given the neutral phosphate group with both hydroxyl hydrogens attached, either one has an equal probability of being removed as a proton, corresponding to the lower of the two $\mathrm{p}K_\mathrm{a}$ values. The drawing simply picked one of the protons at random. Then with that proton removed and the functional group now negatively charged, the second hydroxyl proton has become harder to remove and that is what the higher $\mathrm{p}K_\mathrm{a}$ represents.

Not the answer you're looking for? Browse other questions tagged organic-chemistry acid-base organophosphorus-compounds or ask your own question.

5
Which alpha Hydrogens are more acidic?
19
Why are lactones more acidic than esters?
0
Why are phosphate-phosphate bonds weaker than phosphate-water bonds?
0
Phosphate group acidic or not?
19
Multiplet shape in proton NMR of morpholines
7
Are there ethanol and methanol analogues with more than one hydroxyl group?
5
What is the difference between a phosphoryl group and a phosphate group?
0
Why are acidic solutions often neutralised with carbonates rather than hydroxides?