Why is it a reduction from a ketone to an alcohol? [closed]

Why is it a reduction from a ketone to an alcohol (using $\ce{LiAlH4}$)? I'm not able to figure out the oxidation state of carbon.

As you can read from the link mentioned in the comment to the question, oxidation number is not a useful concept when dealing with organic compounds.

So we won't be determining oxidation number of atoms to know whether oxidation or reduction has happened.

We can follow the basic definition of oxidation and reduction to determine which one of the two is taking olace:

So in case of conversion of a ketone into a 2° alcohol, two atoms of hydrogen is add for one carbonyl group.

And since hydrogen atoms are being added to the molecule (here, ketone), we can conclude that the molecule has been reduced.

Like Ivan already states in Oxidation State Of Propene, there is limited use of oxidation states in organic chemistry. However, you can still apply the schemes that I have written about in Electronegativity Considerations in Assigning Oxidation States.

The carbon formally goes from $+2$ to $0$, i.e. it gains electrons, therefore it is reduced.

Note that oxidation states are not actual (partial) charges. Below you can see the partial charges of acetone and 2-propanol optimised on the DF-B97D3/def2-SVP level of theory. You might note that they are quite different from the oxidation states. 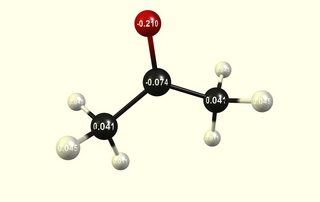 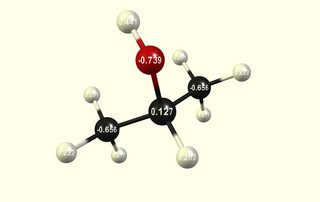 Not the answer you're looking for? Browse other questions tagged organic-chemistry oxidation-state organic-reduction or ask your own question.