Is cyclohexane saturated or unsaturated?

I have this confusion that cyclohexane is of form $\ce{C_{n}H_{2n}}$ and so it must be an unsaturated compound, but also it does not have a double or triple bond so it must be saturated.

organic-chemistry cyclohexane
Share
Improve this question
edited May 5, 2019 at 15:14

Cyclo comes from the Greek word 'kyklos' which means circle.

The cyclohexane molecule is in the form of a circle therefore it can have the formula $\ce{C_nH_{2n}}$ and still be saturated. 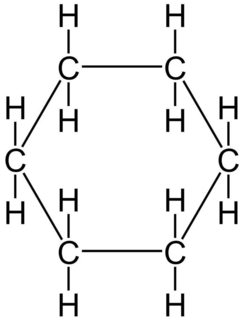 As what is mentioned in the cpmment by Ivan and Waylander, your definition of saturated compounds is flawed.

So let just set the definition straight first. The definition of saturated compounds are compounds that the carbon atoms are bonded singly with each other. (This definition will work for now in our example.)

So based on the definition above and the image provided by CKA, we can clearly so all the carbon atoms are bonded singly with each other and thus prove that it is a cyclohexane is a saturated compound.

But how can a compound be saturated but have the general formula $\ce{C_{n}H_{2n}}$ you might ask?

The key thing here is that $\ce{C_{n}H_{2n}}$ is unsaturated when is acyclic or non-cyclic such as n-heptene, metylbut-1-ene, 2,3- dimetylpent-1-ene etc. These compounds have straight or branched carbon chain (and the carbon are not formed into a ring or a loop).

We can try prove that a cyclic saturated compound has a general formula of $\ce{C_{n}H_{2n}}$.

Lastly, since the carbon atom at both end is still capable to have one more single bond, we will connect the single carbon atom which the last one and thus make a loop of carbon chain/a cyclic compound. Since we are just connecting the carbon atoms and not adding or removing any atoms from it, the formula will still remains as $\ce{C_{n}H_{2n}}$.

Not the answer you're looking for? Browse other questions tagged organic-chemistry cyclohexane or ask your own question.