Why is dipositive dilithium more stable than neutral dilithium? [closed]

The comment asks "Why is Li2+ more stable than Li2". Li2 has a relatively low bond energy (gas phase) of 27 kcal/mol (Cotton and Wilkinson, Inorganic Chemistry). The energy cost to make one mole of Li gas is 37 kcal (CRC Handbook). The ionization energy of Li is 5.39 eV = 124 kcal/mol.

Breaking a Li2+ gas molecule into Li + Li+ involves not the separation of two uncharged atom, but the separation of a very small Li+ ion from a Li atom which provides some charge accomodation. The heat of formation of Li+ in water is 66 kcal/mol (presumably from aquation with 4 waters); the hydration bonding is worth about (124 + 37 + 66)/4 = 54 kcal/mole each. So I would estimate the bond between Li+ and Li to be perhaps 40 kcal/mol, at least a significant fraction of 54 kcal/mol, and probably more than 27 kcal/mol.

The important point is that the unusually small size of the Li+ ion makes it able to polarize a neutral atom to form a strong bond (and come in closer!), whereas the neutral atoms have only uncharged molecular orbitals to spread their electrons over. It is highly unlikely that larger atoms (Na, K) would show similar stability for an ion-molecule compared to a neutral molecule. Magnesium might be a similar exception, however, since both Li and Mg have small radii; it might be interesting to compare stabilities of Mg2 and Mg2+.

Here you're saying that Li2+ is more unstable than Li2

Hence Li2+ must be unstable than Li2

And here you're confirming that Li2 is more stable than Li2+, corroborating with your previous statement

but then why Li2 is more stable than Li2+

But in your question you're saying the opposite, that Li2+ is more stable than Li2. So i'm confused with what you're trying to ask.

In my knowledge, based on inorganic text books, you can explain the stability of a molecule using molecular orbital theory (MOT). But MOT is a bond theory and Li2+ has no bond unless you're talking about (Li-Li)2+. If this is the case, Li2 is more stable than (Li-Li)2+ -(Li-Li)2+ is not even going to exist according with MOT - since the bond order for Li2 is 1 and (Li-Li)2+ is 0 as shown in the diagram below. 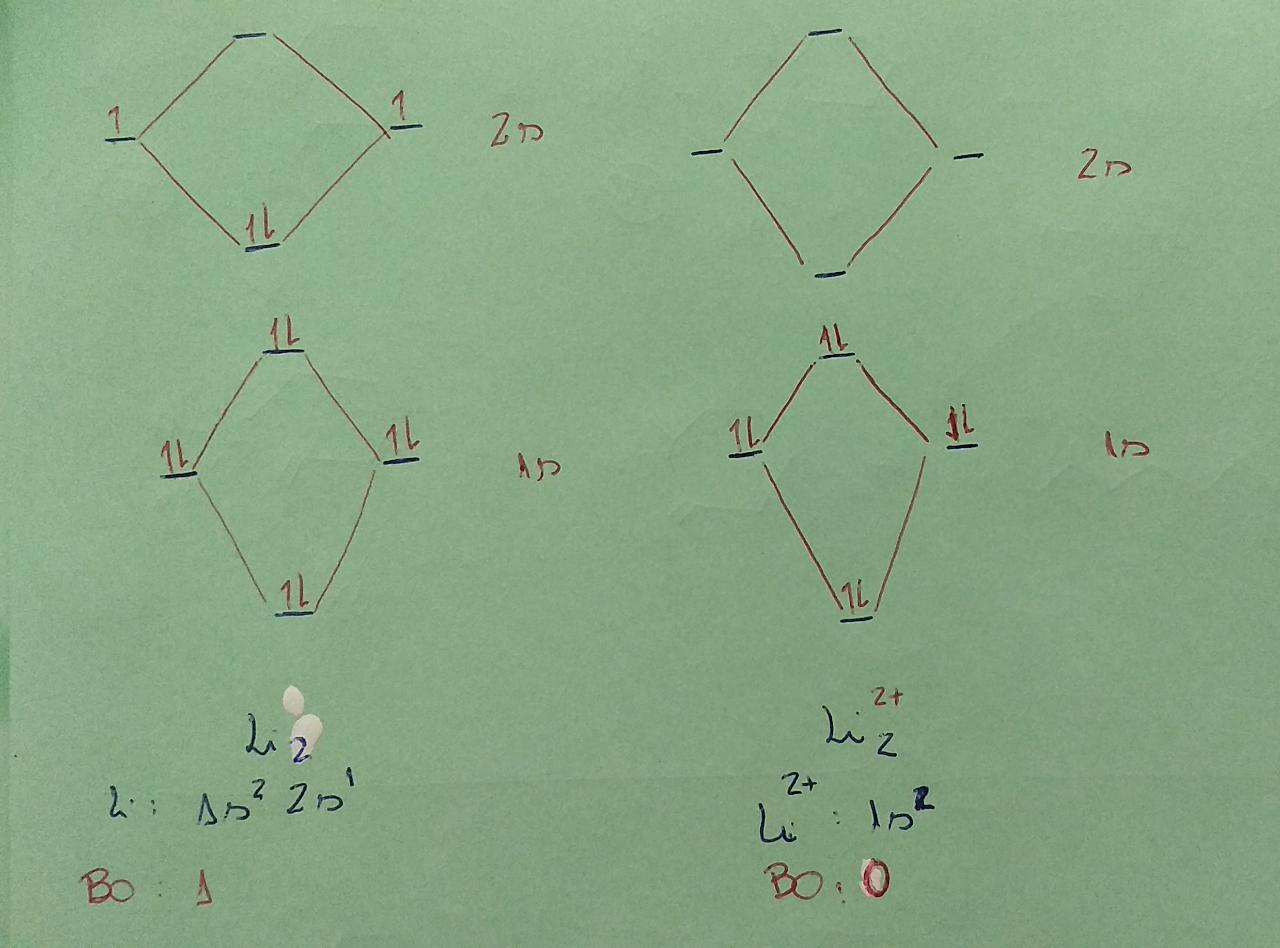 If you're trying to compare Li2+ and Li2 I don't know if it's possible, i've never seen something like that.

Not the answer you're looking for? Browse other questions tagged inorganic-chemistry molecular-orbital-theory stability or ask your own question.