Are SN2 reactions in equilibrium?

I'm learning about SN2-reactions, and my text book gives the following examples of these reactions:

I'm confused because $\ce{Br^-}$ seems like a better nucleophile than $\ce{I^-}$, which would favor the reverse reaction of (2)?

When we talk about Sn1 or Sn2 reactions (and any other reaction to be honest), not only the reactants are crucial to describe what's going on but also the solvent you used. It is perfectly possible that the second reaction will be favored in the direction shown, as long as you use the right solvent for this.

There are two types of solvents one can use in an Sn2 reaction: polar protic (which has a reasonably acidic hydrogen in its structure) and polar aprotic (has a net dipole moment but no acidic hydrogens).

So what does the solvent has to do with the reaction?

When you use a polar protic solvent, such as methanol or water, the nucleophile species (ions such as Cl- or molecules such as ethanol) will be surrounded by an overwhelming number of solvent molecules that will interact strongly with them by dipole-dipole interactions or hydrogen bonding. This creates a barrier around the nucleophile, making it considerably more difficult to approach the positive center and consequently slows the reaction. 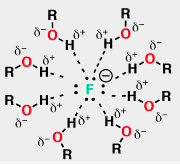 If you consider only the nucleophile, Br- is stronger than I- since it has a smaller ionic radius and, therefore, has a more 'concentrated' electron cloud (less polarizable). If no solvent effect was considered, the reaction as shown in your textbook would be incorrect since the equilibrium would be towards the formation of methyl bromide.

HOWEVER, if you use a polar protic solvent, like methanol, the order of nucleophilicity is inverted (because of that surrounding barrier of solvent molecules) and I- becomes a better nucleophile than Br-.

So, to be consistent and correct, your textbook should also provide the solvent in which this reaction is done. If it is a polar protic one then it is correct.

(I took these pictures from master organic chemistry, they have a good text talking about it here: https://www.masterorganicchemistry.com/2012/12/04/deciding-sn1sn2e1e2-the-solvent/ )

2
Stereochemistry in Sn2 reaction
1
How to predict SN2 reaction when comparing nucleophilicty and leaving group ability
1
Formation of acid chlorides
1
Displacement of leaving groups in organic reactions
2
Reactivity of primary and tertiary alkyl halides
4
Can the nitrogen of an amide displace a primary chloride in a SN2 reaction in the presence of a strong base?
4
Why do polar aprotic solvents favour SN2 over E2?