So the limit of ionizing radiation seems to be UV light.

I'm wondering if IR light or Visible light can excite the electrons in an atom.

It has to do with the difference in energy level right? So the closer two energy levels the lower the frequency/energy.

And that is why coordination complexes and/or transition metals are usually colored because once coordinated, the d orbitals lose their degeneracy?

I also just wanted to clarify that this excitation is different from the color we see for conjugated systems. That is because these systems when conjugated can absorb light? And so we see what is not absorbed and reflected back to us?

Different regions of the electromagnetic spectrum correspond to different atomic and molecular processes, each with one or more associated spectroscopies. Here is a general summary, with decreasing frequency/energy going from left to right: 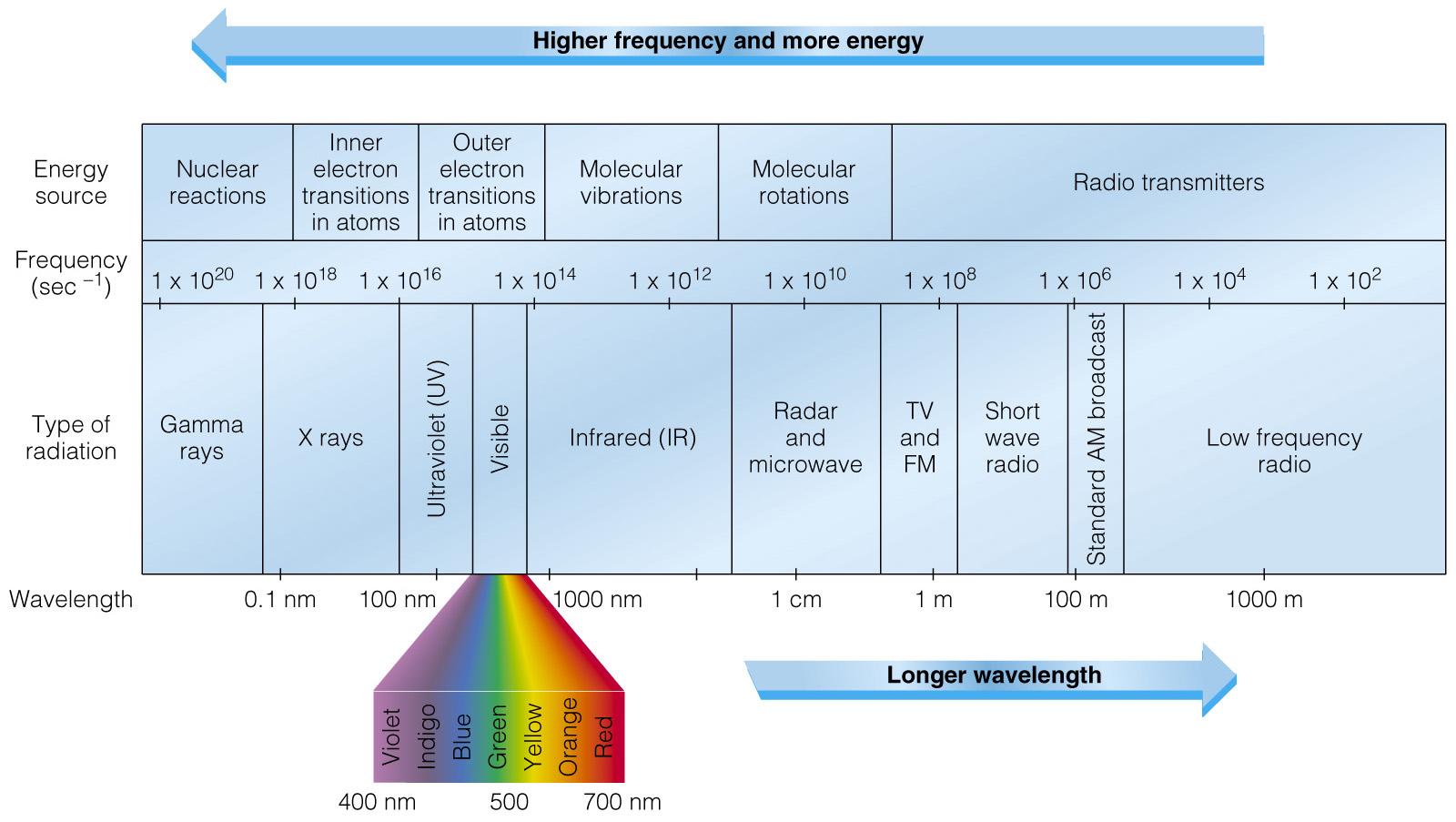 In order to excite a valence electron, the longest wavelength or lowest energy radiation is usually in the visible region, not longer than ~700 nm. I'm not sure if there is a lower limit to this energy, or what the observed lowest energy electronic transition is, but certainly in this region, there is some overlap with the energy required to excite molecular vibrations. For some nice cases you can perform vibrational-electronic spectroscopy (usually called "vibronic" spectroscopy), where you resolve a number of vibrational transitions (peaks) as fine splitting or fine structure for a single electronic transition: 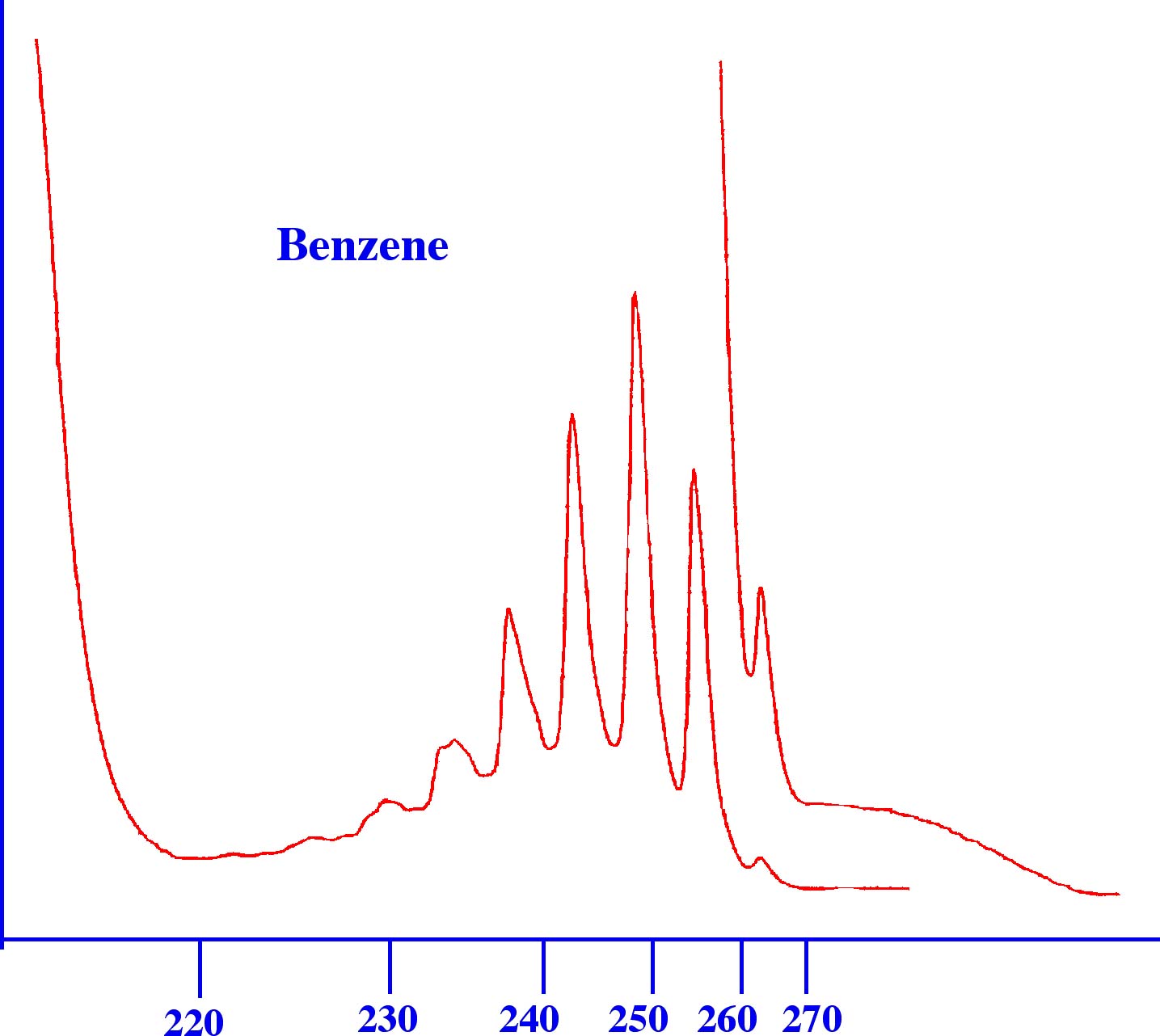 However, we do not say that "infrared radiation can excite electrons", though there is a range of frequencies where the types of excitation couple together. See also rotational-vibrational (rovibrational) spectroscopy; a nice example is hydrogen chloride in the gas phase.

The reason coordination complexes are often colored is because there are valence electronic excitations that correspond to the absorption of electromagnetic radiation in the visible region. The reason many molecules or complexes are white is because their lowest energy electronic transition is in the ultraviolet region. This is more general than losing degeneracy, and holds true for any macroscopic or microscopic system. It is not different from the color we see for conjugated systems. If the lowest energy available transition of a system is in the visible region, the system will appear colored. If it absorbs red-orange light, the opposite side of a color wheel will show you that it should appear green-blue. What you see as the system's color is the remaining color after subtracting the absorbed color. Yes, the kinds of orbitals involved are different (d-d transitions or metal-to-ligand charge transfer versus $\pi\rightarrow\pi^{*}$), but the transition energy matching is the most important thing.

For the "limit of ionizing radiation", ionization refers not to the excitation of an electron, but its removal:

The atom with the smallest first ionization energy is sodium, given as 496 kJ/mol. Converting this to a wavelength gives roughly 0.013 nm or 13 pm, which is a hard X-ray. Normally X-rays only have enough energy to excite core electrons, so this is the minimum wavelength for atomic ionization. Many atoms will require gamma rays, though I also assume that when looking at whole molecules rather than atoms, the ionization potential may be reduced.

Now to touch on the specific example of rhodopsin. It is a protein that contains retinal, which undergoes photoisomerization: 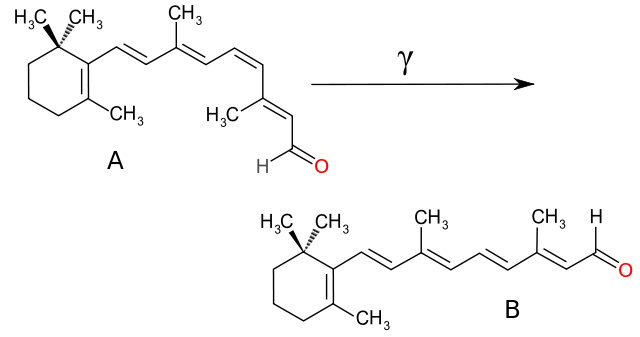 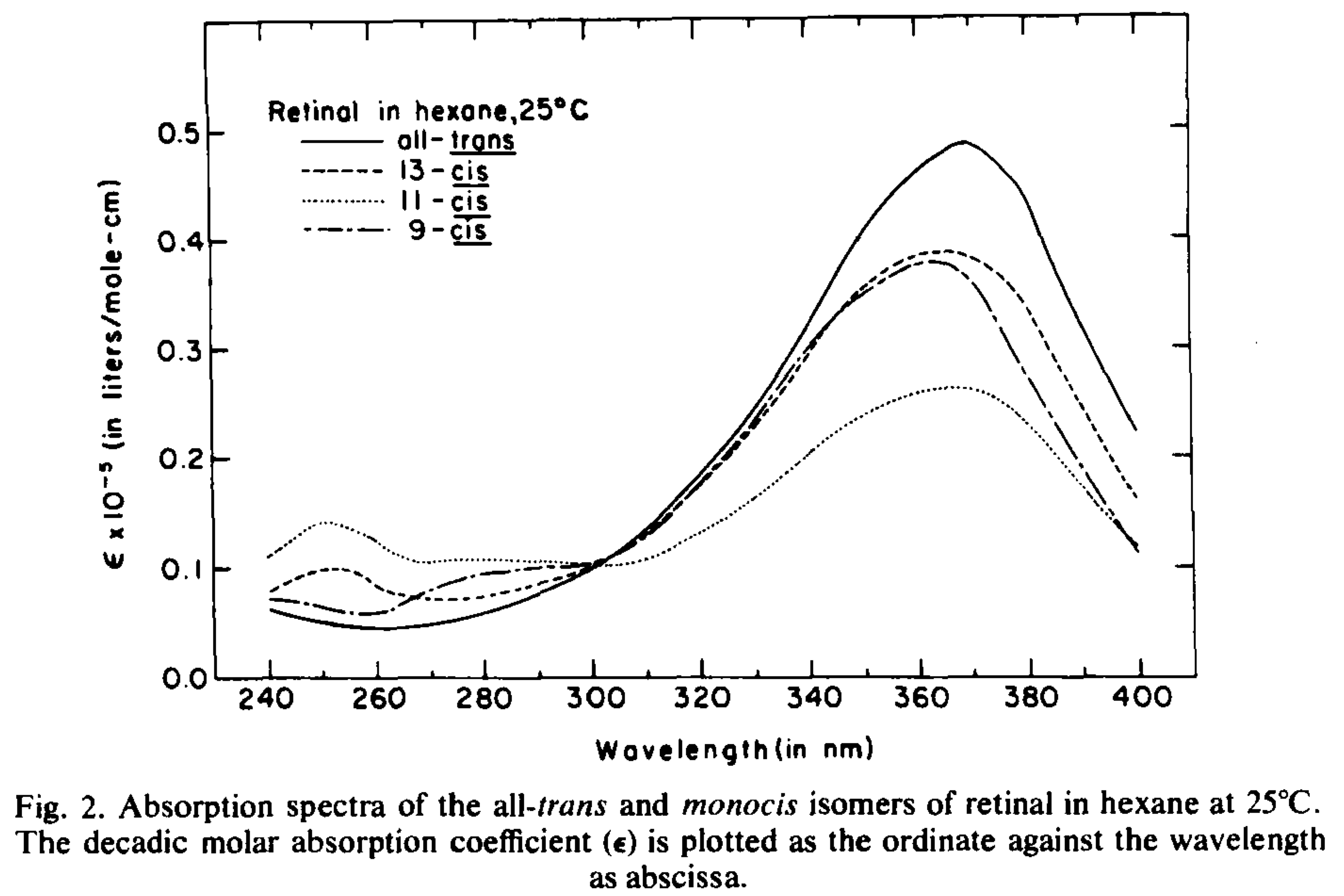 If we say that the ultraviolet region spans 10 to 400 nm, then retinal absorption is in the UV, not the visible. However, "the absorbance spectrum of the chromophore depends on its interactions with the opsin protein to which it is bound; different opsins produce different absorbance spectra." From that page: 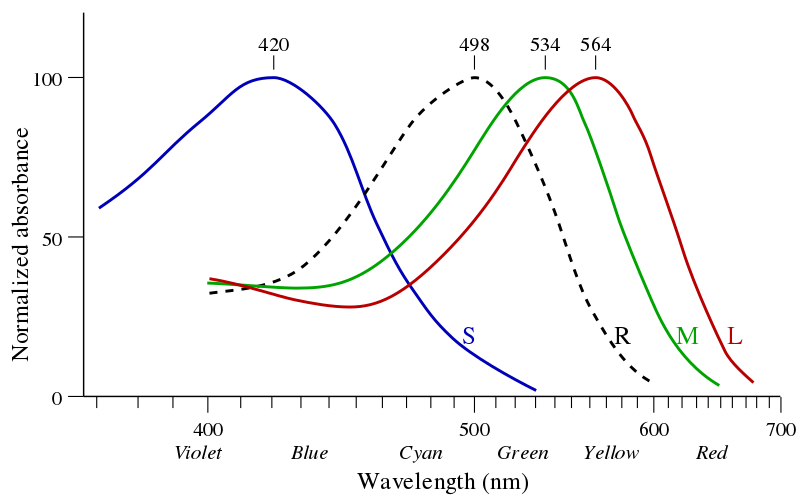 Regarding the mechanism of opsins as triggered by the photoisomerization,

The photoisomerization induces a conformational change in the opsin protein, causing the activation of the phototransduction cascade. The opsin remains insensitive to light in the trans form. It is regenerated by the replacement of the all-trans retinal by a newly synthesized 11-cis-retinal provided from the retinal epithelial cells. Opsins are functional while bound to either chromophore, with A2-bound opsin λmax being at a longer wavelength than A1-bound opsin.

The reason for the isomerization is that upon electronic excitation, the system can approach a point on the potential energy surface where two or more geometries are degenerate; this point is called a conical intersection. That is, after exciting 11-cis-retinal, certain internal rotation barriers are lowered in energy, the nuclei begin to respond, the system passes through a conical intersection, and further relaxation of the nuclei leads to all-trans-retinal. In general, photochemical processes are very complicated.

Not the answer you're looking for? Browse other questions tagged spectroscopy electrons ionization-energy electromagnetic-radiation or ask your own question.

14
Why does microwave heat up things so much more quickly than visible light?
5
Wavelength of iPhone 4S camera light for visible spectroscopy calibration
36
A compound that absorbs all visible light
1
"Exactly Equal" and "At Least" in electron excitation
7
Can gamma radiation cause transmutation?
1
Substances that pass visible light but absorb microwaves
1
When precessing nuclei absorb electromagnetic radiations, am I supposed to consider the wave nature or particle nature of light?
7
Confusion on light absorption by electrons
8
Visible Light Spectrophotometer Recommendations