Is there an energy cost associated with flipping the spin of an electron?

A common example used to illustrate the limitations of restricted Hartree-Fock (RHF) theory is the H$_2$ dissociation energy ($D_e$) curves. RHF enforces electrons to be paired into spin orbitals, $\chi$, or two spatial orbitals $\phi$ with the same set of spatial coordinates $\mathbf{r}$ but a different spin function (i.e. $\alpha$ or $\beta$ for spin-up $\uparrow$ and spin-down $\downarrow$, respectively). Unrestricted Hartree-Fock theory gives each spatial orbital its own set of coordinates, allowing for $\phi_1(\alpha$) to have a different energy than $\phi_1(\beta)$, giving rise to a proper description of the H$_2$ dissociation energy (see the graph below). I didn't include units in this graph but the energy is in kcal mol$^{-1}$. The red curve gives the appropriate (and approximate) $D_e$. The RHF formalism (blue curve) gives a $D_e$ that is three-times greater than the 'right answer'. 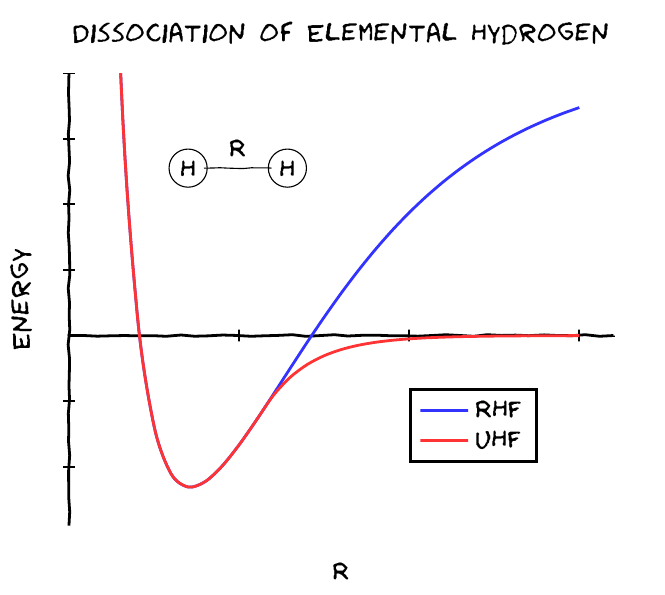 A corresponding electron configuration picture is shown below. Here we clearly see RHF forcing the electrons to be paired at infinite distances, giving rise to an H$^-$H$^+$ description of the system which is clearly wrong. (Note that this is a 'state' that included into the wave function by RHF). UHF allows the electrons to reside in their own spatial orbitals giving rise to two doublets at infinite separation.

Now here is where things get interesting. In terms of the actual computations implemented to generate the curves in Figure 1, the electrons adopt opposite spins. However, let us imagine a theoretical scenario where two lone hydrogen atoms are floating around in space at infinite distance. The corresponding electrons (which we will assume is not interacting with each other) can adopt any spin they want so both electrons can have a spin-up configuration. Now imagine these two hydrogen atoms approaching each other. For a covalent bond to form, the electrons will be paired into a spin-orbital which means that one electron must flip its spin according to the Pauli-Exclusion principle. (We should note at this point that orbitals are merely mathematical functions whereas spin is an actual physical property). This now leads us to...

Is there an energy cost associated with flipping the spin of an electron such as in the scenario I've described?

The obvious follow up question (if the answer is yes to the first piece), would the H$_2$ dissociation energy curves be different for two H atoms each with spin up electrons and two H atoms with electrons of opposite spin (and how different would they be)?

I will try to describe what happens when two hydrogen atoms approach each other from infinity. At infinite separation the hydrogen atoms don't feel their mutual presence and each atom has one electron localized in its atomic 1s orbital. In the absence of magnetic fields it will not matter whether the spins of the electrons are parallel or antiparallel and you will basically have an ensemble of systems with an equal amount of triplet (parallel spins, $S=1$) and singlet (antiparallel spins, $S=0$) states, since $E_{\uparrow \uparrow} = E_{\uparrow \downarrow}$. But when hydrogen atoms are brought closer together the situation changes: For one thing each atom has a magnetic moment associated with its electronic spin and there will be a dipolar interaction between those magnetic moments. However this dipolar interaction will be very weak (in the order of $10^{-4} \, \mathrm{eV}$ at close interatomic distance) and won't have much influence. Another factor that comes into the game is spin-orbit coupling. Yet again, since $\ce{H}$ is such a light element spin-orbit coupling will be very, very weak and so it can be ignored too. But the predominant factor to be taken into acount is the exchange energy (its effect is in the order of $0.1$ to $1 \, \mathrm{eV}$). Here you can find a very nice treatment of the exchange energy for the hydrogen molecule which comes to the conclusion that

For the hydrogen molecule the exchange energy is negative [...] so the state when the resultant spin is $S=0$ has the lower energy than the state when $S=1$.

This source also provides the potential energy curves for the hydrogen singlet and triplet states. 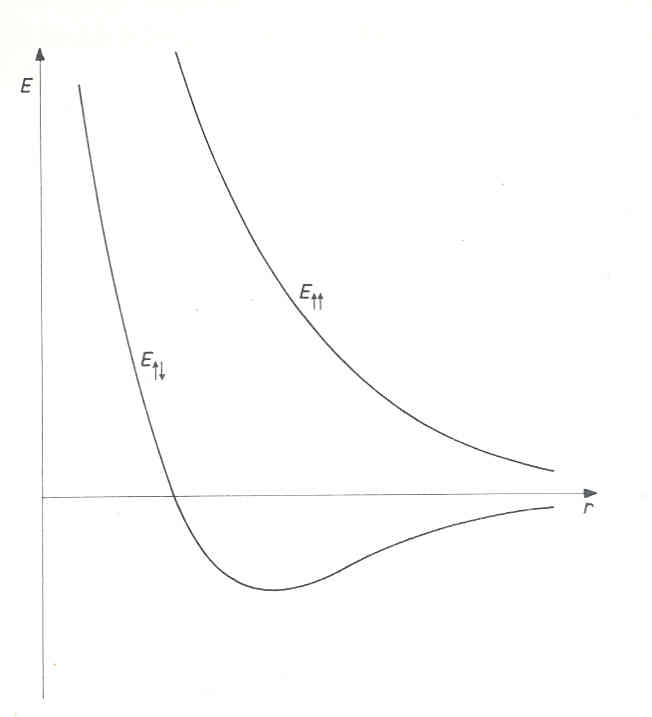 These curves amount to the following electron configuration diagrams: 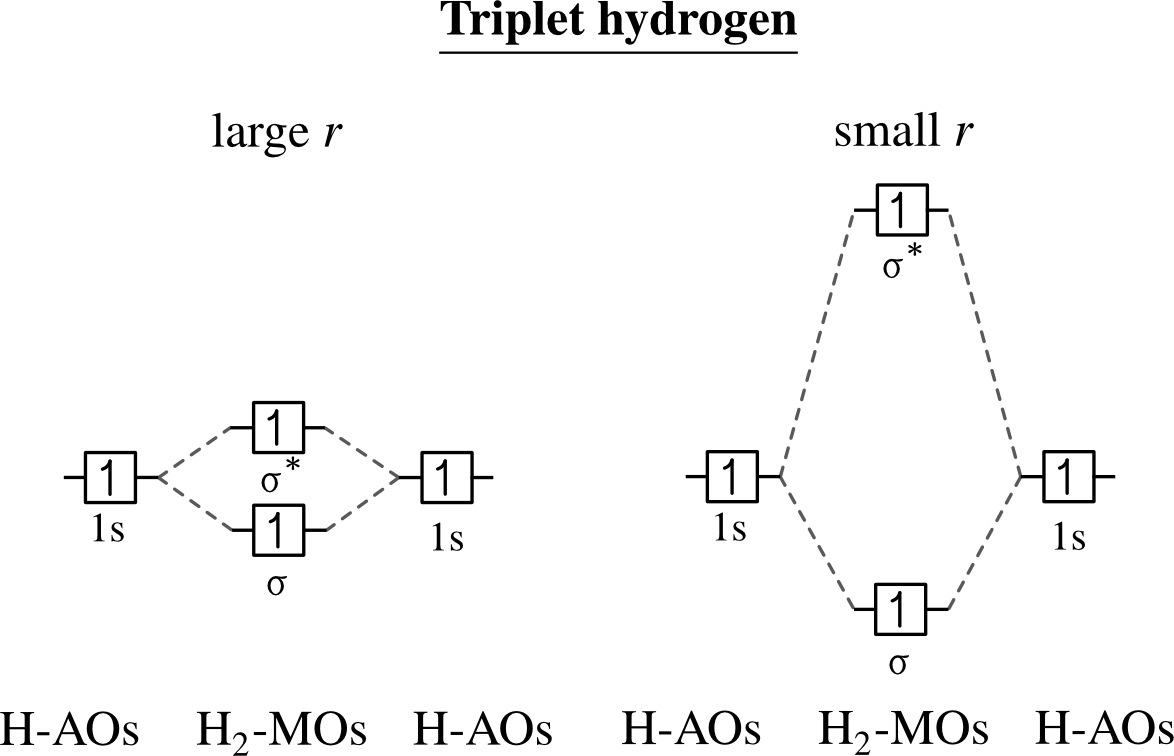 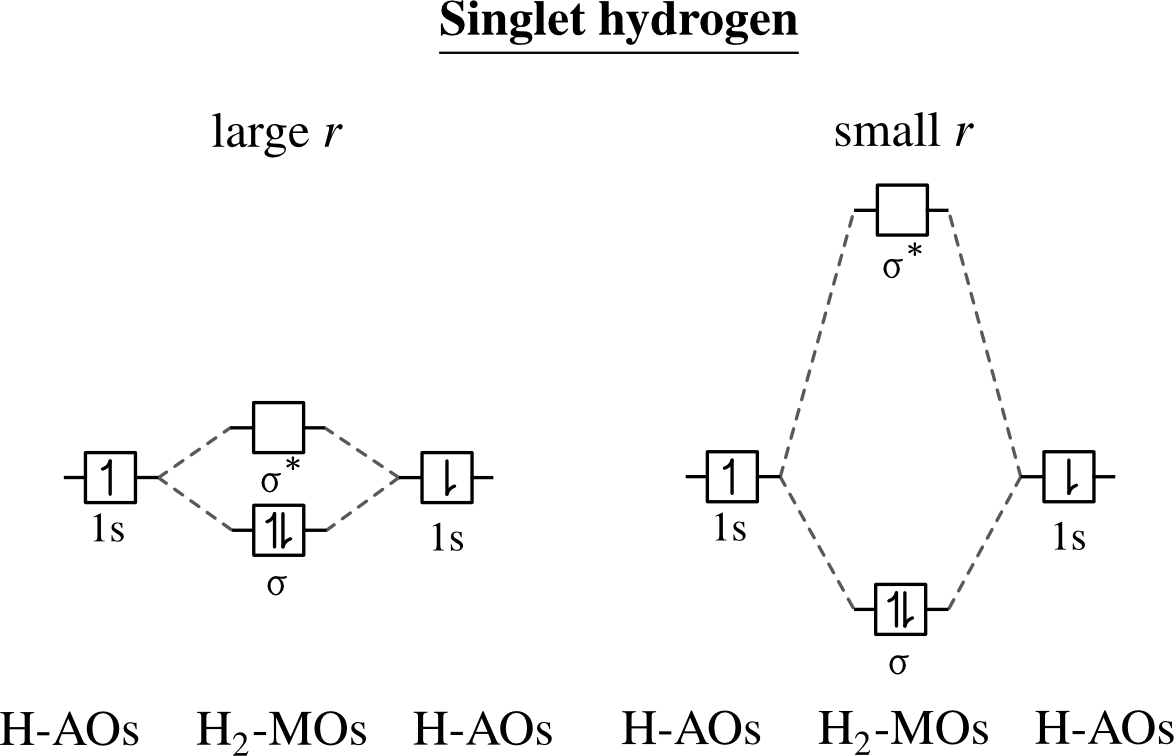 So, the situation for the approaching hydrogen atoms is like this: If both atoms start out with electrons of opposite spin (i.e. the system is in a singlet state) you have the common case that the hydrogen atoms will bond together thus lowering the total energy of the system. But if both atoms start out with parallel spins (i.e. the system is in a triplet state) the total energy will rise when they get closer to one another and the atoms will not bond together but keep their distance. This can be understood from the electron configuration diagram of the triplet hydrogen molecule: The antibonding $\sigma^{*}$ MO is more destabilized than the bonding $\sigma$ orbital is stabilized by the interaction (this is generally true for 2-orbital interactions) and the energy splitting becomes larger the closer the hydrogen atoms get. But because of the Pauli principle the two electrons of like spin in the system can't both occupy the $\sigma$ MO but one is forced to occupy the $\sigma^{*}$ MO and thus the system's total energy rises when the hydrogen atoms approach each other. And because there is virtually no spin-orbit coupling for hydrogen the total angular momentum (represented by $L$) and the total spin (represented by $S$) of the electrons are essentially conserved quantities and there is no mechanism to facilitate intersystem crossing, i.e. the process of changing from the triplet to the singlet state has such a low probability that it virtually doesn't happen. The situation changes of course if you add an external bias to the system, e.g. irradiation with high-energetic light. Then a triplet-singlet transition might be possible but as I read it that was not your question.

So, the way MO-diagrams are often pictured with electrons of like spin pairing up in a bonding MO does not reflect the "real" situation of two atoms approaching each other from an infinite distance. But it is not meant that way although it is often pictured as such.

So, in summary I established that if you have two hydrogen atoms in free space without spin-orbit coupling and relativistic effects they are stuck with the spin state they initially start out with and can't change it during their time evolution, i.e. they have to stay either on the triplet or the singlet Born-Oppenheimer surface and no switching between those is allowed. But I want to delve a little deeper into the reasons for it. If the hydrogen atoms wanted to change from triplet to singlet state, the atoms would have to transfer $1 \hbar$ of spin angular momentum somewhere else in order to comply with the law of conservation of momentum. In the absence of any particles to collide with the only possible mechanism by which this can be achieved is to emit a photon whose energy is equal to the energy difference between the triplet and the singlet state, i.e. $\Delta E = \hbar \omega = E_{\uparrow \uparrow} - E_{\uparrow \downarrow}$, and which would "carry away" the $1 \hbar$ of spin. But in order to emit a photon there must be a coupling between the electrons and the electromagnetic field. The magnitude of this coupling or in other words the probability for a transition from an initial to a final state under the emission of a photon is described by the transition dipole moment

where $q_{n}$ and $\mathbf{\hat{r}}_{n}$ are the charge and the position operator of the $n^{\mathrm{th}}$ particle in the system respectively, and the subscripts $\mathrm{i}$ and $\mathrm{f}$ signify the initial and final states of the transition. Under the conditions of the Born-Oppenheimer approximation the contribution of the nuclei to $\Theta_{\mathrm{i} \to \mathrm{f}}$ will be zero for the situation at hand, so that we only need to be concerned with the electrons in the system. If there is a sizable spin-orbit coupling then the spin degrees of freedom and the spatial degrees of freedom are coupled via the total angular momentum operator $\mathbf{\hat{J}} = \mathbf{\hat{L}} + \mathbf{\hat{S}}$ because

where $\langle \psi_{\mathrm{i}} (S) | \psi_{\mathrm{f}}(S) \rangle = 0$ because the initial state would be the triplet state ($S =1$) and the final state would be the singlet state ($S=0$) and spin wave functions for different $S$ are orthogonal. So, no spin-orbit coupling means that the probability for a transition from a triplet to a singlet state under the emission of a photon is zero.

In real atoms and molecules there is of course some spin-orbit coupling, so $\Theta_{\mathrm{i} \to \mathrm{f}}$ will be larger than zero. But the spin-orbit coupling in hydrogen is tiny and so $\Theta_{\mathrm{i} \to \mathrm{f}}$ will be tiny too and thus the probability of a triplet-singlet transition will be tiny as well and can be neglected for all practical purposes.

Not the answer you're looking for? Browse other questions tagged physical-chemistry computational-chemistry electronic-configuration quantum-chemistry or ask your own question.

21
Why is manganese(II) coloured although the transition should be spin-forbidden?
5
How long would it take for a tank of same-spin hydrogen atoms to become a tank of H₂?

11
Mathematically, how does the exchange integral for a closed-shell system reduce to zero?
4
Spin interaction term for a two-particle system of fermions with a potential that contains spin-spin interaction
13
Transforming AO basis electron repulsion integrals into molecular spin orbital basis?
2
Potential energy surface when spin changes
16
Why is an energy cost associated with splitting the HOMO spins in singlet oxygen?
6
Number of atomic and molecular orbitals in different Hartree-Fock references
5
Factorizing Slater determinant into product of spin-up and spin-down slater determinant
4
Can we relate approximate Hartree-Fock orbitals to true solutions in the basis-set limit?
1
Notation for orbital coefficient matrix in RHF vs UHF