why does ring flip of L-fructose occur? 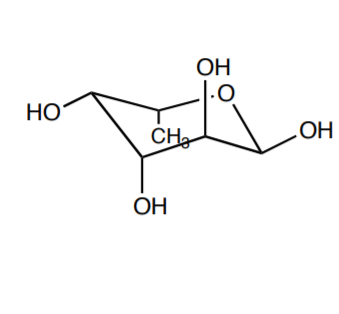 when drawing the chair conformation for beta-L-fructose, I got the structure above (in the picture). The answer said that the conformation above had a ring flip. Why does a ring flip occur and how can we tell when it occurs?

organic-chemistry biochemistry conformers
Share
Improve this question
asked May 23, 2018 at 6:10

These ring-flips are called 1C4-4C1 transitions and these happen to all of the pyranose sugars in solution when the conditions allow. However, the abundance of each forms depends on their energy. There is a so called 1,3-diaxial interaction between the axial substituents of a cyclohexane analogue. Two axial substituents on the same side are much closer than two equatorial substituens. If these substituents are relatively big, it will be energetically unfavorable to bring them close together due to steric effects. Therefore the molecule will "choose" the conformation that has less energy, so less "large" substituents on the same side. In your case the OH and Me groups are considered the "large" substituents, while the H atoms (undrawn) are the "small" ones. Therefore the conformation you drawn has an unfavorable Me-OH interaction, which will drive the conformation change from 4C1 to 1C4.

Molecules vibrate and twist all the time, the energy they have is more than just zero point energy because they in a 'heat bath' of other molecules at, say, room temperature. In the case of (non-aromatic) rings such as fructose or cyclohexane the activation energy needed to move from the chair to the boat form is not much greater than normal thermal energy so both these forms co-exist in equilibrium with one another but with the chair being favoured do to lower steric interaction as described in the answer by @fasekaszs. The ring strain is particularly small in 6 membered rings.

Not the answer you're looking for? Browse other questions tagged organic-chemistry biochemistry conformers or ask your own question.

6
Which cyclohexane conformation is more stable?
19
Multiplet shape in proton NMR of morpholines
0
Conformations of cyclohexane and flipping
28
Why is cyclooctateraene shaped like a "tub" rather than a "chair"?
2
Is there a gauche interaction between C-3 and C-6 in cyclohexane?
4
Why and how does ring expansion occur in the dehydration of (cyclobut-3-ene-1,2-diyl)dimethanol?
7
Is there any specific conditions for Neighbouring group participation?