Why is filter paper fluorescent?

Typical filter paper used in chemistry lab (e.g. Whatman #1) exhibits autofluorescence in near UV with excitation maximum at 365 nm and emission maximum at 440 nm. It was reported in literature1 that fluorophores from filter paper can be extracted by PBS buffer in wide range of pH, and thus they are at least partially soluble in water. However, cellulose, the major component of filter paper, is not fluorescent in this wavelengths range and is insoluble.

What is the source of filter paper fluorescence? I assume it comes from paper pretreatment and bleaching, but what is chemical identity of fluorescent compounds in it?

In the production of white paper, the bleached pulp is often treated with optical brightening additives (OBA), that absorb in the uv and emit in the blue range. If I remember correctly, a typical example is 4,4'-diaminostilbene-2,2'-disulfonic acid.

Here's an article from The Open Textile journal (OA) in which the compound mentioned above is used as a starting material in the synthesis of another optical brightener for textiles.

I asked this question when looking for background information for one of my PhD projects and I gained a lot of insight since, which I wanted to share. If you are interested, the project outcome was published recently$^1$. In short - autofluorescence of filter paper originates both from OBAs as well as from cellulose fibrils itself.

There is several sources of fluorescence in papers and other lignocellulosic materials including both optical brightening additives (OBA) as @Klaus pointed out as well as cellulose itself. In case of biomass, lignin is another strongly fluorescent component, that is however removed in manufacturing process of paper.

There exist few earlier literature accounts proving that pure cellulose itself exhibits weak near UV fluorescence, including this paper by Olmstead and Gray$^2$. Here Emission spectra of various cellulose samples at $\lambda_{ex}=320$ nm was recorded (Fig. 1). Bacterial cellulose is know to be fully lignin-free, so there is no doubt that the spectra comes from cellulose fibrils themselves. 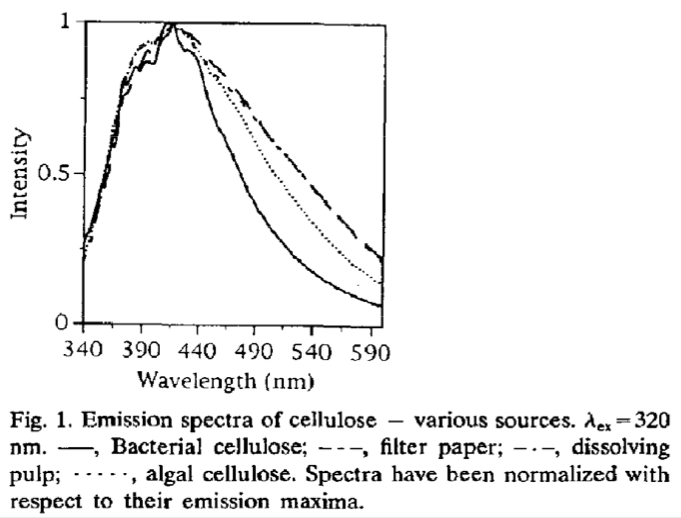 The absorbance spectrum of multi-component biomass materials is more complicated. I measured the Raman spectra of filter paper and two unbleached biomass samples and confirmed the cellulose was present in all of them (Fig. 2C). Lignin was absent in filter paper, but present in biomass samples. Next, I performed excitation/emission autofluorescence spectral scans of same samples in UV-VIS range (Fig. 2D). I found dominant peak at 360/420 $\lambda_{ex} / \lambda_{em}$ present in all specimen that can only be attributed to cellulose. Filter paper had a a few more sharp fluorescence peaks at lower wavelengths, absent in unbleached biomass, that I attributed to OBAs. Biomass sampled exhibited a broad peak shoulder at higher wavelengths that originates from lignin and was absent in delignified filter paper. 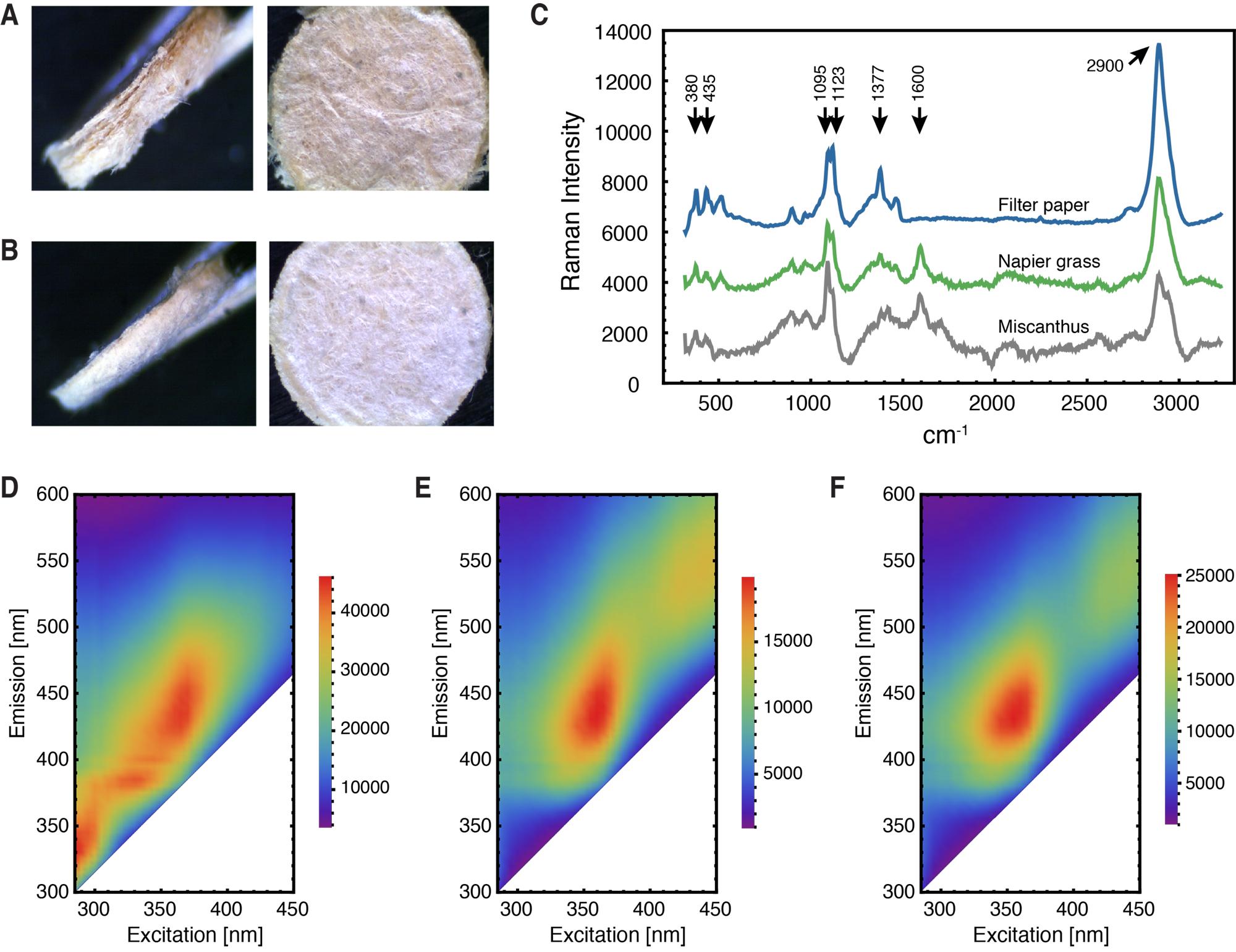 One question I was unable to answer is what is the molecular origin of cellulose fluorescence ? The origin of lignin fluorescence is well understood $^{3,4}$, with distinct fluorophores formed by aromatic moieties in lignocellulose structure. Cellulose, on the other hand, does not have an aromatic character. I came across a hypothesis that fluorophores are formed when glucose rings in cellulose chains interact with each other via van der Waals and stacking interactions forming cellulose nanocrystals. That would suggest that purely amorphous cellulose should not be fluorescent. I was, however, unable to find studies on that topic.

You might want to check out the following links:

The first is a paper that reports on the fluorescence/phosphorescence of carbohydrates, whilst the others are all reviews that at least discuss compounds that are luminescent upon aggregation and possible reasons why the phenomena occurs.

I realise that I'm a few years too late here, but hope it as of interest to anyone that comes across this thread (as I did) when trying to understand the phenomena!

Not the answer you're looking for? Browse other questions tagged analytical-chemistry spectroscopy photochemistry experimental-chemistry or ask your own question.