Mechanism of formation of 2-naphthol red dye (aka Sudan 1) 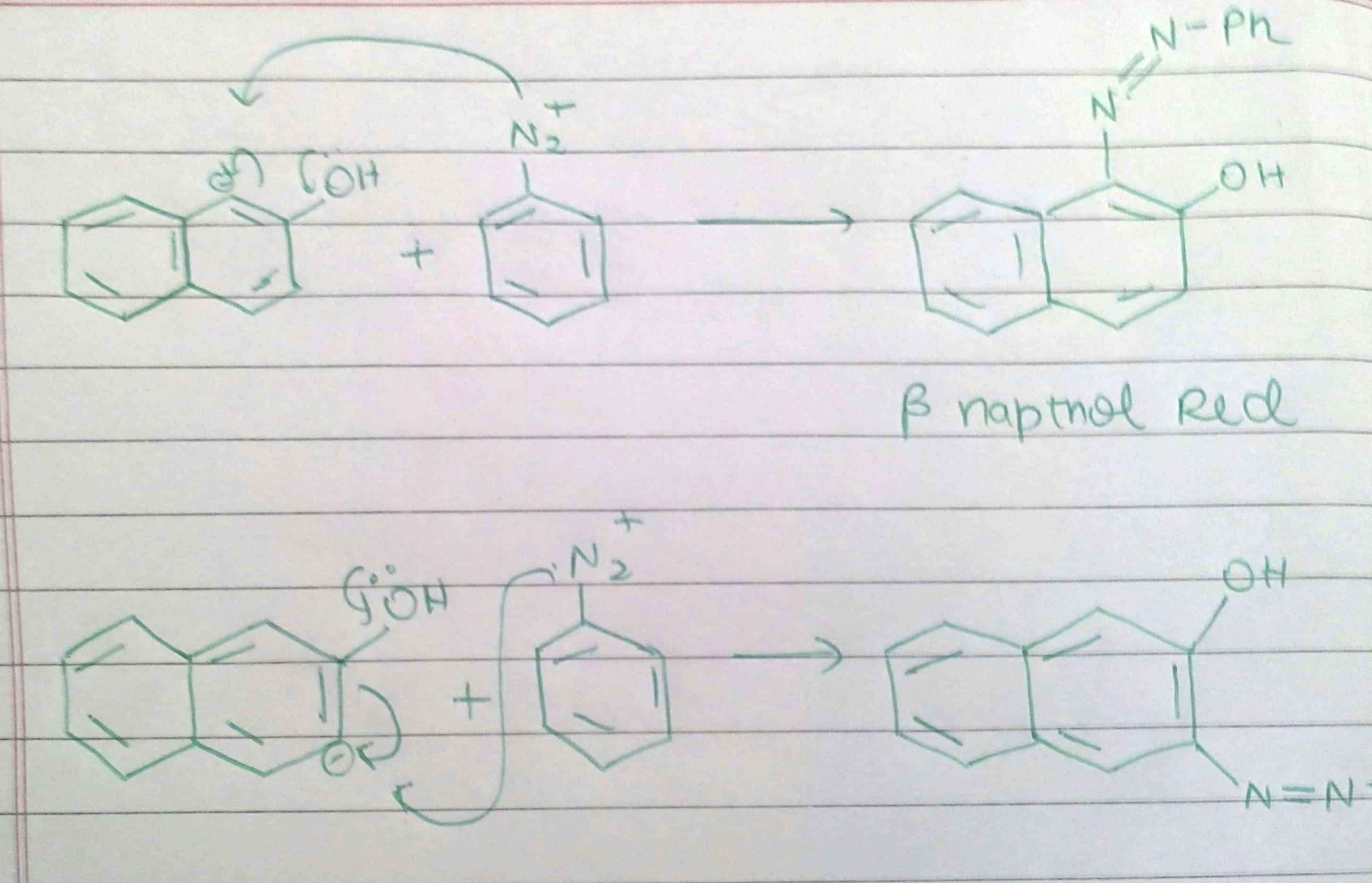 As you can see in the image diazonium can attack at 2 different positions to form different products then why only the first product is correct? As there are two ortho positions available why does it attack only one? 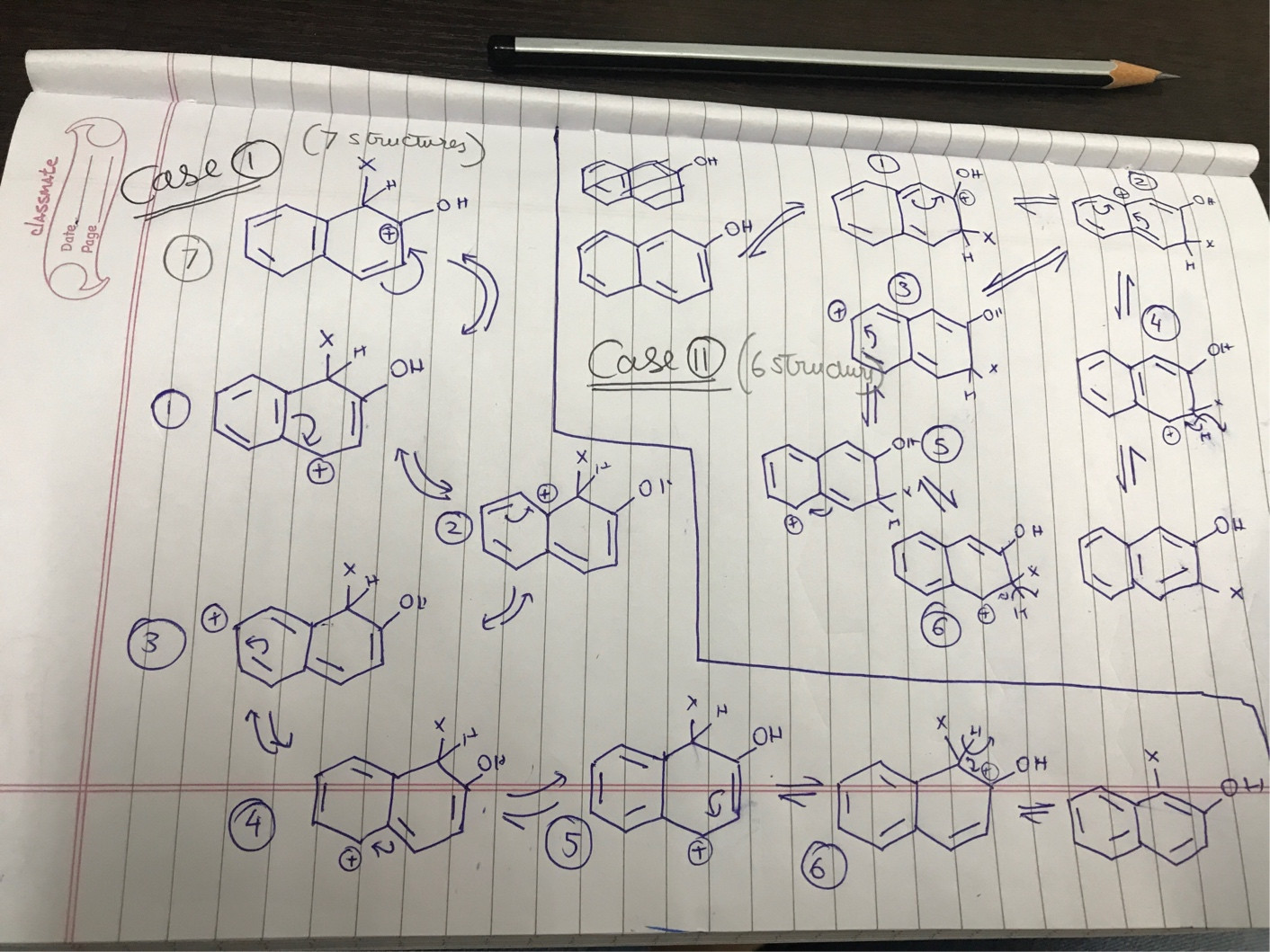 is it because there are 7 intermediates in the first case? or steric factors play some role here?

organic-chemistry reaction-mechanism dye
Share
Improve this question
edited May 26 '18 at 6:09

The most important thing to point out here is that your arrows are backwards. The diazonium is not the nucleophile. It is the electrophile. The diazonium ion has one lone pair. If it were a nucleophile, there's no way that you'd end up with the diazo compounds drawn, where each nitrogen has a lone pair.

This also means that drawing out all of your resonance structures doesn't mean anything because that is not the intermediate. The real question to ask here is which site on the naphthol ring is more nucleophilic.

Consider the naphthol as an enol for the purposes of the addition. Your two starting structures are exactly the right ones for focus one. The unsaturation in the enol in the top example is such that the nucleophilic site is benzylic while, in the other case, it is far from the ring. 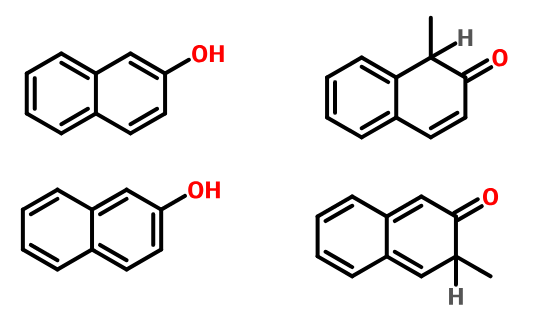 The intermediates after attack by an electrophile are shown (technically, the carbonyls should be protonated still, but I'm too busy to fix that now). Only in the top case, where we substitute adjacent to the other ring, is aromaticity still preserved in the other ring. This is why the substitution is strongly preferred there as opposed to the other position, where we proceed via an intermediate that is not aromatic.

The formation of para-red is an example of electrophilic aromatic substitution. The electrophile reacts with the ring carbon that is ortho to both the activating group ($\ce{-OH}$) and the other ring because even the ring is weakly activating through $\text{+M}$ effect.

The reaction is similar to the sulfonation of napthalene. If the electrophile attacks the first ortho position, then for the resulting carbocation two resonance structures can be drawn which contain aromatic sextets. On the other hand if the electrophile attacks the second ortho position, only one resonance structure can be drawn which has an aromatic sextet.

Thus, by the Hammond postulate, the first product is major.

Not the answer you're looking for? Browse other questions tagged organic-chemistry reaction-mechanism dye or ask your own question.

5
Why does the -OH group in β-naphthol direct the incoming diazonium salt towards the ortho position?
2
Why does Azo coupling of β-naphthol takes place at alpha position and not at gamma position
23
Thermodynamic vs Kinetic Sulphonation of Naphthalene
1
Can anyone please help me how do you determine kinetically the fastest product of sulphonation of $\beta$ napthol?
0
Diazo coupling of α-naphthol

4
Why does diazo coupling preferentially occur at the para position?
2
Stereochemical aspect of heating of cyclohexane-1,2-diol
3
Regioselectivity in nitration of a 1,2-disubstituted aromatic compound
3
How to make p-chloroanisole from methanol and benzene?
0
Electrophilic halogenation of 4-halo-3-(tert-butyl)phenols
10
What is the directive influence of the tert-butyl group in electrophilic aromatic substitution?
5
Most activated position for Electrophilic addition in substituted biphenyls
1
Can anyone please help me how do you determine kinetically the fastest product of sulphonation of $\beta$ napthol?