Reactivity of meta- and para-bromo-nitrobenzene towards nucleophilic substitution

Among 1-bromo-3-nitrobenzene and 1-bromo-4-nitrobenzene, which would be more reactive towards nucleophilic substitution?

From what I can infer, the answer should have been 1-bromo-3-nitrobenzene. Nitro is a −M/−R group, so it would create regions of high positive charge in the ortho and para positions with respect to the nitro group.

But the answer given in my book is 1-bromo-4-nitrobenzene. Am I missing something here?

p- Bromonitrobenzene is certainly more reactive towards Nucleophilic Substitution than m-Bromonitrobenzene. The reasons are as follows,
Firstly, due to $-R$ effect of $\ce{NO2}$ group, the positive charge is created on the carbon attached to bromine in para position, which helps to increase thre electrophilicity of that carbon and that makes easier for the electrophiles to attack the benzene ring. If $\ce{NO_2}$ group would have been in meta position, the positive charge would have been created on the adjacent carbon, so, the electrophilicity of the bromine attached carbon is not increased so much which in turn will not help it to undergo Nucleophilic attack easily. The image below demonstrates this effect on para position. 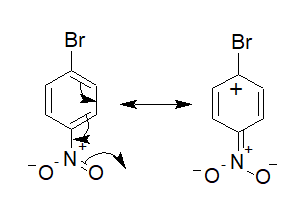 Secondly, the Nucleophilic substitution in these systems undergo by addition-elimination mechanism. So, when the nucleophile attacks and forms the intermidiate complex, that complex is much more stabilised due to charge delocalisation in the $\ce{NO2 }$ group also if it is in para position.

But if $\ce{NO2}$ is in meta position, the charge can only delocalise in the ring, but it can not delocalise in the $\ce{NO2}$ group (you can verify by looking at the image also), so it is not so stabilised as the para isomer intermidiate.
These effects are mainly dominating which makes the p-Bromonitrobenzene more reactive than m-Bromonitrobenzene in Nucleophilic substitution.

The mechanism generally followed in nucleophilic aromatic substitution when an activating group (like $\ce{-NO2}$) is present on the ring is SNAr.

The first step, the formation of the carbanion, is usually the rate determining step.

You are aware that the nitro group has a strong -I effect as well as -M effect. Out of these, the -I effect can operate in both the isomers of nitrobromobenzene. However, the -M effect can only operate in the para isomer. (Draw the resonance structures and verify)

Thus, the carbanion formed in the case of p-isomer can be stabilised by two effects, taking full advantage of the presence of the nitro group which makes it more reactive towards nucleophilic substitution.

Not the answer you're looking for? Browse other questions tagged organic-chemistry aromatic-compounds halides nucleophilic-substitution or ask your own question.