CO2 has sp hybridization and no lone pairs on carbon. 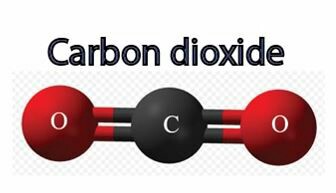 For some reason calculation with VSEPR gave sp2 hybridization and lone pair on carbon.

The carbon atom in $CO_2$ has zero lone pairs of nonbonding electrons.

[By the way, the carbon has $sp$ hybridization, as it requires the bonding orbitals to have the same lobe sign on each side to make two identical $\sigma$ bonds. The $2p_z$ orbital alone is not sufficient to make two identical bonds, because the molecule would then lose the reflection symmetry it ought to have.]

Let's construct the Lewis structure ourselves:

Therefore, the total number of valence electrons is $4+6+6=16$. Carbon is the larger atom, so this is a more usual structure with the largest atom in the center. The skeletal structure so far is:

We place three lone pairs of electrons on each oxygen next, to account for $2+2$ bonding and $2\times3+2\times3=12$ (currently) nonbonding electrons, for a total of $16$ as we needed.

Lastly, we use one lone pair from each oxygen to make a $\pi$ bond. This only redistributes electrons, without adding any extra or losing any. That results in:

And are the formal charges (FCs) minimized?

This must be the actual Lewis structure, and it also is in the correct image you have placed in your question.

0
Identifying the number of bonding and lone pairs without a dot and cross diagram
0
why do we call lone *pairs*?
39
Are the lone pairs in water equivalent?
1
Is the VSEPR theory correct in determining the bond angle of sulfur dioxide?
4
What is the CNC bond angle in methyl isothiocyanate?