Why does having equivalent resonance structures give more stability?

One important thing to know is that what we call "resonance structure" is a byproduct of our chemical notation which can't describe the structure of some compounds effectively using only one chemical structure. Personally I find the old term mesomeric structure more appropriate (meso- Greek mésos in the middle; -merism from Gk. merismos "dividing, partition") because resonance is already used for a phenomena, a real phenomena, in physics that has nothing to do with resonance in chemistry. Furthermore the compound is not continuously changing it's structure between the possible resonance structures, like the term resonance seems to suggest, but is a "normal steady" compound that simply has an electron distribution that cannot be described with a single chemical structure.

Why does having equivalent resonating structures give more stability?

Here the electrons are equally distributed (delocalized) between the two oxygen atoms.

However for some compounds the real structure is not always a structure right in the middle between the different resonance structures; the first assumption is true only if the two structures are two equivalent structures. So it can occur that the electrons are not well delocalized between all the atoms hence the resonance energy is lower and so the overall stability.

In the case of phenolate ion I think the first structure in the figure [2] gives a greater contribution to the final structure of the phenolate ion so the electrons are not well delocalized, but if I'm not wrong are mainly in the oxygen atom. Unfortunately I can't find the energy of the different resonance structures.

Finally, however, I think that you should study case by case if the number of the resonance structures or their contributions are determinant to the overall resonance energy taking into account valency and electronegativity of the atoms involved.

I would like to give a very rough answer as to why equivalent resonance structures have a stabilizing effect.

To begin, we assume that resonance can be represented as a discrete n-state system. Feynman has used this simple approximation to explain many of the essential features of chemical bonding and resonance in the Feynman Lectures on Physics Vol III, Chapters 8 - 10.

To simplify we begin with a molecule which can have 2 different canonical structure based on the usual rules. Let the energies of the two states be $E_1$ and $E_2$ .

We assume that the new eigen states however can be represented as a superposition of the 'old' states.

We find the energy eigenvalues from this matrix.

The energy eigenvalue with the lower energy in this case is:

This $D$ is a measure of the stabilization due to resonance.

The graph of this function is: 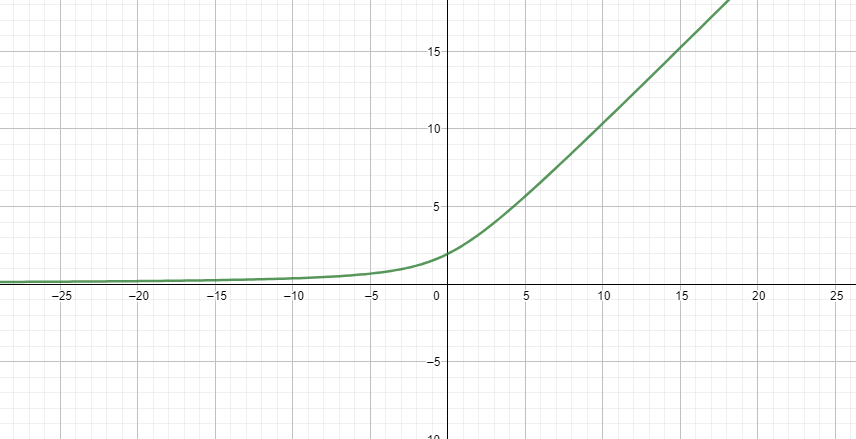 However one should be careful of the comparison being made here. We are not comparing the molecule to some other molecule. All that is said here is that the stabilization of the molecule due to resonance is maximum when the canonical structures are equivalent (for a 2-state system).

I don't think the statement is true in this general form. It is always possible to make mesomeric structures a little bit less equivalent (for instance, through isotope-labeling of one of the oxygen atoms in acetate). This does not change the acidity of acetic acid much.

To give another example, we can compare the acidity of propene, acetaldehyde and formic acid. When you remove a proton from each of these, you get three anions that have multiple mesomeric structures. 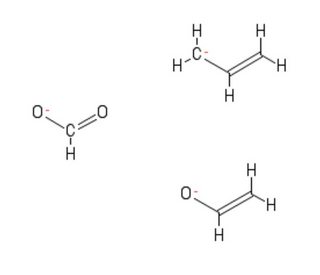 The ones for propene and formic acid are symmetric, the one for acetaldehyde is not. Formic acid is most acidic, followed by acetaldehyde with propene least acidic. I would observe that for formate, the negative charge is assigned to oxygen for both mesomeric structures whereas for the deprotonated propene, it is assigned to a carbon atom. The enolate anion has the charge on oxygen for the more significant mesomeric structure (shown) and on carbon for the less significant one (not shown).

For phenolate, the large number of mesomeric structures is less relevant because the ones with the charges assigned to oxygen are the most significant (the only ones that don't force us to write a structure lacking alternate double bonds in the benzene ring).

You can estimate stability by the number of resonance structures you can draw. For the acetate ion, there are 2 resonance structures, while for the protonated form (acetic acid) only one structure is possible, which favors deprotonation. For the phenolate ion, you can formulate 4 structures, with the negative charge delocalized into the benzene ring. For phenol, you can draw 4 structures as well, although 3 of them have a positive formal charge at the oxygen. This is why phenol is weakly acidic, and quite acidic for an alcohol.

Edit: The content of this post can also help understanding the different acidities of phenol and acetic acid: Why is ethanoic acid more acidic than phenol?

25
Why is acetic acid more acidic than phenol?
2
Stability and resonance structures
1
Determining the order of basicity of acetate, phenoxide, hydroperoxide, and hydroxide ions
2
Why does having equivalent resonance structures give more stability (Related)?
-1
Why is oxygen sp2 hybridised in acetate ion