The effect of the groups at para position on SN2 reactivity

Compare the SN2 reactivity order for:

The benzyl group stabilises the transition state of SN2 reaction using the π system of the benzene ring for conjugation with the p- orbital of the electrophilic carbon which is electron deficient. (reference: Clayden, page 341)

So in my opinion, groups increasing the electron density of the ring should make the SN2 reaction go faster as compared to groups decreasing it.

Thus the order should be $2 > 3 > 1 > 4$ but the answer given in my worksheet is the exact opposite of this. I would like to know the reason for that and the flaw in my reasoning.

This is what I found in March:

Holtz and Stock showed that electron-withdrawing groups increase the rate of SN2 reactions. This can be ascribed to stabilization of the transition state by withdrawal of some of the electron density.

I find this contradictory to the content given in Clayden that the TS is "electron deficient". In March its also given that for alkyl groups at para position the Baker Nathan order is followed (methyl > ethyl > t-butyl). (Hyperconjugation is most in methyl so it increases electron density of the ring) (Another apparent contradiction)

So how exactly do I determine the effect of the p-substituents in SN2. 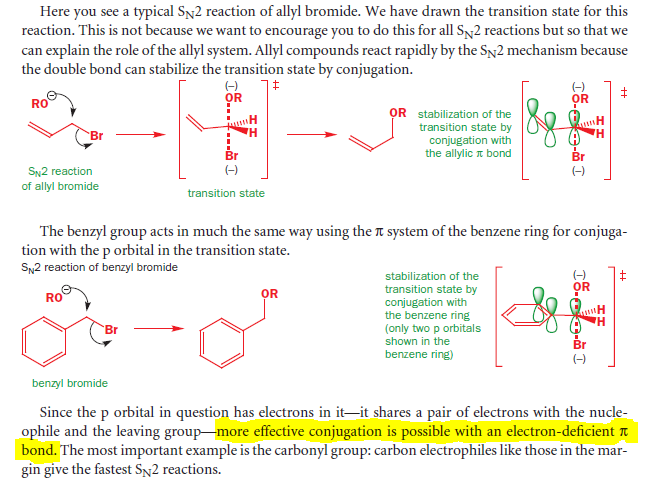 This is what I found from your reference to Clayden. You just had to read the next paragraph ( I have highlighted the point ). You can see that March and Clayden have agreed on the same point, that electron withdrawl from the phenyl/allyl group increases the effective conjugation in the transition state. So I hope You can understand what will be the correct order and why.

P.S. I know this question is old, but it was unanswered, and someone may benefit from an answer.

51
Regioselectivity of acid-catalyzed ring-opening of epoxides
22
How are SN2 transition states stabilised by adjacent double bonds and carbonyl groups?
28
Explanation for the trends in nucleophilicity—Orbital interactions or electrostatic attraction
1
Reactivity of meta- and para-bromo-nitrobenzene towards nucleophilic substitution
8
Claisen rearrangement in substituted ring
1
Arrange in the order of their reactivity of SN2 reaction