Understanding the synthesis of twistane [closed]

What are the products P and Q?

This was a question in my test series, but I don't have any experience with bridge head compound regarding the cis and trans transformation. I need help understanding this process.

The first step is a conversion of the nitrile into a carboxylic acid, in the literature Martin Olbrich, Peter Mayer, and Dirk Trauner (J. Org. Chem., 2015, 80, 2042-2055) used KOH in ethylene glycol at 155 oC for a couple of hours. The next reaction is attack of iodine on the alkene. The cyclic cationic intermidate will be attacked by the carboxylic acid.

I am not sure what SBH is, but it is some reducing agent which functions in the same way as hydrogen with platinium and a base. This combination of reagents removes the iodine by converting the alkyl halide into a sp3 CH. This gives us P.

Another option I would consider is to use nickel chemistry, I would put some hydrated nickel(II) chloride in a flask with ethanol, I would then add a solution of sodium borohydride in water. Do this with care as it emitts a lot of hydrogen gas. It will change the nickel solution from a nice green clear solution to an ugly black slurry. This is not a problem. Add the organic material to this. This black slurry acts like raney nickel. I have used it a few times to remove things like thioether groups from aromatics. For example if you react 2-acetyl pyridine with a base and carbon disulfide and methyl iodide you can make a new compound. If this is then reacted with 2-acetyl pyridine and base, before being boiled up with ammonium acetate in acetic acid you can form terpy with a SMe group on the 4 position of the central pyridine ring. The way to convert this SMe version of terpy to terpy is to boil it with the black slurry made from nickel and sodium borohydride. The problem is that it is hard to do oxidative addition of alkyl halides, many reagents do not work well.

If we consider the Monsanto process for acetic acid then the rate determining step is the reaction of the methyl iodide with the rhodium, if we move to the more modern BP version which uses iridium then the oxidative addition is much more easy. I think that the platinum catylst will work a lot lot better than either the nickel method I mentioned or palladium on carbon.

I worry that sodium borohydride with no modification will be unable to deal with the alkyl iodide in the moelcule.

Another option would be to use tributyl tin hydride and AIBN, this is a selective radical based reducing agent which will convert alkyl iodides into alkyl hydrides (alkanes) without touching alcohols, esters or other carboxylic acid based groups. This could be a method of putting a deuterium label into the product if we very much wanted it.

Now a lot of people hate tributyl tin chemistry, there are several disadvantages of it. Firstly it is often hard to separate the tributyl tin side products from the product. Secondly organo tin chemistry is rather toxic, the worst effects are on marine life such as oysters. Tributyl tin compounds can cause female marine organisms to turn into an intersex creature which then dies. But in our case it is not so bad. What we can do is to use a tributyl tin reducing agent and the use the acid base properties of the carboxylic acid to separate it from the neutral tributyl tin iodide.

The next thing is that we use aqueous caustic potash to break open the lactone ring. The lactone is then oxidised with permanganate. I would have used a chromium oxidant as they tend to be a little more gentle. 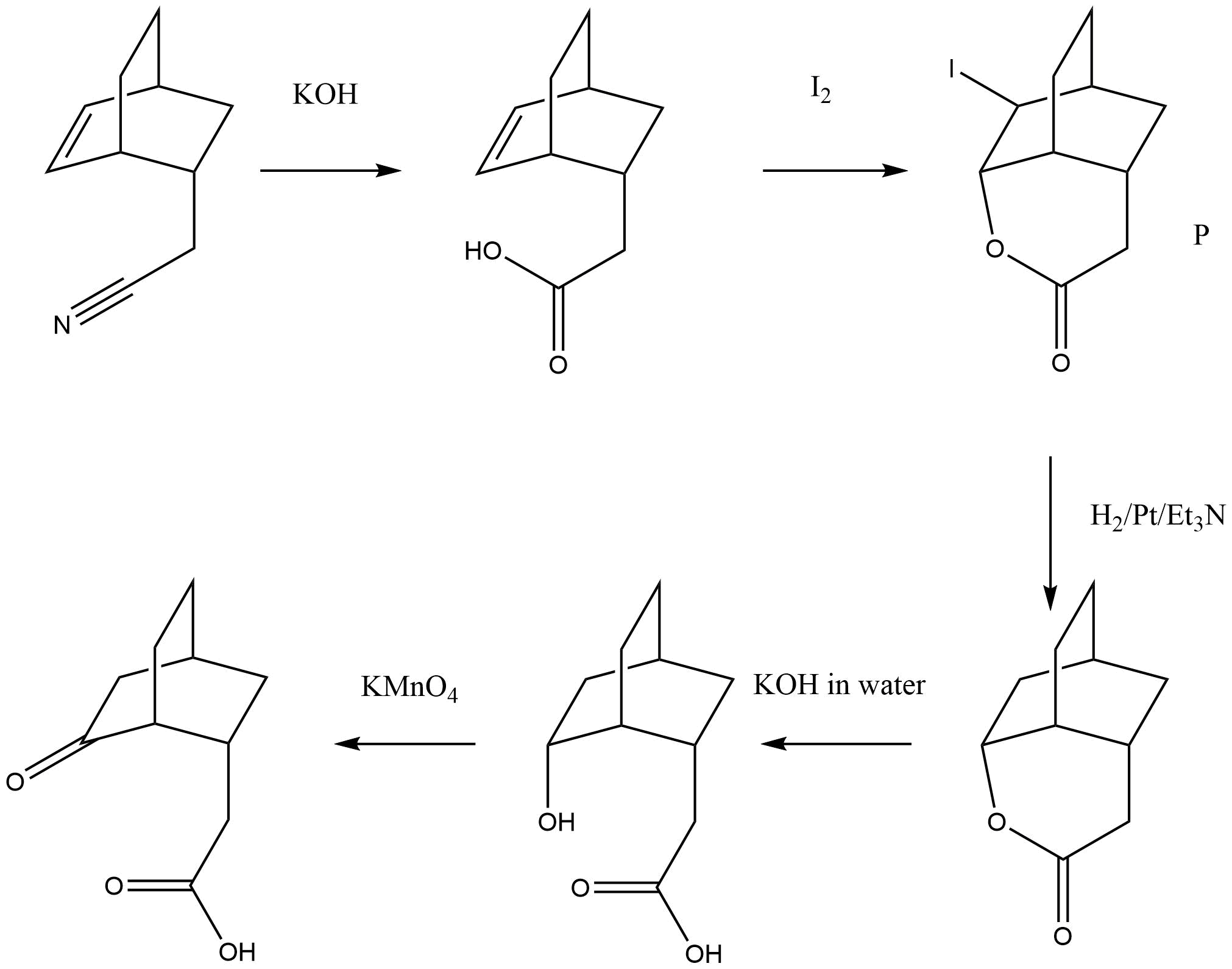 Next we react the ketone with ethylene glycol using acid and some dehydration method. One good method is to use toluene and a dean-stark head. Another one which I like is to use triethyl ortho formate with a little acid. This triethyl orthoformate method works under more gentle conditions to remove the water. We might get some ester formation but in the ideal world I would want to do the next step with an ester not a carboxylic acid.

We reduce the carboxylic acid using the cyclic acetal to protect the ketone from the lithium aluminium hydride. Then using acid in water we deprotect the ketone. We then convert the alcohol into a leaving group with tosyl chloride. We then form an enolate with the LDA which then will attack the tosylate to form the ketone.

It is important to keep in mind that under some conditons that enolates can be attacked on the oxygen by hard electrophiles such as tosylates. But I suspect in this case that the tosylate will be unable to reach the oxygen. It would be best to run this reaction at a high dilution. One method would be to slowly add the ketone-tosylate to a large flask containing a large amount of solvent and some LDA. Another method would be to convert the tosylate to the alkyl iodide by reacting the tosylate in acetone with sodium iodide first. 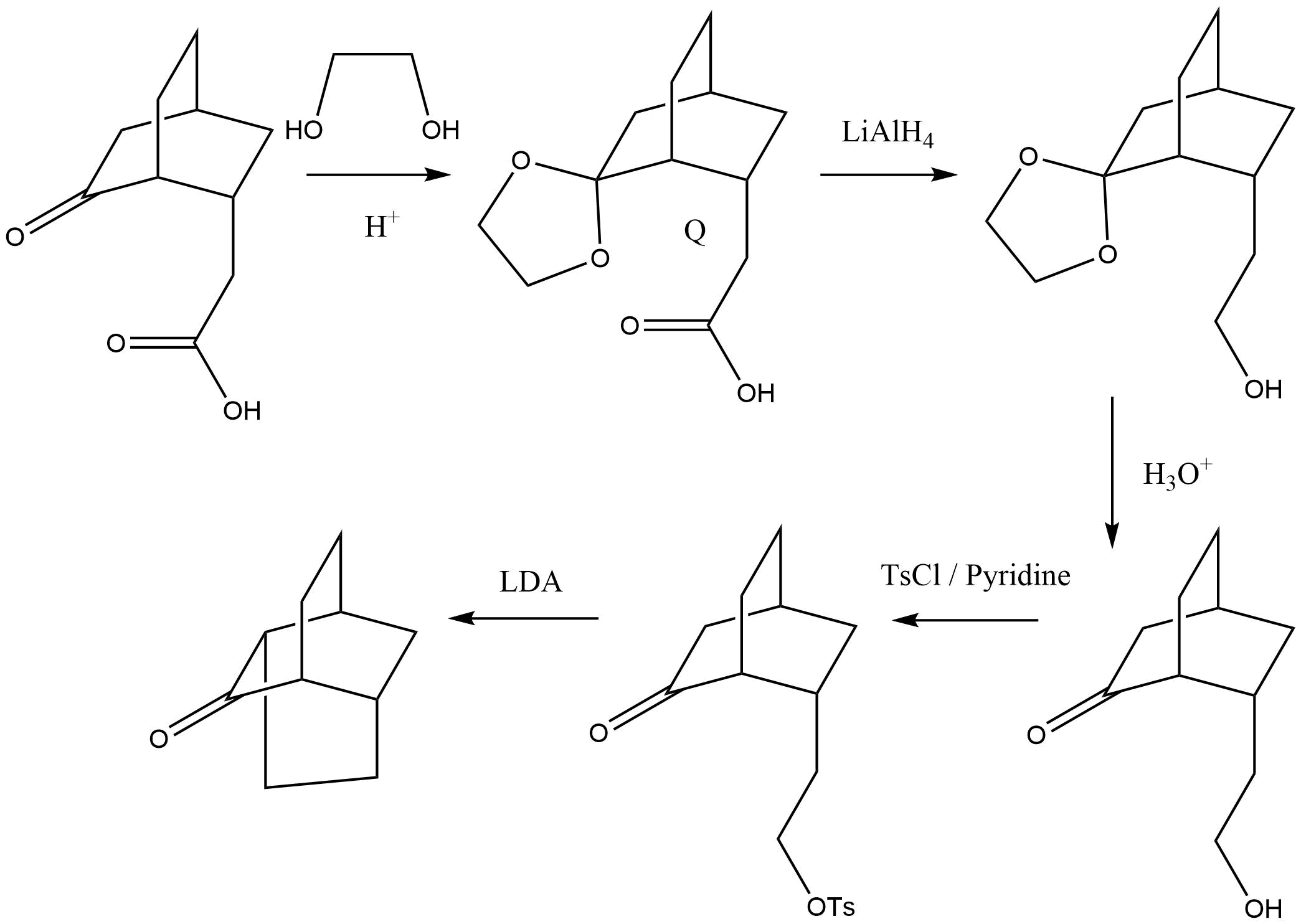 4
How to identify an unknown compound with spectroscopic data?
2
What are the common products of the reaction: 2-bromobutane and NaOH
0
Do processes involving synthesis need heat?
4
Why does d/l-2,3-dibromobutane on reaction with NaI/acetone give cis-2-butene?
9
How do you name this compound using IUPAC system (including steps)?
0
What method do I use to synthesize propyl-2-(2-methylpropyl)-ether and why?
2
Keto-enol tautomerism in a bicyclo compound