In the book by Clayden they have drawn a diagram with the electron deficient dienophile lower in energy and saying that it would prefer to give its LUMO to the reaction.

But, I don't get what's wrong with an electron-rich dienophile lending its HOMO.

organic-chemistry pericyclic
Share
Improve this question
edited May 27, 2018 at 3:27

Inverse electron demand reactions are inefficient and slow. Even the prototypical Diels-Alder reaction of 1,3-butadiene and ethylene is quite sluggish. From here you can see the reaction only proceeds to 93.5% yield when ran with ethylene in excess by 50:1 at 200ºC and 350 atm for 4 hours. Yikes!

Now consider that some normal electron demand D-A reactions can occur at room temperature. In fact, 1,3-butadiene spontaneously dimerizes to 4-vinylcyclohexene while in storage, meaning the dimer must be cracked by heating immediately before use. This should give you an idea of the sensitivity of D-A reactions to substituent groups. By lowering the HOMO-LUMO gap, orbital overlap is improved, lowering the activation energy and resulting in a faster reaction.

To supplement and support my answer, here is a paraphrased excerpt from Modern Physical Organic Chemistry by Anslyn and Dougherty (2006):

Electron-withdrawing groups on the dienophile lower its LUMO. This occurs because electronegative substituents have correspondingly lower energy MOs, and lower the energies of all MOs in which they participate. Inversely, electron-donating groups raise the diene MOs. 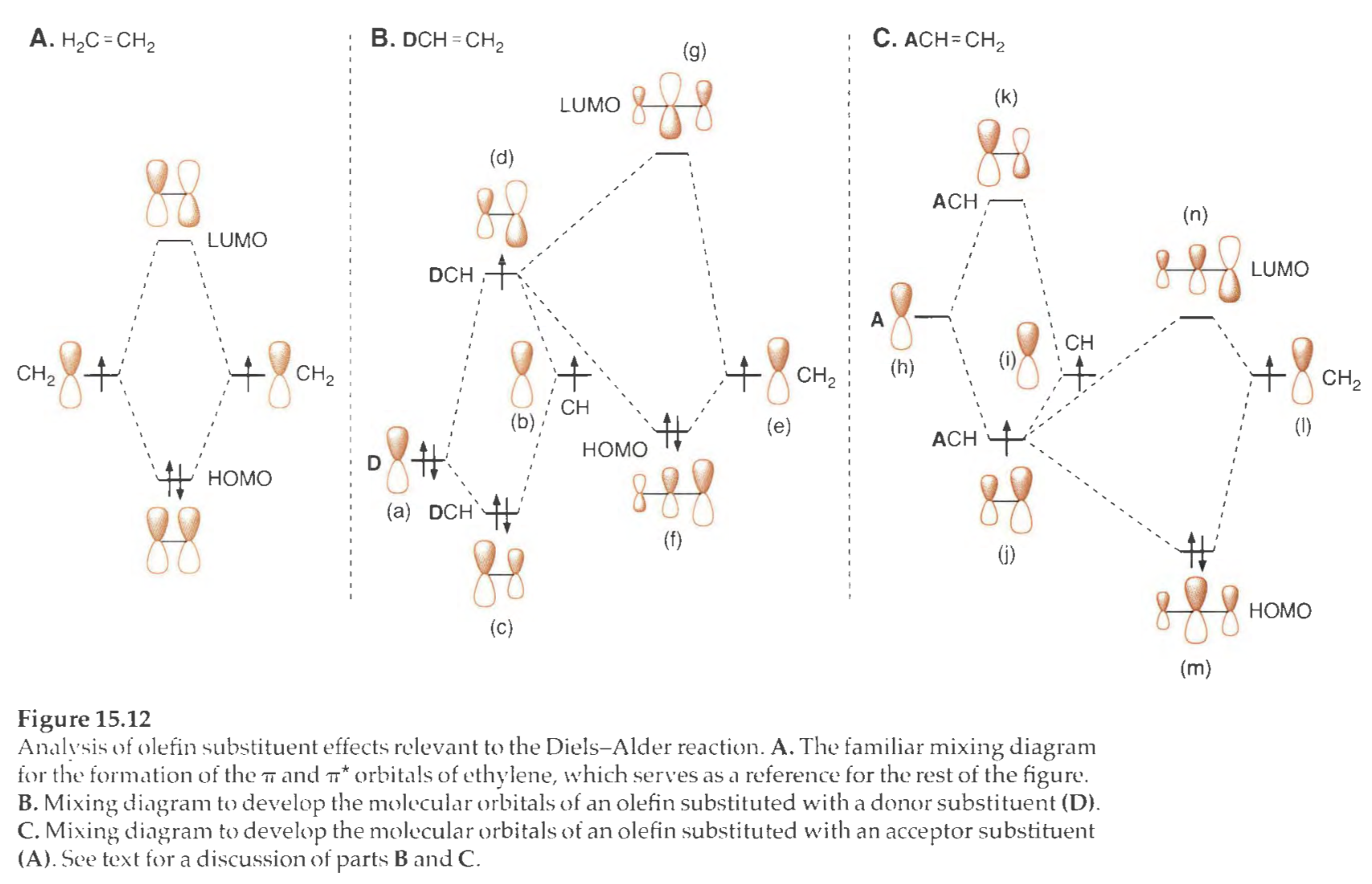 In order to understand why the HOMO of the dienophile is less easily donated, let us again understand the original Diels-Alder properly.

In the original Diels-Alder reaction, there is a close similarity in the energies of the HOMO of the diene and the LUMO of the dienophile. As a result, they form the strongest orbital interactions. The presence of electron releasing groups on the diene and electron withdrawing groups on the dienophile essentially reduce this energy difference even further.

Moving on to the inverse electron-demand Diels-Alder: here, the LUMO of the diene and the HOMO of the dienophile are closest in terms of their energies. Because of this, they form the strongest orbital interactions now, and hence this reaction is able to take place.

As you might have already guessed, the chances of there being a close similarity in the energies of the LUMO of the diene and the HOMO of the dienophile is much less compared to the normal Diels-Alder case. Because of this, we have a greater number of reagents that can undergo the normal Diels-Alder than the inverse one. It's just a question of its rarity than its feasibility, because now you're looking for an electron deficient diene and an electron rich dienophile. In general, due to the resonance stabilisation in dienes, there's a good deal more electron rich dienes than deficient ones, and vice versa for the dienophiles...

I hope that this answers your question.

Not the answer you're looking for? Browse other questions tagged organic-chemistry pericyclic or ask your own question.