How does Le Chatelier's principle apply to a gas phase reaction at constant volume?

This reaction is given in my book and the direction of shift of reaction on addition of $\ce{CO}$ and removal of $\ce{CO2}$ at constant volume is asked. $$\ce{2CO(g) + O2(g) ⇌ 2CO2(g) + \Delta H}$$ If "at constant volume" was not specified, I understand that the forward reaction would occur since the reactant is added and the product is removed, but I do not know if this will vary with constant volume. What will happen in the case of constant volume? Does it matter that there is a change in the number of particles comparing reactants and products? Which direction will the equilibrium shift?

Let's see your formula (with the difference of enthalpy being negative):

When you are adding or removing a reagent or product, and all components are in a gaseous state, you are changing the pressure and you can study the reaction by $K_p=\dfrac{P^2_\ce{CO2}}{P^2_\ce{CO}P_\ce{O2}}$.

If you change concentration of $\ce{CO}$ you are changing the pressure it, too.

But you can change also the pressure, by changing the volume. (For Boyle's Law: the absolute pressure exerted by a given mass of an ideal gas is inversely proportional to the volume it occupies if the temperature and amount of gas remain unchanged within a closed system). 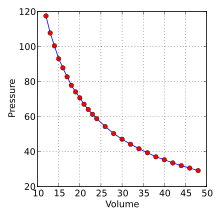 Other option is to change the pressure by adding or removing an inert gas, but since it don't intervenes in the reaction, the equilibrium is not affected.

You have to be careful about the physical state of reactants and products when making such a broad statement. In the reaction $$\ce{NaCl(s) <=> Na+(aq) + Cl-(aq)},$$

In general, the concentration (or partial pressure) of at least one of the species has to be changed in order to disturb an equilibrium (unless of course you change K by changing the temperature).

What will happen in the case of constant volume?

This, I think, is supposed to make the question easier, not harder. If you add a substance at constant volume, you know that the partial pressure (the concentration) of that substance will increase while the other partial pressures remain the same.

At constant pressure, however, the other partial pressures change too. You could have a reaction where the small changes in partial pressure of the other species has a larger effect on the equilibrium, and a shallow application of Le Chatelier's principle will yield an incorrect answer:

If this system is at equilibrium with equal partial pressure of A and B, and I add some A at constant pressure, the partial pressure of B would drop (I am "diluting" B by adding more A). Because B has the higher coefficient (higher exponent of the concentration of B in the equilibrium expression), there would be a reverse reaction toward equilibrium. This is not what you might expect.

So, the question avoids that complication by saying "at constant volume".

Not the answer you're looking for? Browse other questions tagged equilibrium gas-phase-chemistry or ask your own question.

3
Will the total equilibrium pressure increase in gas phase reaction PCl5(g) = PCl3(g) + Cl2(g) after chlorine is removed?
1
Addition of inert gas at "constant volume"?
2
Le Chatelier's principle: what are the effects of decreasing volume?
1
Where the equibrium will shift when we add one mole to both reactants and products in PCl5 giving PCl3 and Cl2
1
How do molecules know how to behave when a disturbance occurs in an equilibrium?
4
Le Chatelier’s principle when pressure of gases increased with the same stoichiometric coefficient
1
Question about change in pressure and change in temperature for system at equilibrium
2
Can we have an equilibrium constant for a reaction at constant volume?