In preparing sulphonilamide, why is aniline acylated if the acyl group has to be removed later?

Our professor talked about the six stages of the synthesis of sulfa-drugs, which are:

If we skip step 3, and let aniline react with chlorosulfonic acid, and then go till step 5, could sulfonamide be synthesized? Why do we perform acylation of aniline if we just have to remove the acyl group by subsequent hydrolysis later? 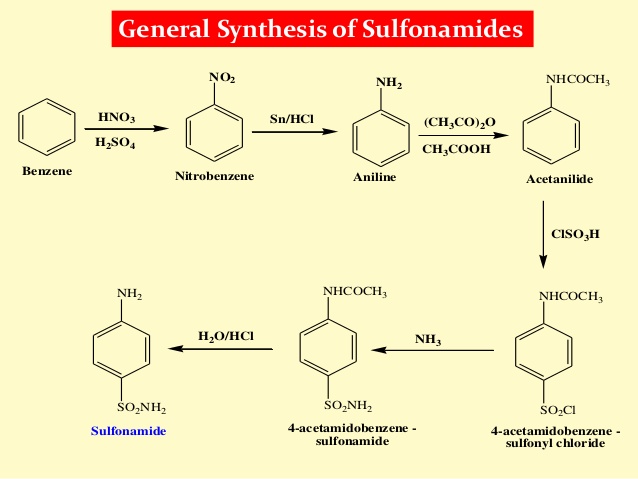 organic-chemistry aromatic-compounds
Share
Improve this question
edited May 9 '18 at 8:00

The main problem encountered during electrophilic substitution reactions of aromatic amines is that of their very high reactivity. Substitution tends to occur at ortho- and para-positions. If we have to prepare monosubstituted aniline derivative, how can the activating effect of –NH2 group be controlled ?
This can be done by protecting the -NH2 group by acetylation with acetic anhydride, then carrying out the desired substitution followed by hydrolysis of the substituted amide to the substituted amine

The lone pair of electrons on nitrogen of acetanilide interacts with oxygen atom due to resonance as shown below:

Hence, the lone pair of electrons on nitrogen is less available for donation to benzene ring by resonance. Therefore, activating effect of –NHCOCH3 group is less than that of amino group.

Moreover, in the strongly acidic medium, aniline is protonated to form the anilinium ion which is meta directing.

However, by protecting the –NH2 group by acetylation reaction with acetic anhydride, the reaction can be controlled and the p derivative can be obtained as the major product.

7
Why methyl group is 2,4-directing?
5
Transformation of acyl group to carboxyl group in biphenyl system with two acyl groups at para position
8
Why is the nitroso group a deactivating group for electrophilic aromatic substitution?
4
Nucleophilic acyl substitution leaving group
3
Comparing the basicity of aniline and ortho anisidine
0
Can benzene ring be the part of a acyl group
6
Why is formyl chloride unstable while higher acyl chlorides are stable?