Attack of ethoxide on epichlorohydrin

I eliminated the possibility of the first two options since they included an alcohol and the solvent has not been specified so we do not know whether it is polar protic or polar aprotic.

As for the next two options I drew both of their mechanisms are they correct?

The answer given is D. Is it because the carbon next to oxygen is more electrophilic?

organic-chemistry halides nucleophilic-substitution
Share
Improve this question
edited May 8, 2018 at 9:55

In general, you can expect an epichlorohydrin to be attacked nucleophilically only on the outer epoxide carbon. First, let me present the synthetic argument: In their total synthesis of RK-397, Burova and McDonald used epichlorohydrin as the starting point for the synthesis of their C10–C16 fragment. The fragment synthesis is shown in the scheme below which is taken directly from their publication. 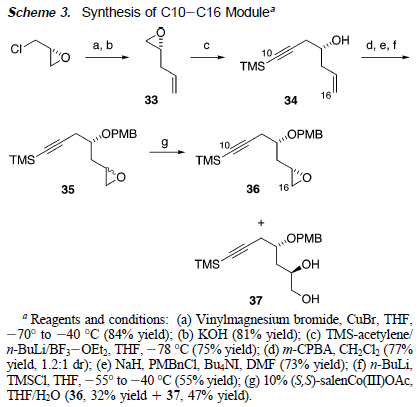 They start with an enantiopure epichlorohydrin which they open using vinylmagnesiumbromide. The resulting alcohol is recyclised under elimination of chloride by distilling from $\ce{KOH}$. Starting from (R)-epichlorohydrin, their sequence exclusively generates (R)-33. Epoxidation gives 35 as a mixture of diastereomers which they separate using hydrolytic kinetic resolution with the Jacobsen cobalt catalyst.[1] This procedure acts only on the epoxide and selectively cleaves the (R)-epoxide to a diol. If there had been substantial amounts of (S)-33, 36 and 37 would each have been isolated as a mixture of diastereomers; however, both were isolated as single diastereomers.[2]

If there had been any direct attack of the vinyl Grignard on the $\ce{C-Cl}$ bond with direct displacement of chloride, the opposide enantiomer (S)-33 would have been formed (see scheme 1 below; 33 would have been inert to $\ce{KOH}$ and thus simply been co-distilled). This would have led to the aforementioned mixture of diastereomers further down the synthesis. Since no mixtures were observed, we can safely conclude that the attack only happens under cleavage of the $\ce{C-O}$ bond.

Scheme 1: Hypothetical attack on $\ce{C-Cl}$ gives the opposite enantiomer; would lead to 36 and 37 being isolated as a mixture of diastereomers.

The synthetic argument already establishes that epoxide-cleavage must be orders of magnitude faster than chloride displacement. This does allow the question: why? One general argument is that the epoxide is highly strained, so a ring-opening attack will release the ring strain. Furthermore, $\ce{C-Cl}$ bonds are rather strong compared to other halogens (especially $\ce{C-I}$) and thus not as easily cleaved. Furthermore, we are likely looking at some hyperconjugation effects: the orbitals of the $\ce{C-Cl}$ bond and the $\ce{CHR2-O}$ bond can overlap as shown in scheme 2; this interaction leads to the chloride displacement attack being further disfavoured.

Coming back to your question, since the outer epoxide carbon is marked and since that is where ethanolate will attack, only (D) is correct and your proposed mechanism checks out.

3
Solvents in substitution reactions
2
Why is sodium methanethiolate still a better nucleophile than sodium methoxide when the solvent is ethanol
16
Nucleophilicity/basicity in protic and aprotic solvents
1
Which lone pairs/bonding pairs go into which pi molecular orbitals?
13
Significance & applications of polarizability for nucleophiles
4
Deciding more electrophilic centre between ester and thioester for SN type reaction
28
Explanation for the trends in nucleophilicity—Orbital interactions or electrostatic attraction
1
How do quaternary ammonium salts catalyse SN2 reactions?