Which has stronger hydrogen bonds: water or ice?

As ice is the solid form of water and it has more hydrogen bonds than water, because it's oxygen atoms are precisely tetrahedrally positioned and each oxygen is hydrogen bonded by four neighbouring oxygen atoms.

This changes the density of ice by expanding it, but does it change the strength of hydrogen bonds of ice? Or more precisely, which one has strong hydrogen bonds, water or ice?

The quick answer is that ice has stronger hydrogen bonds than liquid water on average.$\require{mediawiki-texvc}%for angstrom unit$

As has already been brought up, this question is not easy to answer comprehensively as it may very well depend on temperature and pressure in ways that are not immediately obvious. That being said, I will answer this question for the most obvious case which is looking at hydrogen bond strength when water is just barely a liquid (just above $\pu{0~^\circ C}$) and when water is just barely frozen (just below $\pu{0~^\circ C}$). Also, as you may or may not know, ice freezes into many different forms which all have different lattice arrangements. I cannot speak to unusual forms of ice such as the one with a cubic lattice, but what I say is immediately applicable to forms like proton-ordered hexagonal ice (I think this is ice IX). Regular ice is called ice Ih.

It is worth looking at the very comprehensive reference [1], which discusses details of water from the dimer all the way to the many forms of ice which can form. The important points for us are only the following structural values, however:

In ice Ih, the average $\ce{O-H}$ bond length is $\pu{1.01 \AA}$ and the $\ce{HOH}$ bond angle is $109.5^\circ$. The trend which has been observed experimentally is that in going from the gas-phase water monomer, through the clusters, to the liquid, and finally to ice, the bond angle slowly increases to this tetrahedral value. Additionally, the average bond length in the liquid is shorter than in the solid, but you will have a hard time finding reliable reported values of this number from experiment because it is very difficult to determine the position of hydrogen atoms from scattering experiments in non-solid phases (this is mostly because of an ambiguity as to which oxygen atoms a hydrogen should be associated with in the scattering data). Nonetheless, there are reliable average $\ce{O-O}$ distances from scattering experiments.

In the liquid, the average $\ce{O-O}$ distance is $\pu{2.85 \AA}$ while in ice Ih it shrinks to $\pu{2.74 \AA}$. Intuitively, it is very hard to understand how this would happen if it is not simply due to increased hydrogen bond strength.

Ref. [2] gets at a very important point for us, one which Ref. [1] also uses to explain the shrinking in $\ce{O-O}$ distances in ice. This is that hydrogen-bonding in water highly cooperative. What do I mean by this? This is exactly the topic of Ref. [2]. The key idea is this: when you allow three water molecules to mutually hydrogen bond, as in the ring shape of the water trimer, the increase in attractive interaction strength is more than simply three times the interaction strength of a water dimer. By attractive interaction strength, I mean that if you subtract out the initial decrease in binding energy which comes from distorting the water monomers. Again, all of this is laid out in detail in Ref. [2], but we learn the general rule that many-body interactions in water are very important.

So, finally, I feel we have said enough to explain why the knowledge that a shrinking $\ce{O-O}$ distance and widening $\ce{HOH}$ angle tells us that ice has stronger hydrogen bonds than liquid water. In the first case, the decreasing $\ce{O-O}$ distance means that every pair of monomers experiences greater nuclear repulsion. This must be at least offset by a greater hydrogen bond strength in order for this geometry to be favorable. Part of the way this repulsion is offset is that as the system cools and forms a solid, the hydrogen-bonds are allowed to become more ideal. This is why the bond angle widens. The tetrahedral arrangement of atoms means that the $\ce{OH--H}$ hydrogen-bond angle is much closer to 180 degrees on average than in the liquid where it frequently deviates fairly significantly.

There is one last point to make. It can be estimated both from accurate simulations and from experiment what is the average dipole moment of a water monomer in bulk liquid and in ice. It is found that the dipole increases going from the liquid to ice. This additionally tells us that the average charge on each hydrogen atom must have increased from in the liquid. We are guaranteed this because we know the bond angle increased, which should generally decrease the dipole moment (a linear configuration has no dipole). Instead, the bond angle increases, so we get more ideal hydrogen bonds, and the charge increases, so the hydrogen bonds would be stronger even if they were no more ideal than in the liquid!

Hopefully this rather long-winded answer helps you understand how we can take the evidence at hand to arrive at the conclusion that ice has stronger hydrogen bonds than liquid water.

Now to the question of different forms of ice and different temperatures and pressures. I would think that pretty much across the board, every form of ice will follow the same trends we have seen here and hence have stronger hydrogen bonds. One strange case is cubic ice, which has $\ce{OHO}$ angles somewhere close to 90 degrees. This is very strange, but should lead to a large increase in the dipole of each molecule and probably increase in positive charge on each hydrogen atom, so even then the hydrogen bonds should be stronger than in the liquid.

In liquid state of water the atoms will be having so much kinetic energy that they cannot form permanent bonds.

The hydrogen bonding in ice(hex) is about 3 kJ ˣ mol-1 stronger than liquid water. According to this paper http://www1.lsbu.ac.uk/water/water_hydrogen_bonding.html 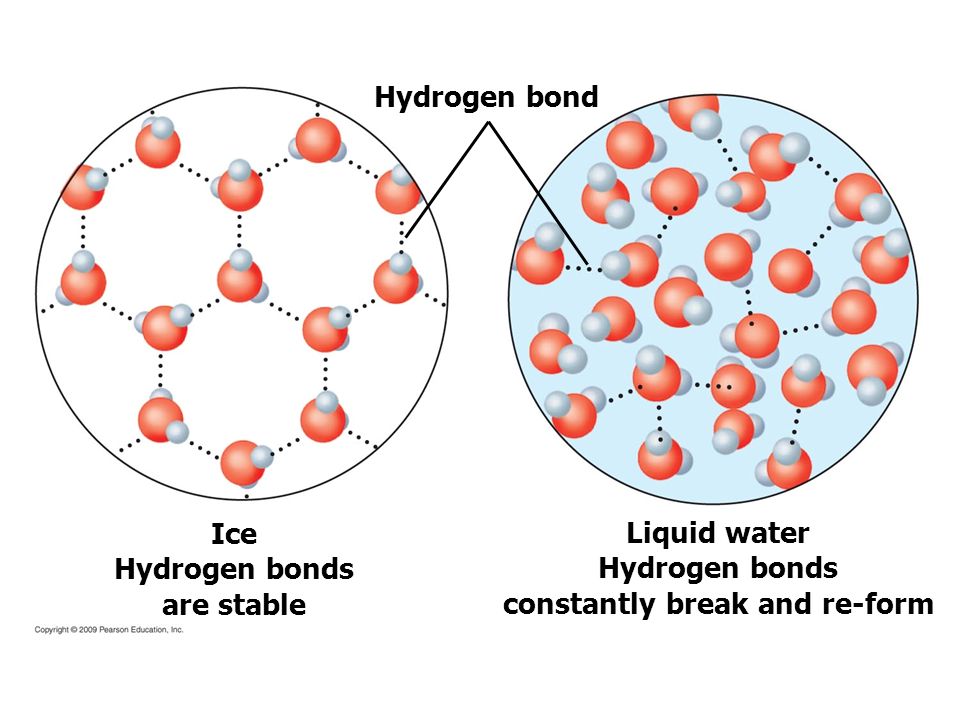 this is a nice video i found on youtube :) https://www.youtube.com/watch?v=UukRgqzk-KE

Water has stronger hydrogen bonds than ice does.

Liquid water is denser than ice. Since water and ice are both made of H2O molecules, the fact that water is denser means the H2O molecules are closer together in water than they are in ice. This means the intermolecular forces attracting one H2O molecule to another must be stronger in water than they are in ice. Since hydrogen bonds are the primary intermolecular forces in H2O, the hydrogen bonds in liquid water are stronger than those in ice.

6
Hydration number: Carbonic acid in water
6
How many hydrogen bonds in these compounds?
2
Does clay absorb water because of polarity?
0
Energy of hydrogen bonds vs. kinetic energy of water molecules
3
Why is the boiling point of water and ammonia so different?
2
Hydrogen Bonding in Water Phase Changes
13
Is the strength of hydrogen bonding greater in hydrogen peroxide or water?