Why does a six-membered ring contract in this SN1 reaction?

I was watching this video on Khan Academy (YouTube link) regarding SN1 mechanisms and carbocation rearrangements and came across this mechanism.

At around timestamp 4:20 in the video, why does step 2 take place where the ring contracts to 5 carbons? Surely it would be far easier to simply have a methyl shift from the carbon in blue which would also result in a more stable tertiary carbocation. 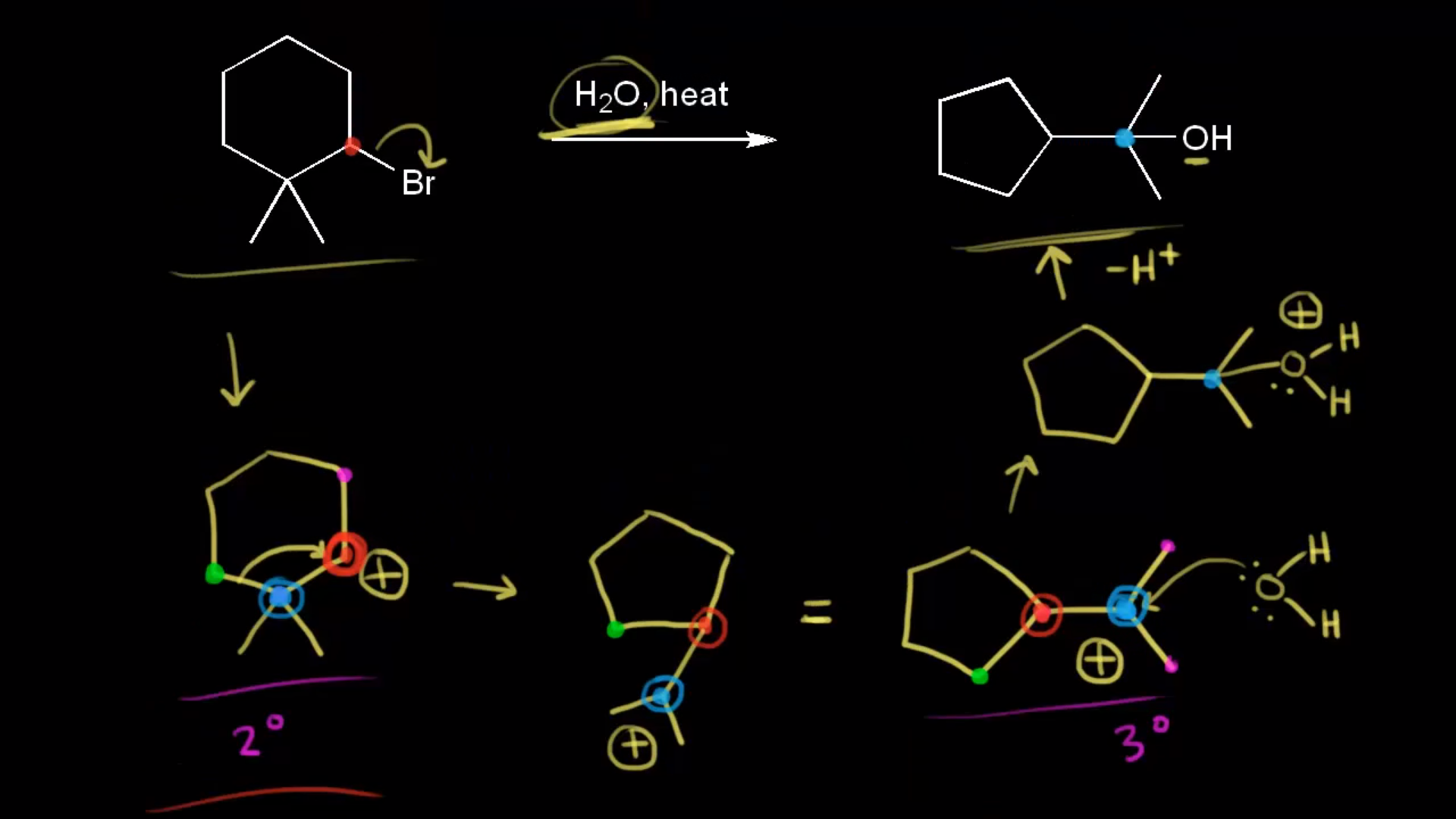 organic-chemistry halides nucleophilic-substitution
Share
Improve this question
edited May 6 '18 at 18:00

A cursory look through several organic chemistry texts (Clayden, Carey, March, Vollhardt) as well as SciFinder doesn't reveal any instances of the same reaction used in the Khan Academy video - this would imply that either the reaction is made up to illustrate a point (albeit not very well) or comes from somewhere more obscure (historical literature in a language other than English).

The first question that it would be useful to answer is whether the reaction proceeds via an SN1 or SN2 pathway, or, to phrase this a more accurate way, to what extent is the halide dissociated at the time when the rearrangement occurs.

In general, secondary halides can undergo both SN1 or SN2 reactions depending on the conditions used (substitutions at secondary centres are always hard to predict, and often go with neither complete inversion nor complete racemisation). In March's Advanced Organic Chemistry, the chapter on cationic rearrangements summarises:

The SN1-type process occurs mostly when B is a tertiary atom or has one aryl group and at least one other alkyl or aryl group. In other cases, the SN2-type process is more likely.

If we accept that the reaction goes via an SN2-like pathway, we must then acknowledge the stereoelectronic requirement that the migrating group must be able to interact with the C-Br σ* orbital.

This requirement immediately rules out the migration of the exocyclic methyl group, leaving only the internal C-C bond to migrate (assuming that bromine adopts the equatorial position and the ring sits on a chair-like conformation - both of which are reasonable assumptions). 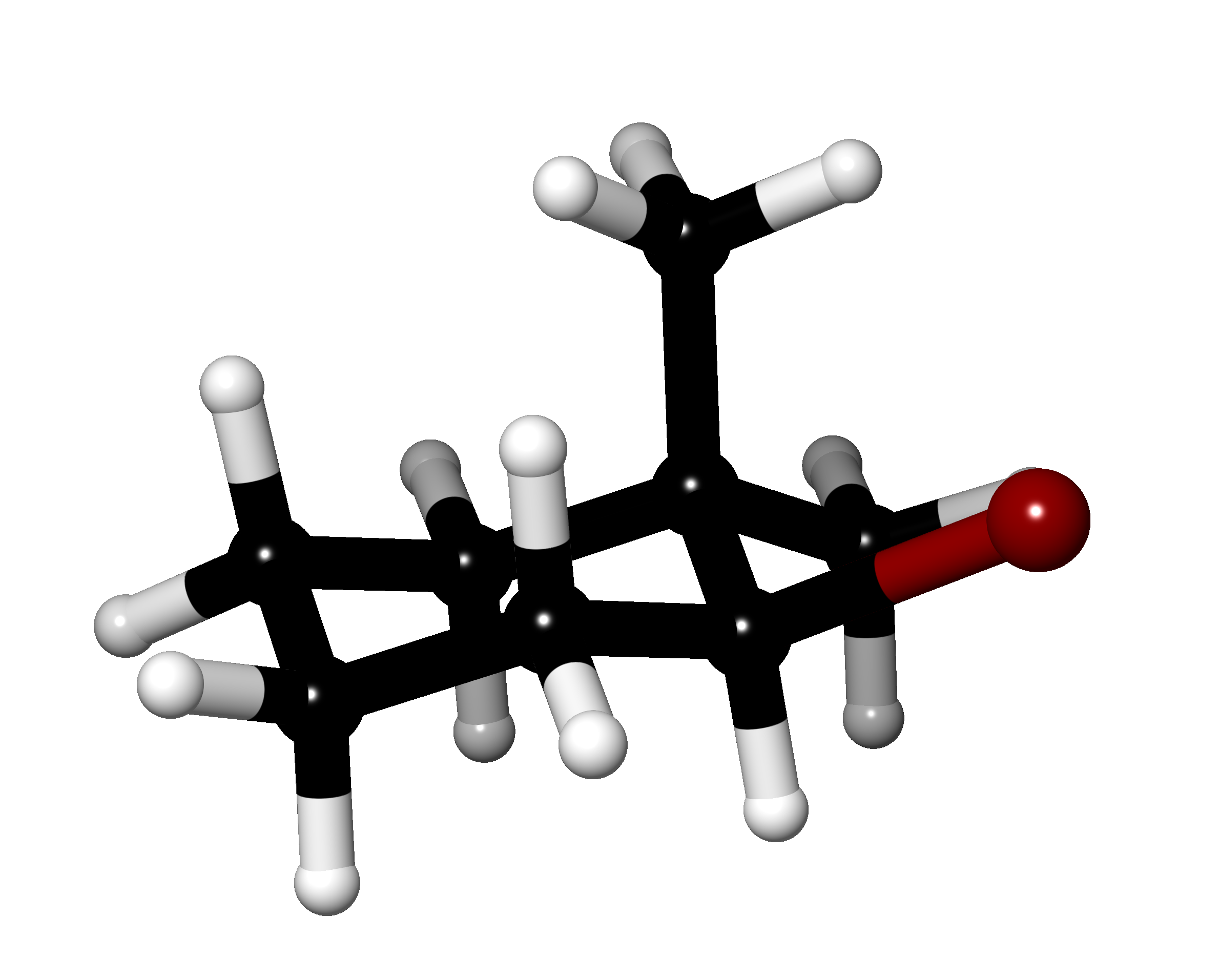 Even ignoring the steroeelectronic issues, migratory aptitude would favour rearrangement of the internal C-C bond as it is marginally more able to stabilise the developing positive charge during the rearrangement.

In the absence of the original literature, it's hard to say with certainty which group migrates (though it would be an easy experiment to carry out....). That said, following the general trends for rearrangements/migrations found in undergraduate organic chemistry texts, it would seem most likely that the rearrangement takes place as shown rather than the competing 1,2-methyl shift (we're also ignoring the possibility of a proton elimination to give an alkene).

6
What are the products in this SN1 reaction?
51
Regioselectivity of acid-catalyzed ring-opening of epoxides
0
Why does this reaction not proceed by sn1/sn2?
8
Conformation of six-membered ring constituting a bridged compound
9
Why don't hydride shifts occur with hydrohalogenation of 4-methyl-cyclohexene?
7
NGP mechanism vs the simple carbocation mechanism
19
Why are two three-membered rings preferred to a single five-membered ring in the reaction of a dihalide with alcoholic KOH?
0
Is 1,3 alkyl shift allowed in Cyclobutyldicyclopropylmethyl Cation?
9
Effect of substituents on arene oxide-phenol rearrangement